Renault has revealed pricing and specs for the limited-run Mégane RS Trophy-R.  Just 32 examples are destined for the UK, starting at £51,140.

That price includes special Öhlins shock absorbers and an Akrapovic exhaust, alongside Brembo brakes, while a carbon bonnet and diffuser are part of a comprehensive weight reduction programme to offer increased performance.

It's far from the most expensive Trophy-R on offer, however. A £63,140 'Carbon wheel pack' variant is offered, which receives for Carbon Revolution alloy wheels, reducing unsprung weight by 2kg a corner.

That's not all, however. The most extreme version offered is the Nürburgring Record Pack, priced at £72,140. For that you get a car claimed to be the same spec as the car that set the hot hatch lap record at the fearsome German circuit. 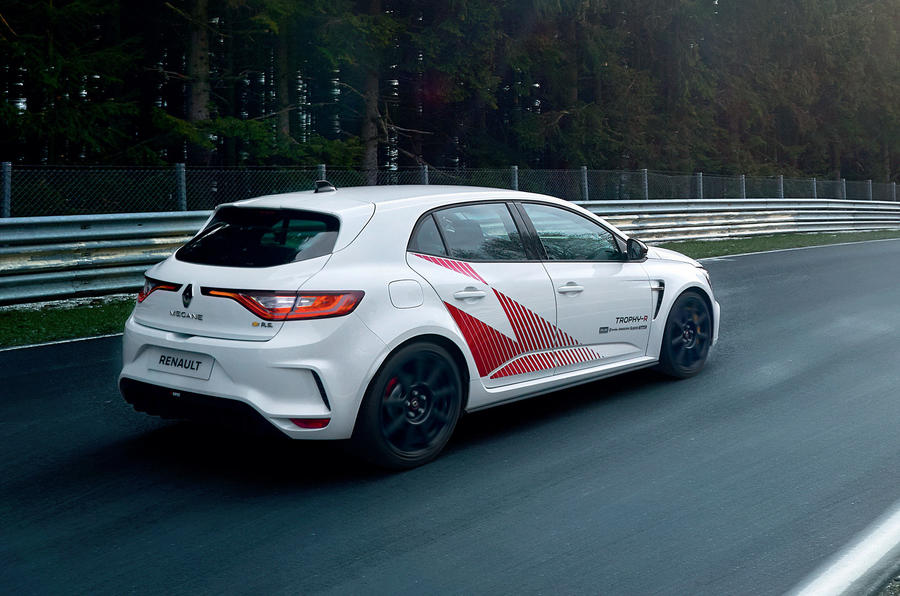 The new range-topper features the same highly tuned 1.8-litre turbo engine as the Mégane RS 300 Trophy, which produces 296bhp and 295lb ft of torque. The 0-62mph time drops 0.3 sec from the standard car to 5.4sec, while the top speed increases by 2mph to 163mph.

Renault says that the Trophy-R is 130kg lighter, due to a weight saving programme led by Renault Sport, which developed the new model with the same approach taken on a racing car.

The Trophy-R is claimed to feature improved aerodynamics and a reworked chassis drive axles to boost performance. That maintains the ethos of previous generations of Trophy-R, which have been focused on extracting performance through handling and dynamics, rather than purely relying on power.

Renault claims to have set a new front-wheel-drive production car lap record at the Nürburgring Nordschleife with a high-specced Trophy-R. According to Renault, the car lapped the 12.80-mile Nordschleife in 7min 40.10sec on 5 April, and also posted a time of 7min 45.39secs on the full 12.94-mile layout. It has previously been spied in action on the German race track.

The front-wheel-drive production car record at the Nürburgring was previously held by the current Honda Civic Type R, which lapped the track in 7min 43.80sec.

a mercedes A 45 s is way nicer and its more powerful and its AWD and its a mercedes.

£72k for a nurburgring

£72k for a nurburgring special, wow that is steep, thing is there is nothing else like it, it's a limited run track special which has Motorsport engineering running right through its DNA, from what has been written about it there seems a to be a lot of engineering integrity to it as opposed to just a re map, lowering and throwing out the rear seats, it's competitors are the track day specials like the bac mono and Atoms and radicals etc. I reckon it'll sell but if they didn't restrict the numbers they would never shift loads.
jason_recliner 31 July 2019