BACK TO ALL NEWS
Currently reading: New Mini Countryman 2020 facelift seen in disguise
UP NEXT
Entry-level SUVs on the way from Volvo and Polestar

Mini will update its Mercedes GLA rival with mid-life revisions: reveal likely in the first half of next year
Open gallery
Close
Share story

Mini will follow up the updates to the rest of its range with a revised Countryman due next year.

The crossover is the British maker’s newest model, but was first launched in 2017, so 2020 falls perfectly in line with the usual timeframe of a mid-cycle update.

Prototypes have been spotted with disguised front and rear ends, so we’re expecting mild revisions to the grille, bumpers and lights as part of a minor facelift.

The introduction of adaptive matrix-beam LED headlights is also on the cards, alongside standard LED tail-lights that bring the now-familiar Union Jack, new personalisation options and a fresh range of wheel designs.  The majority of the changes are likely to be aesthetic. 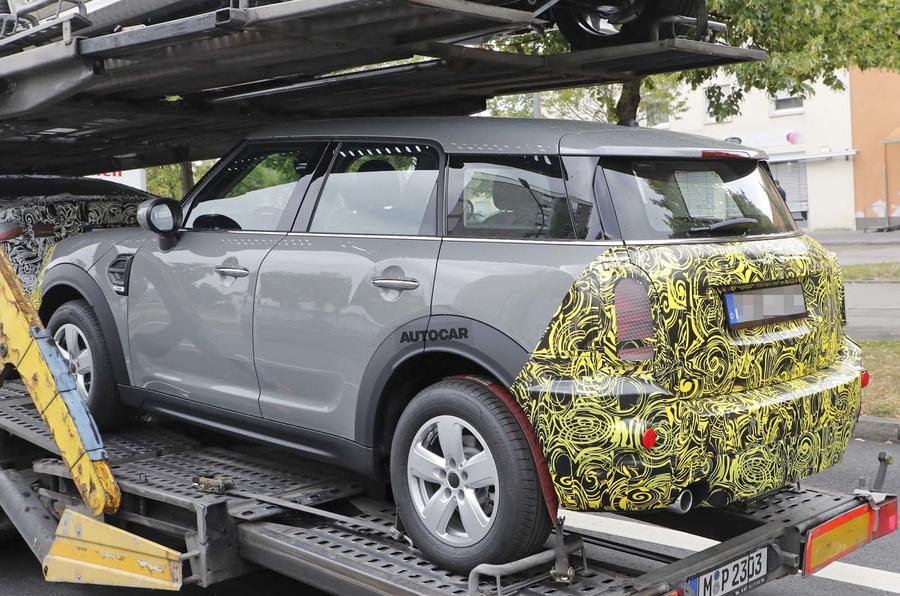 Recent range updates have boosted standard equipment across other Minis, so that should also be the case with the Countryman. The recently updated Clubman also featured a new sports suspension option with 10mm lower ride height.

Engine choices should remain unchanged and include the familiar 134bhp 1.5-litre three-cylinder petrol in the Cooper, a 189bhp four-cylinder in the Cooper S and the newly launched John Cooper Works model, with a new 302bhp 2.0-litre engine.

A 148bhp Cooper D diesel will also be retained, though it’s not clear yet if Mini will need to use mild-hybrid tech to reduce its fleet average CO2 figures in time for 2021’s emissions regulation changes. Expect more details of the Audi Q2 rival to emerge early next year.

That looks much better

Although it would look better still in the dark, from a great distance.