BACK TO ALL NEWS
Currently reading: New Mercedes-Benz A-Class to be more driver-focused, plus prototype ride
UP NEXT
MST Mk1: Is this the ultimate rally recreation?

New Mercedes-Benz A-Class to be more driver-focused, plus prototype ride

A number of improvements to the steering, suspension and chassis are set to enhance the driving experience
Open gallery
Close

The new 2018 Mercedes A-Class, which will be revealed ahead of its public debut at Geneva motor show in March, will depart from today’s model by receiving two different suspension sets, according to Mercedes' boss of compact vehicle testing Jochen Eck.

Both sets will use the same MacPherson strut set-up at the front, although they differ radically at the rear, with lower-end models set to run a newly developed torsion beam arrangement while high-end models will sport a revised version of the multi-link suspension first seen on the outgoing third-generation A-class.

Eck said: “We knew we had to improve the ride. The whole class has moved on since we launched the old model. We’ve spent a lot of time tuning the bushings and kinematic properties of both systems to get the result we were looking for. The added torsional rigidity of the body structure helps a lot, too.” 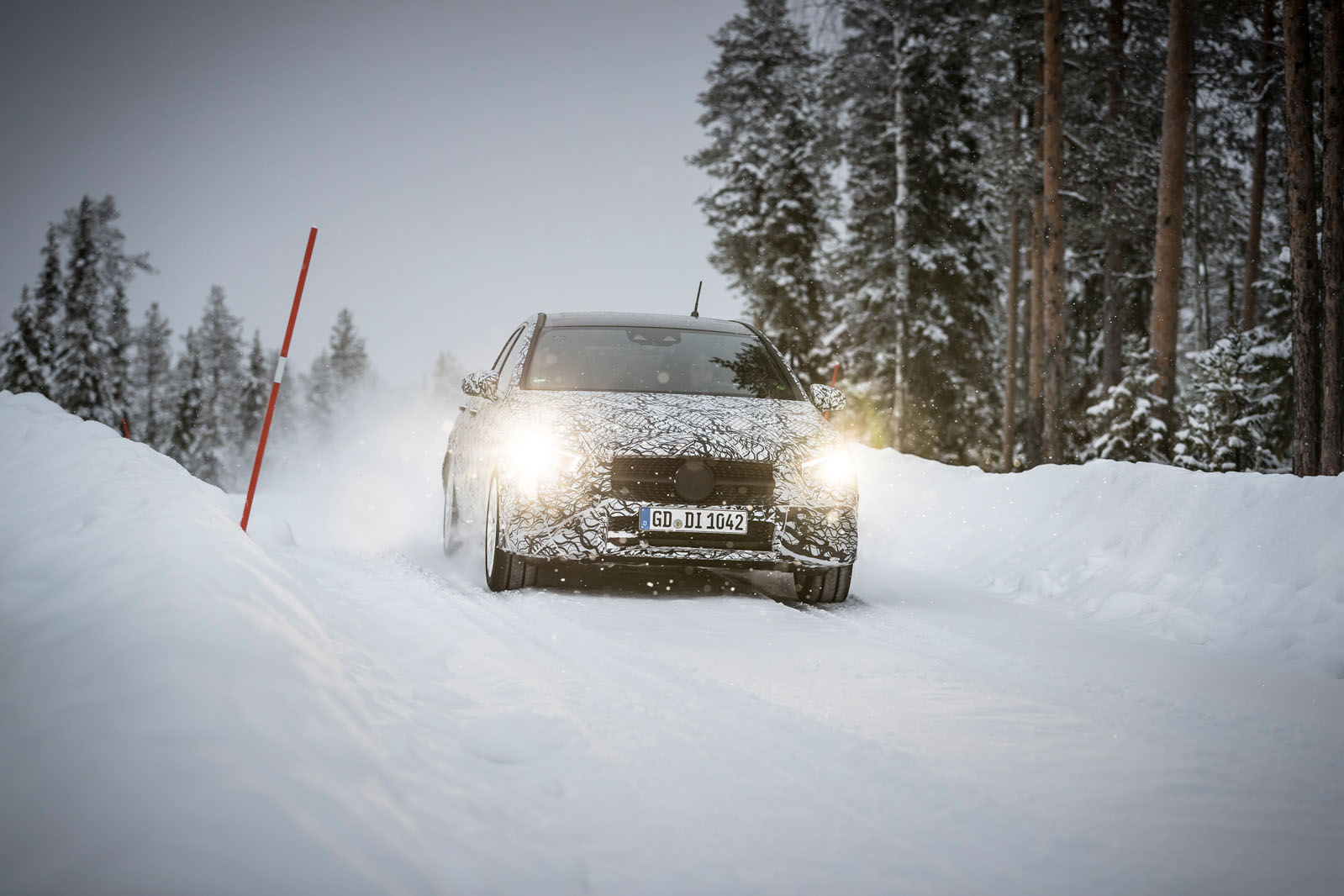 That rigidity also helps improve noise, vibration and harshness in the A-Class, along with more sound deadening foam in the body structure, according to Eck. He said that while the predecessor’s NVH “wasn’t too bad at launch”, the competition has upped its game.

The new A-Class’s electro-mechanical steering continues to offer a fixed ratio or variable ratio depending on the chosen model, but the car maker has made some changes, including a repositioning of the rack so it now sits further back in the chassis. Eck said: “It is still quite light in overall weighting and fairly direct in comparison to the competition, but there’s definitely more feedback and communication than before. I think enthusiast drivers will like it. There’s more on-centre precision, but it doesn’t come at the expense of off-centre sharpness.”

Mercedes has also worked on improving visibility from the A-Class, with Eck recognising that it was “a problem” with the predecessor. “The pillars are now thinner and the rear side windows are also larger," said Ek. "There is much better vision to the rear.” 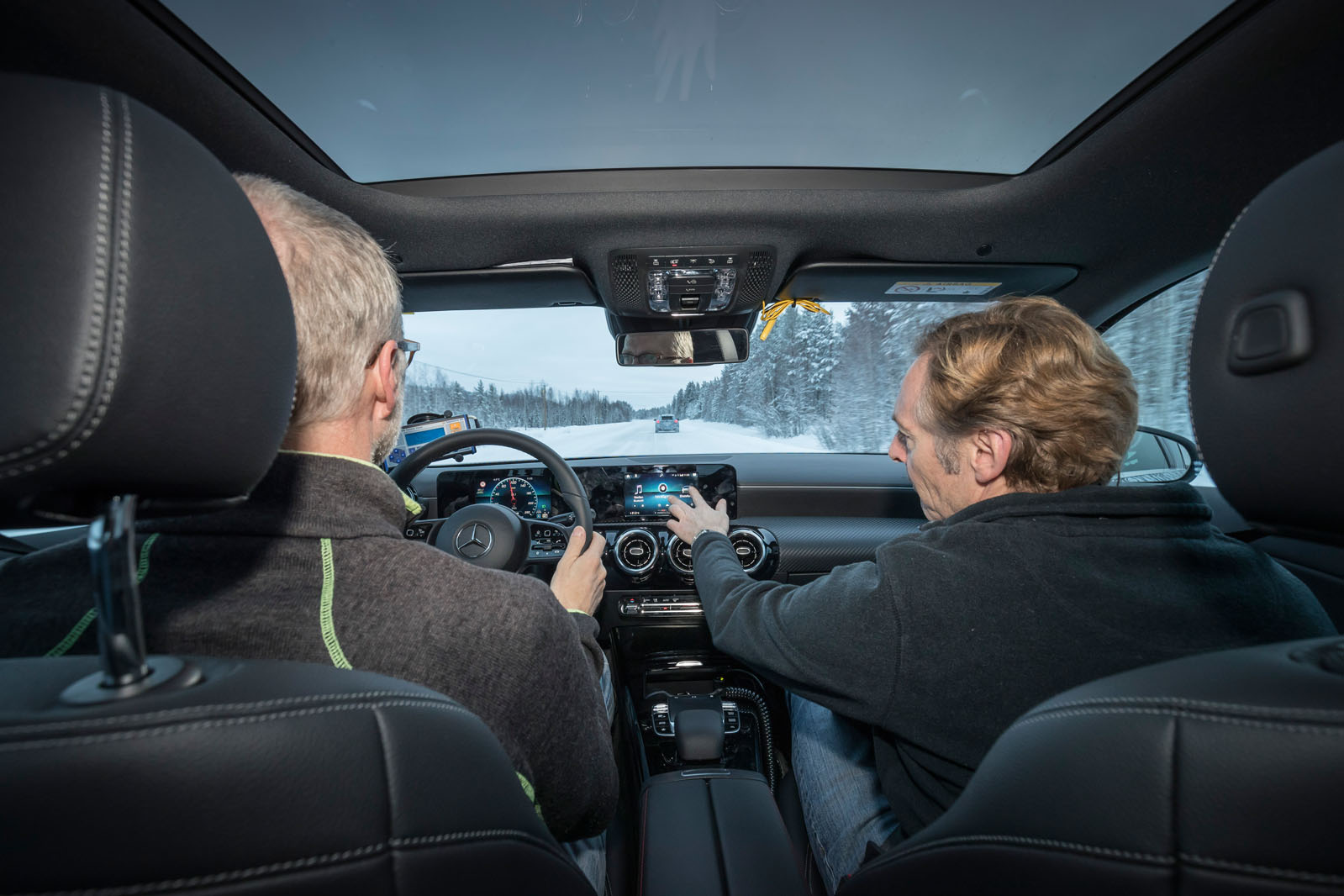 The redesigned A-Class has grown in length, including a 30mm increase in the wheelbase, while the interior gets a similar widescreen cockpit to that found in the S-Class, with the most expensive option using two 10.3in displays. It will also feature touch operation for infotainment and navigation, a first for Mercedes.

The new A-Class will adopt a number of driving aids seen on higher-end Mercedes, including an active blind spot assistant, called Exit Assist, and an improved version of the existing model’s Park Assist, with 360deg camera.

There will be five petrol variants plus two performance models, badged A35 and A45, and four diesel options. 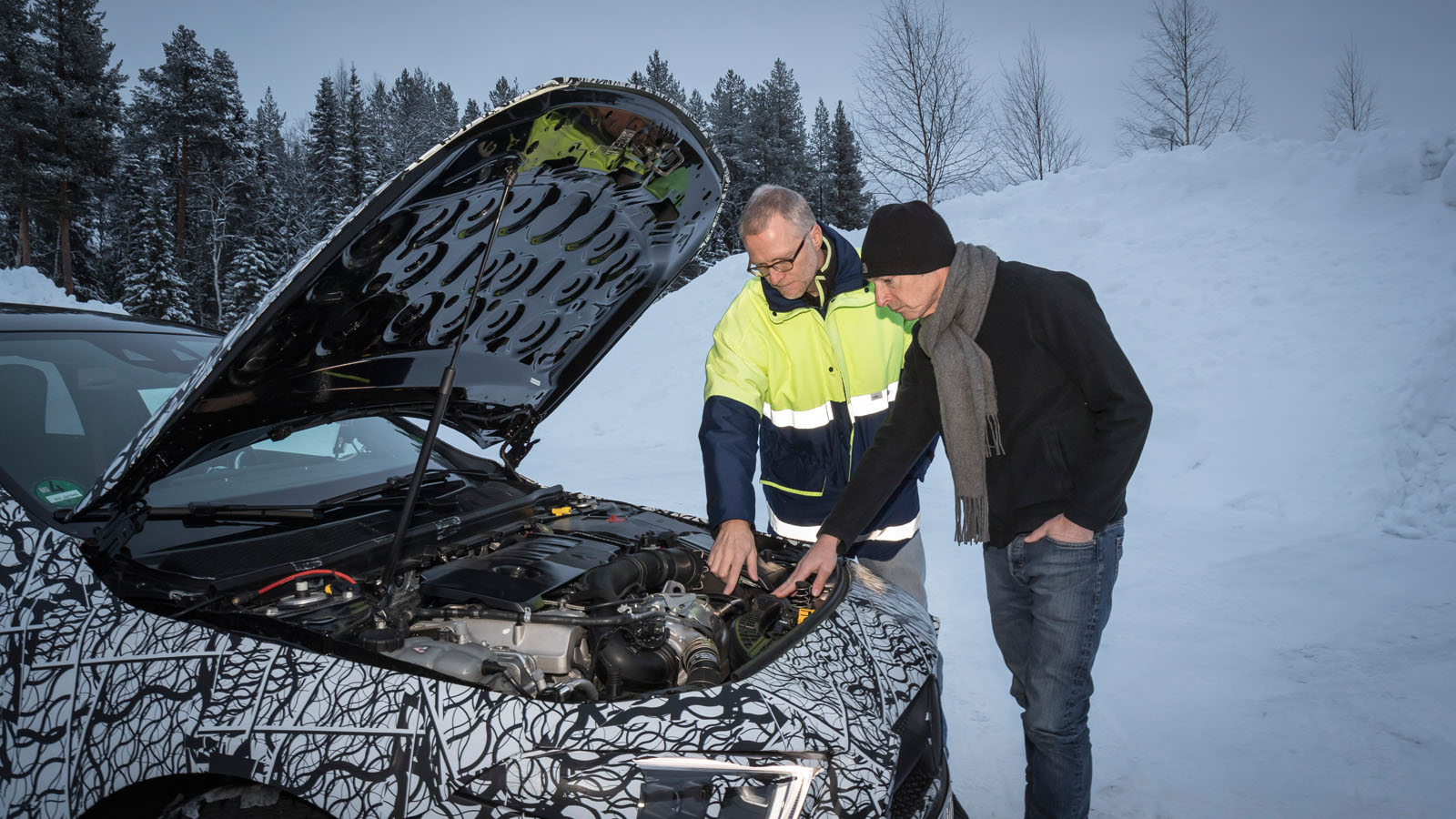 A first ride in the new A-Class:

For our first stint in the new A-Class, we’re in the entry-level diesel variant, the 1.5-litre A160d, on public roads near Arvidsjaur in the north of Sweden, where Mercedes has been busy cold-weather testing its entry-level model.

Although we’ve only experienced the new Mercedes from the passenger seat, it certainly feels smoother and more controlled than its predecessor over rough roads, even with the torsion beam set-up and standard single rate dampers – the cheaper of the two suspension set-ups. 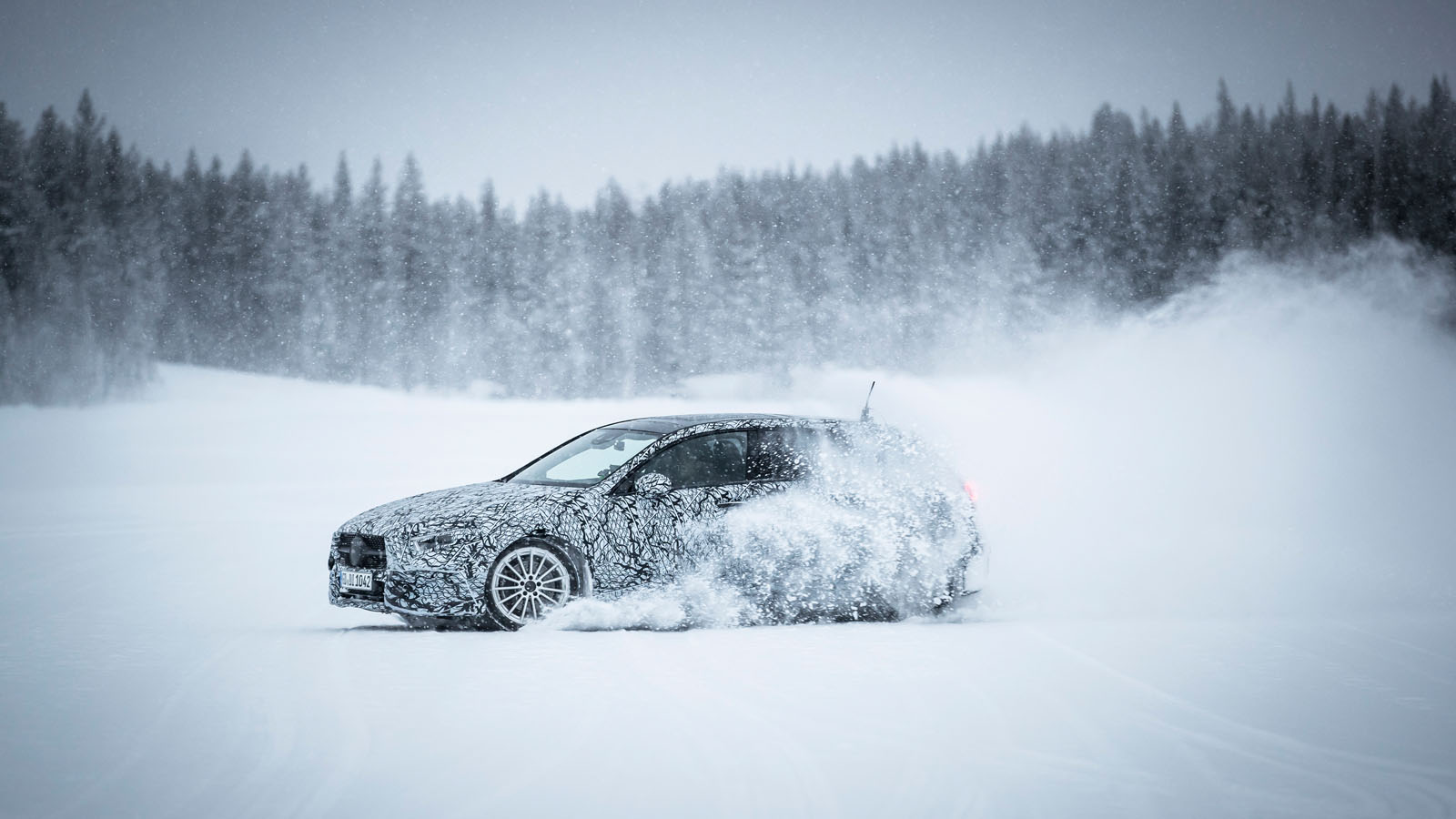 There’s greater absorption of road shock and less vertical movement over bumps, particularly at the rear.

As well as improvements in comfort, the noise, vibration and harshness levels are also better, and visibility appears superior, although we won’t know for sure until we are behind the wheel next year. 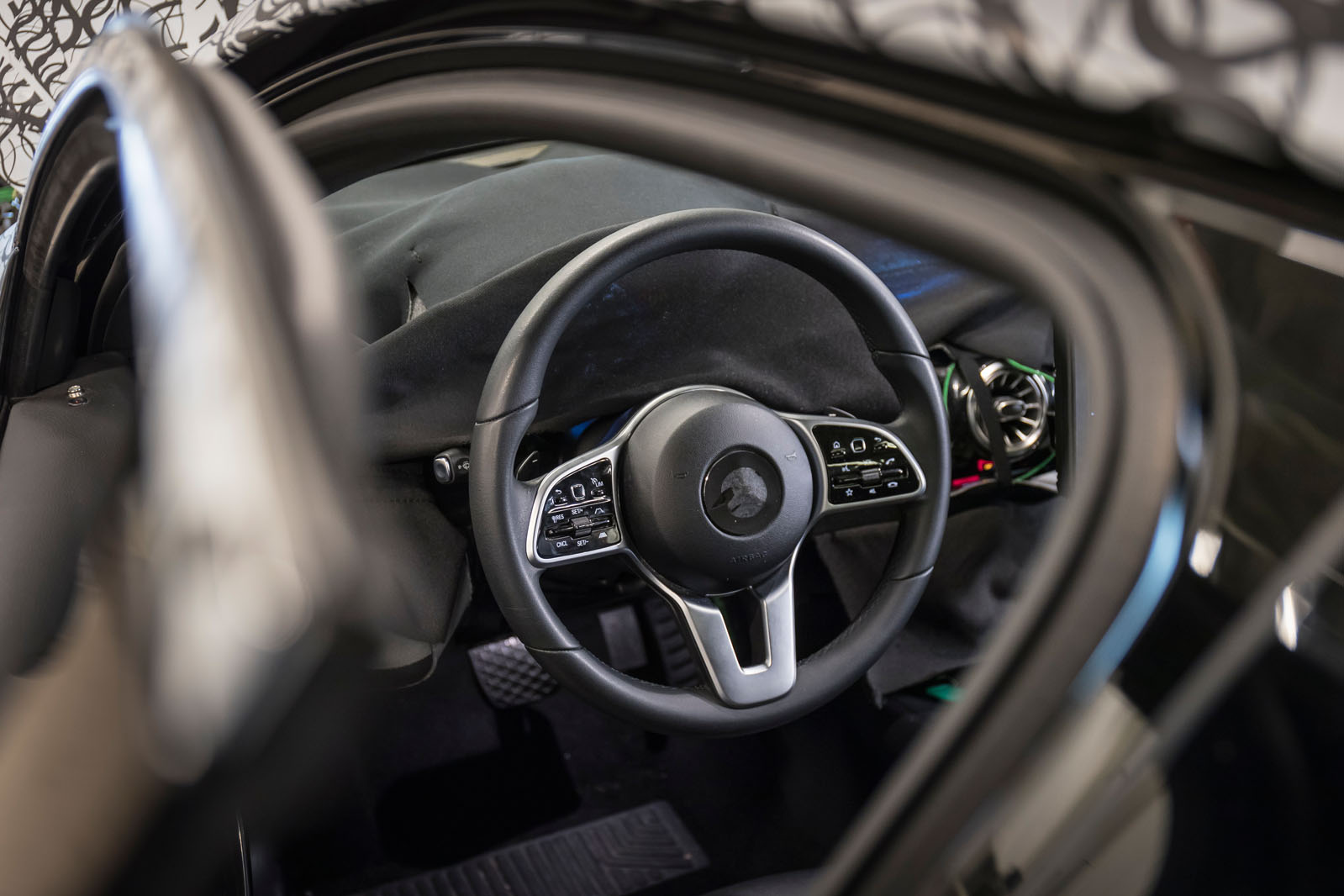 Eck, as nominated driver, said: “The predecessor model was good, but I think we’ve managed to move the game along. It is more grown up, you could say it now meets the expectations of a Mercedes better than ever before.”

By next April we should be able to verify this for ourselves, but for now, it appears the new A-Class is ready to replicate the sales success of its predecessor.

"We knew we had to improve

"We knew we had to improve the ride" so they have fitted it with a torsion beam rear axle? Oh well guess it gives it one more thing in common with a Dacia Sandero. It is a far cry from the days of the W201.

"We knew we had to improve

"We knew we had to improve the ride" so they have fitted it with a torsion beam rear axle? Oh well guess it gives it one more thing in common with a Dacia Sandero. It is a far cry from the days of the W201.

Style over substance is exactly right

The current A class and it's derivatives are terrible in terms of build quality. Not fit to wear the Merc badge. Not fit to be even called German. But then so is my W205 C200. The crappiest quality I have ever seen in a car right up there with the 2002 VW Beetle.
View all comments (11)