BACK TO ALL NEWS
Currently reading: New Jeep Grand Wagoneer concept previews 2021 luxury SUV
UP NEXT
Tesla to expand select UK Superchargers to other electric vehicles

Jeep is reviving the storied Wagoneer nameplate for a new family of premium SUVs and has previewed the range-topping Grand Wagoneer with a bold new concept that blends modern styling cues with nods to the iconic original car.

The first Wagoneer – launched in 1962 - is widely recognised as an early pioneer of the premium SUV segment and Jeep said “its return allows us to expand to a much more premium arena with new levels of design detail and advanced safety and technology features”.

The firm claims the Grand Wagoneer concept was designed with a dual focus on modernity and authenticity and “encapsulates the future of the ultimate premium SUV”. When it is launched in 2021, the Grand Wagoneer will supersede the Grand Cherokee as Jeep’s flagship model and compete with more upmarket models, including the Range Rover and BMW X5. It's not currently destined for the UK or Europe, however.

The production car will be available with a choice of three four-wheel drive systems, independent front and rear suspension and Jeep’s Quadra-Lift air suspension, hinting that off-road capability remains a priority despite the luxury shift. 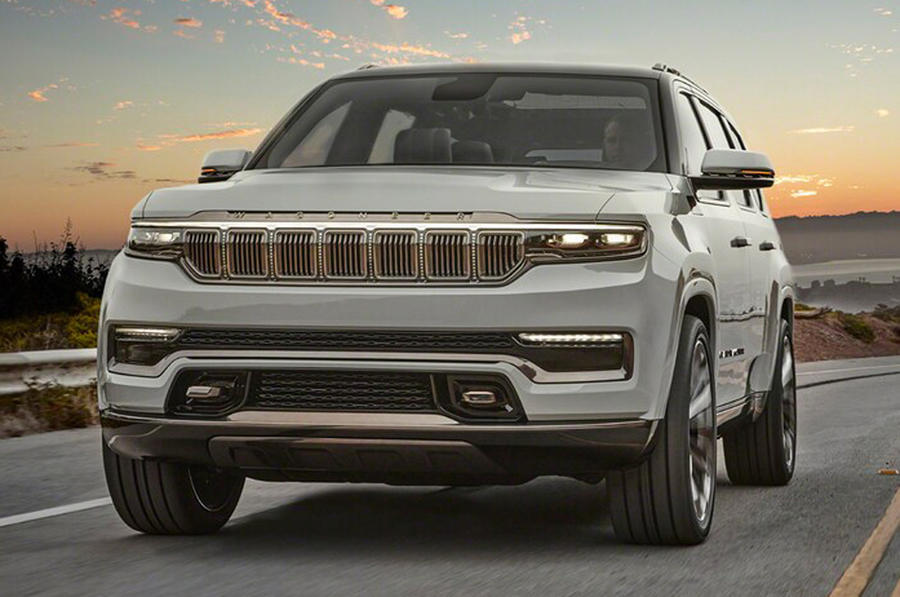 Although the production design is tipped to be toned down slightly, the concept gives a good idea of what to expect from the Grand Wagoneer.

Elements such as the modernised interpretation of Jeep’s trademark seven-vent front grille, for example, will probably be carried over wholesale. Although familiar from models such as the Wrangler, Renegade and Gladiator, the intake has been updated with black trim accents and latticework inserts and is framed by a new LED signature light design, which is said to emphasise the car’s width.

The concept also features LED projector headlights surrounded by genuine teak wood - a detail unlikely to make its way to production - in reference to the original Wagoneer’s wooden side panelling. Prevalent front tow hooks and a chunky black aluminium skid plate hint at its off-road capability.

The Grand Wagoneer concept features trapezoidal wheel arches like Jeep’s production cars but has 24in aluminium wheels, which - as is often the way with concept cars - will be downsized for showrooms. The copper-finished badges on the doors, bearing a new font designed specifically for the concept, will likely make production, though. 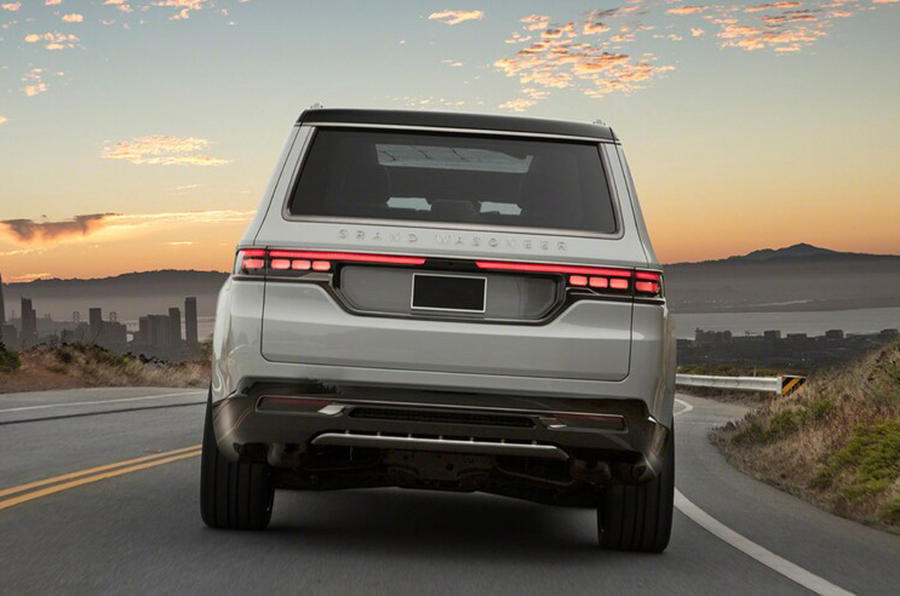 The Grand Wagoneer’s interior will offer a seven-seat layout for the first time in the model’s history and marks a radical shift away from the firm’s customarily utilitarian cabin design language.

Large windows, together with the full-length glass roof, offer comprehensive all-round visibility. Glass has also been used throughout the cabin itself as it’s a “sustainable, fully recyclable material that provides environmental benefits and is made of an abundant natural raw material”, according to Jeep.

A black glass trim element runs the width of the concept’s dashboard and aluminium has been used for the dashboard support, speaker surrounds and gearstick. In a further nod to the model’s heritage, wood inlays feature on the instrument display and door panels.

Additional sustainable materials used on the concept include Dinamica microfibre suede for the headliner, recycled ‘Thrive’ carpets and ‘PUR’ synthetic upholstery on the seats, doors, console and instrument panel. 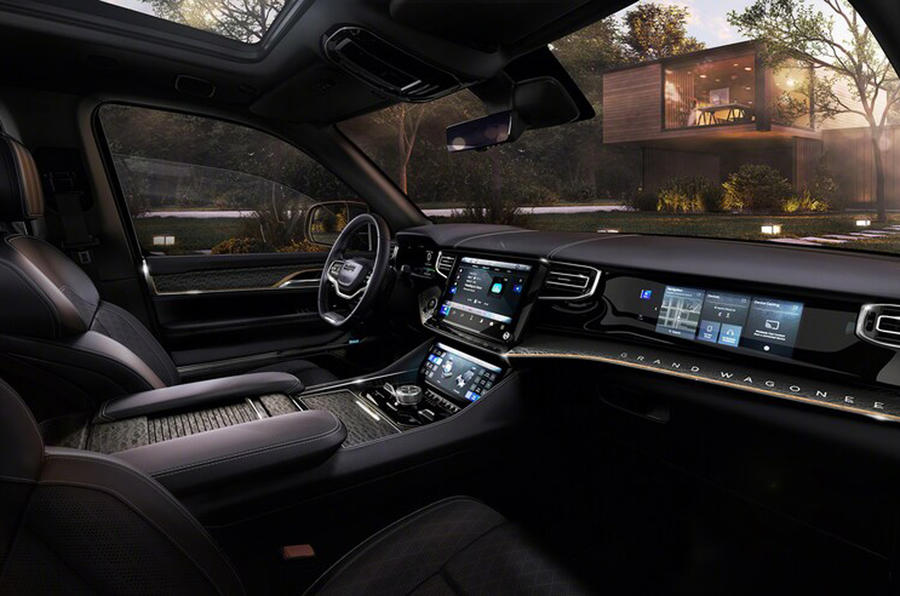 The instrument panel itself is dominated by four large digital displays spanning a total of 45in: a 12.3in digital instrument display, a 12.1in central infotainment touchscreen, a 10.25in climate control touchscreen panel and a 10.25in touchscreen mounted directly in front of the passenger seat.

The second-row passengers also each get their own 10.1in infotainment touchscreen, with access to another 10.25in climate control touchscreen. The car’s infotainment system runs on Fiat Chrysler Automobiles’ latest-generation, Android-based Uconnect 5 software, which is claimed to run five times faster than that used by current production cars.

The concept’s 23-speaker, 24-channel audio system was developed by home audio brand McIntosh - making its automotive debut here - and is finished in the same aluminium and gloss black design as its existing products.

Christian Meunier, global president of the Jeep brand, said: "With the electrification of each Jeep nameplate coming in the next few years, and the reintroduction of Wagoneer, we are quickly expanding into new segments and more premium space. “Wagoneer is unquestionably rooted in the legendary Jeep brand and its unmatched heritage of leading capability, authenticity and freedom, and its return allows us to expand to a much more premium arena with new levels of design detail, and advanced safety and technology features."

He added: “The new Grand Wagoneer Concept is our vision of what a modern expression of this timeless icon can be, and hints at how we will redefine and recreate the benchmark premium SUV.”

I realize this is a concept,

I realize this is a concept, but aren't they supposed to be futuristic?  This looks dated, especially the windows.

Can't put my finger on it but..

..just doesn't shout premium to me. Lot of Discovery 5 in the arse shot to me..

I agree Pietro, never yet been in a Jeep product that reminded me of luxury. More like a Ford but with Fiat build quality. Here in the USA the brand spokesperson was eager to announce top spec ones will cost $100k! Now that made me laugh.

McIntosh have done in car

McIntosh have done in car audio before. It was an option on certain Japanese market Subarus, for example.