BACK TO ALL NEWS
Currently reading: New BMW X7 Dark Shadow edition is ultra-exclusive special
UP NEXT
Entry-level SUVs on the way from Volvo and Polestar

Only 500 examples of this special-edition luxury SUV will be built, with 10 heading to the UK
Open gallery
Close
Share story

BMW has revealed the X7 Dark Shadow Edition, a limited-run version of its luxury SUV that's set to arrive later this year.

Just 500 Dark Shadow Edition cars will be built worldwide, with only 10 earmarked for British customers. The exclusivity sets the X7 derivative apart from lesser xDrive40i and xDrive40d models, as well as its main rivals, including the Mercedes-Benz GLS and Audi SQ8.

Based on the top-spec X7 M50i, Dark Shadow Edition cars use the same twin-turbo 4.4-litre V8 petrol engine, which produces 523bhp and 553lb ft, and is paired with an eight-speed automatic gearbox. BMW claims the X7 can get from 0-62mph in 4.5sec and can reach a governed top speed of 155mph. An electronic M Sport differential and rear-biased xDrive four-wheel drive system can send up to 100% of drive to the rear wheels.

Each car will be finished in Frozen Arctic Grey metallic - a colour not previously seen on any BMW SUV model - with M Sport bodywork additions including gloss black tailpipes, kidney grille and roof rails. An M Sport exhaust and 22in matt black alloy wheels are standard. 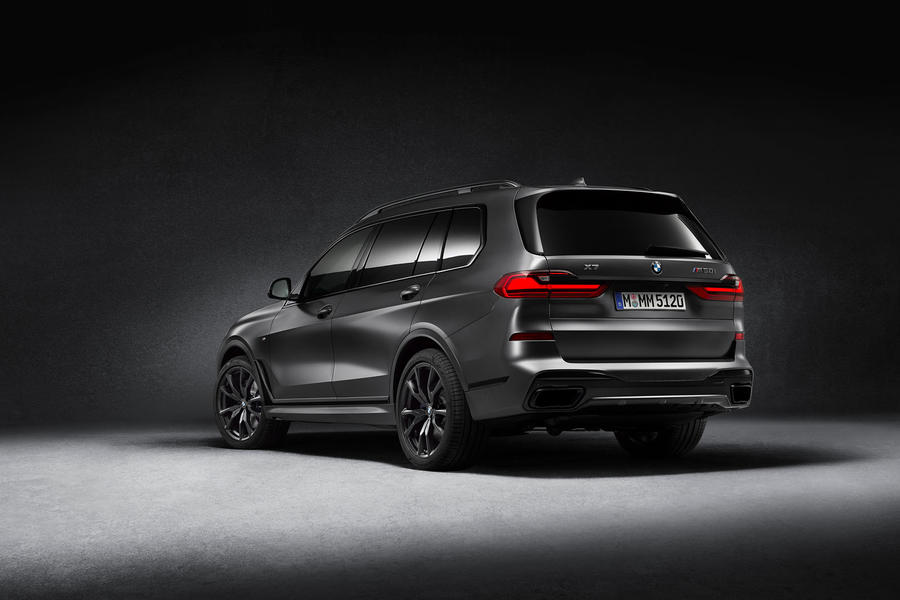 Order books are open from today, with UK prices starting from £114,975. With a full-fat X7 M yet to be confirmed, this makes the Dark Shadow Edition the most expensive X7 variant available. It costs more than the GLS 400d, currently the only version of Mercedes' seven-seat luxury SUV on sale in the UK, but considerably less than the entry-level Bentley Bentayga.

Production will begin at BMW's Spartanburg plant in South Carolina, US, in August, alongside the rest of the X7 range, with deliveries expected towards the end of the year.

Something to run Merkel to

Something to run Merkel to the hairdressers in.

Does the dimensions of this BMW match or exceed those of its American equivalents? I'm guessing it does, so should do rather well abroad.