The BMW X2 line-up has been extended with a four-wheel-drive xDrive25e plug-in hybrid model, just four months before BMW 's sporting crossover is due to receive a mid-life facelift.

The X2 xDrive25e will rival the all-new Mercedes-Benz GLA 250e when it goes on sale here in July and adopts what BMW describes as a fourth-generation petrol-electric plug-in hybrid powertrain.

The same system is used by the BMW X1 xDrive25e and BMW 225xe Active Tourer. It employs a transversely mounted turbocharged 1.5-litre three-cylinder petrol engine producing 123bhp and 162lb ft of torque together with an electric motor located within the rear axle and developing 94bhp and 122lb ft.

The two power sources provide the X2 xDrive25e with a combined system output of 217bhp and 284lb ft of torque. Drive from the petrol engine is sent to the front wheels via a six-speed torque-converter automatic gearbox, while the electric motor channels its energy to the rear wheels via a fixed-ratio gearbox.

BMW claims a 0-62mph time of 6.8sec and a top speed in Hybrid mode of 121mph. In combination with a 10kWh lithium ion battery mounted in the boot floor, BMW’s petrol-electric powertrain provides the X2 xDrive25e with an electric-only range of up to 33 miles on the WLTP test cycle. 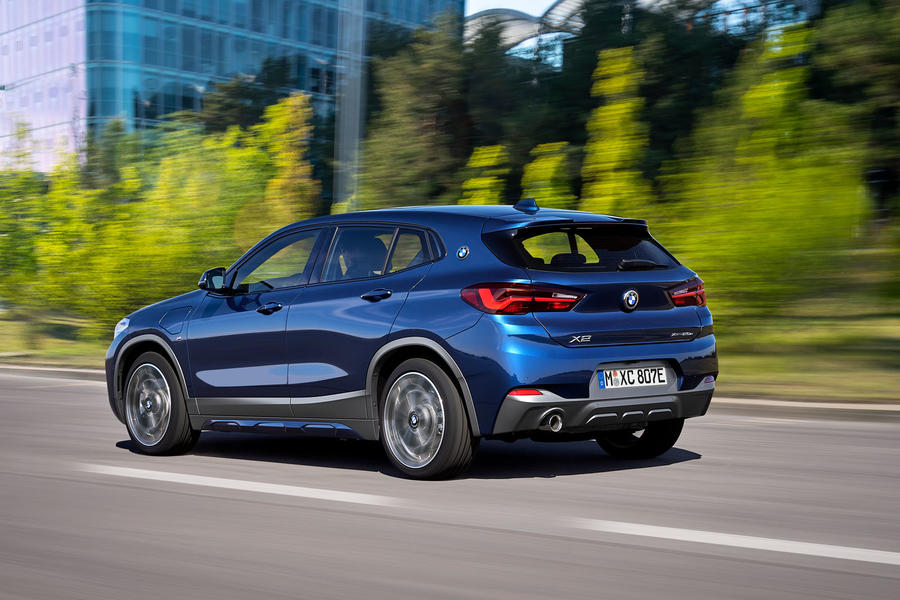 The new X2 model can be told apart from its petrol and diesel siblings by a redesigned front bumper. It forgoes the round foglights featured on other X2 models in favour of units integrated into the main headlight assembly – an arrangement that is expected to be reflected in the facelifted BMW X2 that’s due out in September.

Inside, there are new readouts within the Infotainment system that provide details of energy flow, current and range. Model-specific equipment for the X2 xDrive25e includes an acoustic pedestrian warning system, uniquely styled 17in alloy wheels and dual-zone air conditioning that can be controlled remotely via a smartphone.

To answer the question posed by typos1 - it is coming. It needs to be re-engineered for longitudinal drive trains as opposed to transverse drive trains but expect to see a 325e and 525e in the next year or two. Both would prove popular with company car drivers and would almost certainly spell the end of the 320d and 520d given the massive financial advantages of hybrid cars.

Why havent they put this

Why havent they put this drivetrain inlower spec 3s and 5s