The latest Audi Audi Q5 model will be complemented with a Sportback model that's expected to be revealed later this year - and new spy shots give us an almost unimpeded look at the rakish Audi SUV’s design.

A thinly disguised Audi Q5 Sportback mule has been spotted going through its paces at the Nürburgring, revealing a lower, more coupé-like roofline and sportier profile than the Facelifted standard Q5, as well as a unique tailgate and rear bumper design. It follows on from last year’s launch of the Q3 Sportback as a rebodied version of the standard Audi Q3.

Underneath, the Sportback will be mechanically the same as the recently facelifted Audi Q5, gaining mild-hybrid tech and new infotainment. 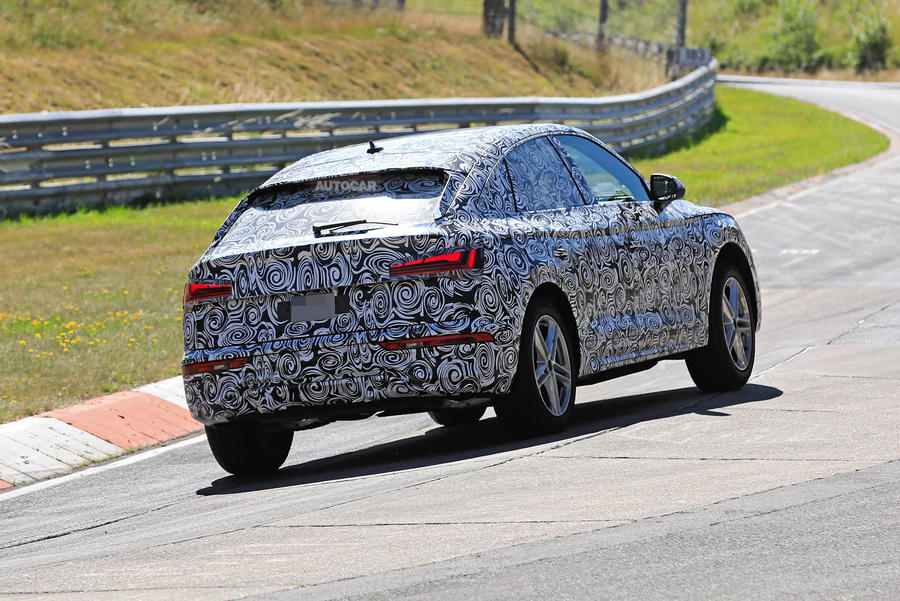 The launch engine will be equipped with a belt-integrated starter/generator for 12V mild-hybrid functionality, which allows for engine-off coasting.

It will also be able to activate the engine start/stop function below 13.7mph and sport the standard Q5’s twin-dosing selective catalytic reduction (SCR) set-up, which reduces NOx emissions. In all, these features should allow the Sportback to match the Q5’s 43.6-44.4mpg WLTP cycle economy figures. Expect performance to match the standard SUV's, too.

As the Nürburgring shots suggest, Audi is expected to offer the Q5 sportback with a bespoke chassis tune. It shouldn’t be dramatically different from the standard model, but expect stiffer spring and damper rates in keeping with the sportier look.

Inside, the Q5 Sportback will benefit from a new free-standing central 10.0in touchscreen infotainment system, although rear head space is likely to be less than in the standard Q5 because of the Sportback’s lower roofline.

Expect the Sportback to command a modest premium over the likely £44,200 asking price for the regular SUV.

No wonder I'm the only one to post... Nothing.