BACK TO ALL NEWS
Currently reading: New 2022 Tesla Model Y: meeting the SUV's first UK buyers
UP NEXT
Spending 48 hours touring in a Ferrari Roma

The new Tesla Model Y has arrived in the UK two years after its initial US launch, and customers have taken delivery of the electric SUV at select locations around the country.

The final and largest mass handover event took place at the Horizon cruise terminal in Southampton, the UK’s second most active automotive port, which processes more than 900,000 vehicles a year.

Handover events took place at a total seven locations across the UK, including Aerospace Bristol, the American Air Museum in Cambridge, the Imperial War Museum in Manchester, the Lochfyne Osyter Bar in Scotland, the Culloden Estate and Spa in Northern Ireland and the Oyster Catcher in Anglesey.

Customers were presented with a display showcasing Tesla's model range, the Model X’s light show and a host of other legacy models, including the Tesla Pride car, before being handed the keys to their own Model Y.

One customer told Autocar that Tesla’s technology and futureproofing were key to cementing their decision to purchase the model over other options in the compact crossover market, such as the Kia EV6 and Ford Mustang Mach-E GT.

“It’s the only brand that has made the effort for the future. Everyone else has written it off. Tesla has kept to its mission statement and followed it through,” said Jayesh Kanbi, who collected a Model Y.

“It’s also the incremental improvements, because all of the other car manufacturers give you the bare minimum and label it a new model, whereas I think Tesla’s the only one to continue to give you whatever they can give you as soon as the tech is there.” 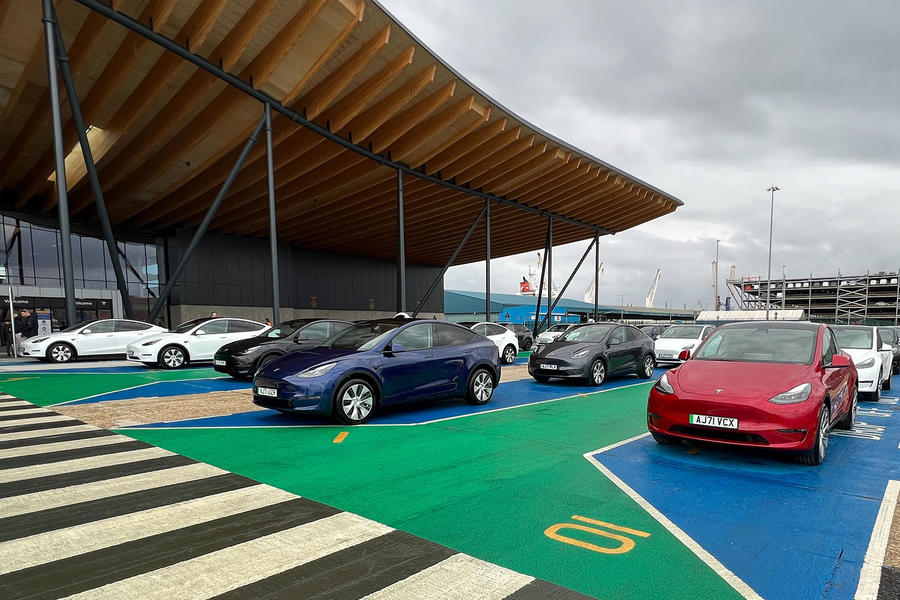 “The charging network was a massive draw. I think that’s one of the biggest draws really. I will be frustrated if they open it up to all EVs,” said another owner, who asked not to be named.

Tesla’s smaller SUV, and potentially its biggest seller, finally arrives in the UK

“I think performance is one of my favourite things about the car. Not looks; I think it could look a bit better if I’m honest,” they continued. “It’s not the most attractive car in the world, but I think the interior and how clean the design is impressive. Quality? I don’t know. It will be interesting to see what that’s like two years in.”

For others, the Model Y’s official 331 miles of range sealed the deal suggesting the model was the only viable option.

“Rather than me being a massive Tesla fanboy, it was the most viable option. Range is important to me, and to be fair, six months ago, a lot of the viable options for EVs didn't really exist for families, whereas now they do,” said Toby Pentecost.

“My most common work trip is between London and Bristol - exactly a 200-mile round trip, and you’ve got around 330 miles of range. We have on-street charging in London, so I think a relatively small portion of my charging will be using the Supercharger network, but I’m not sure yet.”

Tesla started production of the Model Y back in 2020 for customers in the US, while deliveries in mainland Europe began in August last year.

Essentially a crossover version of the Model 3 saloon, the Model Y completes the core Tesla model line-up alongside the Model S, Model 3 and Model X.

Fair Play AutoCar !!! It would have been easier to follow the narrative of traditional auto, advertisers, and journalists who are so committed to petrol and gear changing that they close their eyes to what everyone else can clearly see.  I get that traditional auto have massive sunken assets in making engines etc. and can also see the Nokia like trends towards better and increasingly affordable electric. (Check lease and total costs of ownership). But they are seriously dragging their feet - promising new electric models out front, whilst desperately trying to sell their old tech out back. I get that like Steve Jobs, before him, Musk is a controversial nerd, and has done some very odd things  (Tunnels, Twitter and Taquela ;-) ) but also rockets, robots Ai, and errr a few disruptive cars !!!

So Autocar, keep objective, don't be swayed by advertisers, foreign trips, or people, testers even who hate change. Don't slice off 1 star for being electric (and another for being Tesla :-) ). And like we got over horses and steam engines get over engine noises, and their necessary gear changes. Tom, Windsor, Uk

You would have to be one sad sack to attend.