The Ferrari 296 GTS is an open-top version of the firm's new mid-engined hybrid supercar, rivalling the McLaren 720S Spider with 819bhp and "class-leading levels of driver engagement".

The new convertible is one of two new Maranello models that will be revealed this year, with the highly anticipated Ferrari Purosangue SUV due in the coming months to complete the line-up.

Ferrari has shown it off in the metal for the first time at a special preview event at the Le Mans 24 Hours, where it has anounced its return to the race in 2023 with a new prototype hypercar racer.

In keeping with Ferrari tradition, the differences between the hardtop Ferrari 296 GTB and its convertible sibling are minimal, and limited chiefly to subtle styling revisions to accommodate the opening roof.

So the two cars have nearly identical silhouettes, but the retractable hard top – a similar set-up to that used by the Ferrari SF90 Spider – is stowed in a new bay inside the engine compartment, behind the seats.

"The roof takes space, so where would we put the battery?" he said. "We put it more or less in the same position as in the coupé, under the rear bench, but with this car, we further optimised the battery so we still had the rear bench for luggage space. This is very important."

The 296's rear deck has been reworked with resculptured buttresses and a more prominent step between the roof and the distinctive 'aero bridge' that spans the width of the car. There is also a new window at the bottom of the engine cover, and the rear screen is adjustable to ensure cabin comfort at high speeds with the roof down. 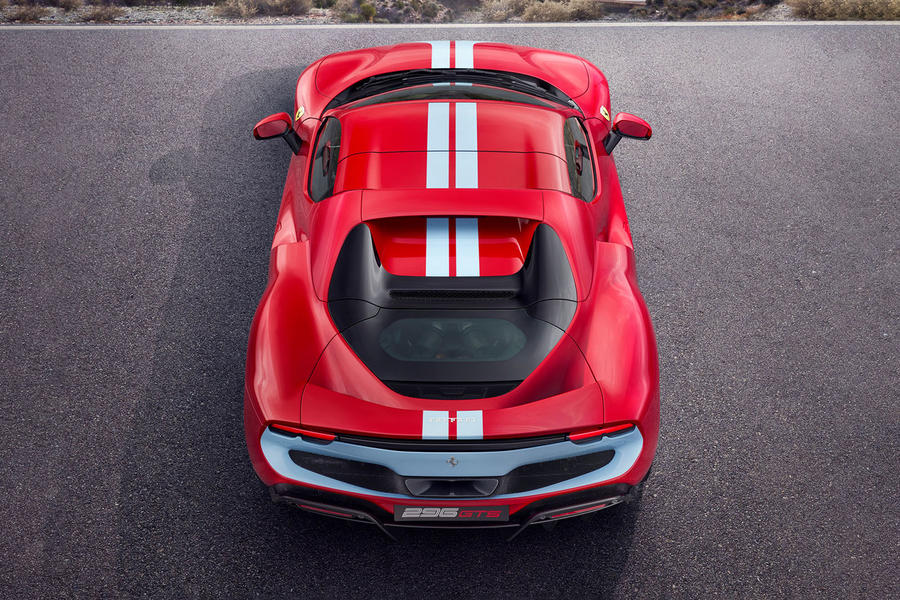 The overall effect of the subtle makeover gives "an extremely compact cabin effortlessly integrated with the wings and flanks".

Aerodynamic efficiency and downforce are on a par, too - with Ferrari engineers taking care to ensure the airflow impact of the wing and buttresses is replicated - and there is still an active rear spoiler stowed in the tail, which increases downforce at speed.

The roof itself takes just 14 seconds to open or close at speeds of up to 28mph, splitting into two sections that fold over the front of the engine – "thus maintaining the engine bay's thermal dissipation characteristics and the balance of the overall design".

The GTB's powertrain is carried over wholesale, with the 654bhp 3.0-litre twin-turbocharged V6 paired with a Yasa-sourced, rear-mounted, 164bhp electric motor sandwiched between the engine and the gearbox to take the total outputs to 819bhp and 546lb ft.

That means the 296 GTS gets from 0-62mph in 2.9sec and tops out at more than 205mph – figures that match the hardtop car, despite the convertible weighing 70kg more than the coupé, at 1540kg dry. While it can travel 205mph with the roof down, Turconi said that noise and comfort would diminish somewhat due to the wind above 112mph. It can travel up to 16 miles on electric power only.

Dynamically, the two are very closely related on both road and track driving. Turconi said that it was only really near the "very limit" on the track that the two diverged in their handling and reponses, where the extra weight and stiffness of the GTS would evetually tell.

As with the coupé, the GTS can be specified with the more track-oriented Assetto Fiorano package – named after Ferrari's Maranello test track – which brings Multimatic adjustable shock absorbers, carbonfibre aero and trim elements and various weight-saving measures, along with high-performance Michelin Pilot Sport Cup 2 R tyres.

Turconi said that the package was more than just a series of upgrades, but also opened up bespoke other options to buyers, including paint colours, wheel designs, and liveries.

The GTS name was chosen over Spider in reference to the 308 GTS of the 1970s. Turconi said that in profile, the 296 GTS had more of a Targa profile than a traditional Spider one.

No pricing information has yet been revealed, but the GTS has been priced at €320,000 (£273,000) in Europe. Expect this to be higher in the UK when it arrives in 2023 due to the extra standard specification UK cars will be offered with.

Red please with the two stripes and a dark interior, if, if I could afford it, it's one of the better looking Ferrari in the last few years.

I'll have mine without the ugly two colour option but with the silver wheels please.