BACK TO ALL NEWS
Currently reading: Modified Toyota C-HR primed to beat FWD Nurburgring lap record
UP NEXT
From supercars to SUVs: Maserati's do-or-die revival plan

The builder of a race-spec Toyota C-HR unveiled at this year’s SEMA Show in Las Vegas – a car that Toyota had claimed to be the world’s quickest SUV – believes it could set a new front-wheel-drive lap record at the Nürburgring Nordschleife.

The C-HR R-Tuned, built by Californian concept vehicle specialist Dan Gardner Spec, was commissioned by Toyota to showcase the sporting potential of the SUV. While it retains the front-wheel-drive layout of the road car, albeit with a new limited-slip differential, it features a 2.4-litre Toyota 2AZ-FE engine with a DG-Spec Garrett turbo, which combine to produce 591bhp. That power is controlled through a new Toyota E-Series five-speed manual 'box. 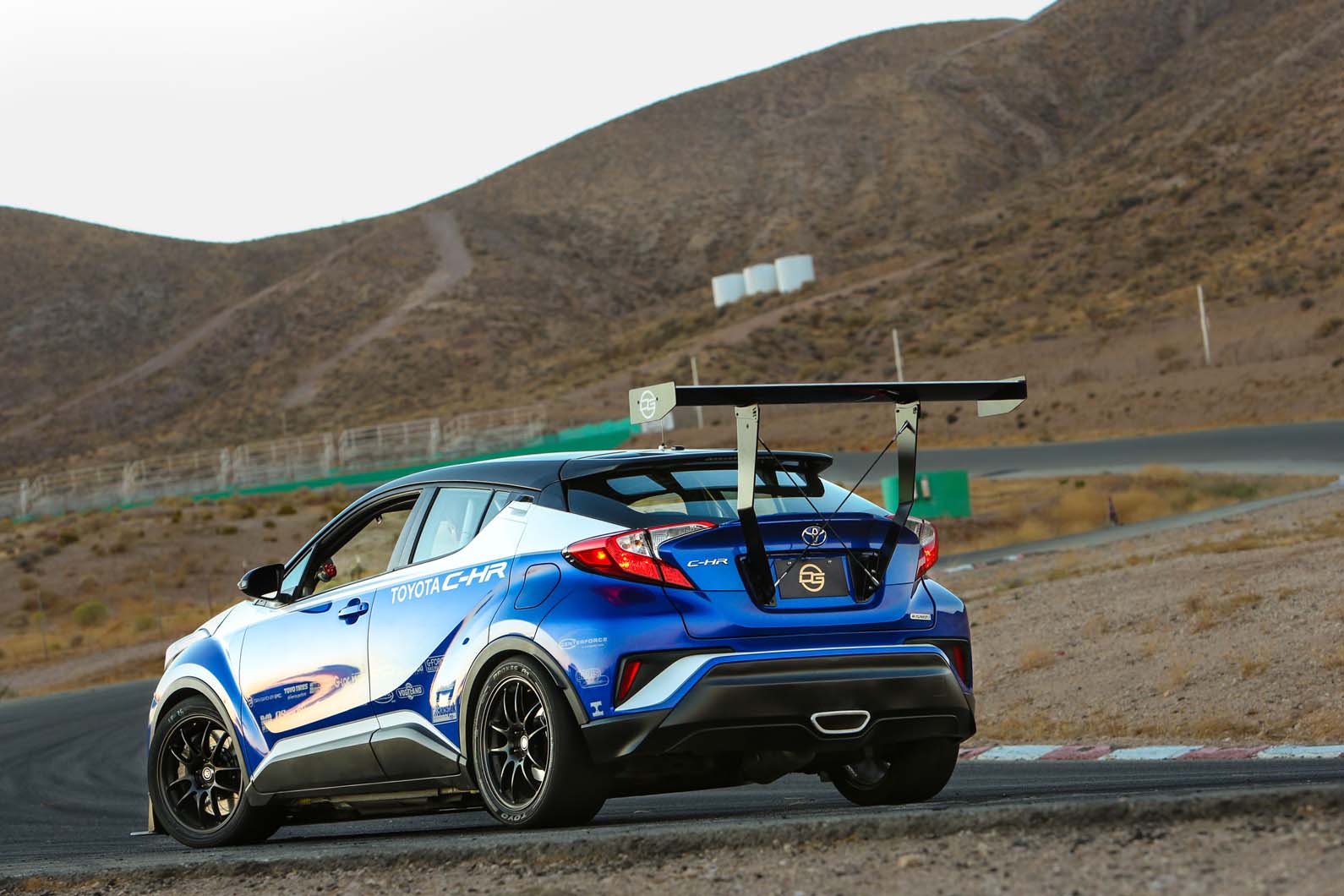 The C-HR R-Tuned also features custom Brembo brakes and an adjustable front splitter and rear wing, together producing around 300lbs of downforce.

The car lapped the 2.5-mile Willow Springs course in California in 1min 25.22sec, the first-fastest time set at the track, according to records – ahead of a Porsche 911 GT3 and McLaren 650 S Spyder.

Dan Gardner told Autocar that, although the brief from Toyota was to create a concept to display at SEMA, he wanted the machine to prove its performance credentials. 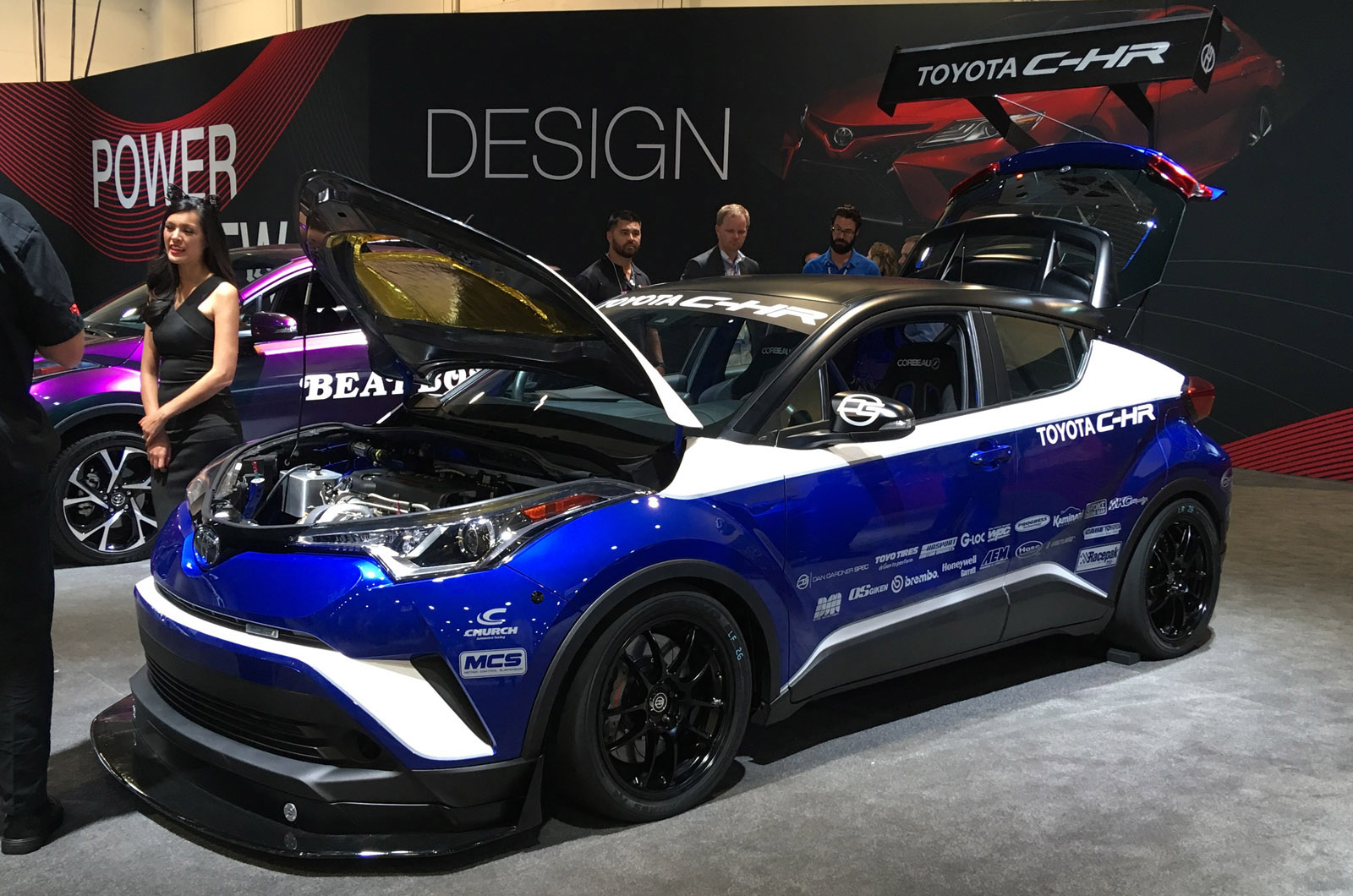 “The Toyota NGA platform the C-HR is built on is really stiff, so we worked on developing the handling characteristics,” he said. “We wanted to make a supercar killer - the whole point is that it doesn’t make sense.”

Gardner's firm started the build late last year and he estimated that it took a total of around 10,000 hours. Although there are no plans for the C-HR R-Tuned after SEMA, Gardner said he would love to take the car to the Nordschleife for a lap record bid there. “The car was built for SEMA and Toyota has no plans for it from now on. But it’s the real deal. Personally, it would be a dream to take it to the Nordschleife. I have no doubt it could set the front-wheel-drive record there.”

450 kW through the front hoops

As the C-HR is standard in

As the C-HR is standard in front-wheel drive (4WD being extra) it isn't an SUV.

A sport utility vehicle or suburban utility vehicle (SUV) is a vehicle classified as a light truck, but operated as a family vehicle. SUVs are similar to a large station wagon or estate car, though typically featuring tall interior packaging, high H-point seating, high center of gravity, high ground-clearance and especially four- or all-wheel-drive capability for on- or off-road ability. Some SUVs include the towing capacity of a pick-up truck with the passenger-carrying space of a minivan or large sedan.

A rugged automotive vehicle similar to a station wagon but built on a light-truck chassis.

A large vehicle that is designed to be used on rough surfaces but that is often used on city roads or highways.

Journalists: PLEASE stop using the term when it is inappropriate to the vehicle - the worst being the Tesla.