BACK TO ALL NEWS
Currently reading: Mini Recharged project to electrify brand's classic models
UP NEXT
2025 Volkswagen ID 1 is Spanish-built, £17,000 entry EV

Mini has launched a new in-house programme dedicated to electrifying its older models as the latest step in a wide-reaching campaign to promote the car maker’s sustainability credentials.

The new Mini Recharged project – developed by a team of workers at the firm’s Oxford factory, following a positive reaction to the one-off electrified Mini shown in 2018 – has been devised as a means of “telling the story of the classic Mini in the 21st century, in a sustainable way”. According to the brand, the concept was conceived even before the launch of the series-production Mini Electric hatch.

Owners of the original-shape Mini – produced under various nameplates from 1959 until 2000 – will eventually be able to have their car’s four-cylinder A-series engine swapped for a 121bhp electric motor. That will enable the car to cover 0-62mph in around 9.0sec – far quicker than any of the original engines offered. The four-speed manual gearbox makes way for a single-speed item.

Power is stored in a battery of undisclosed capacity. It is charged via a new port under the original filler cap at speeds of up to 6.6kW and is capable of a claimed 99 miles of range. The remaining battery capacity is displayed in a new dial as part of a reimagined version of the original gauge cluster. 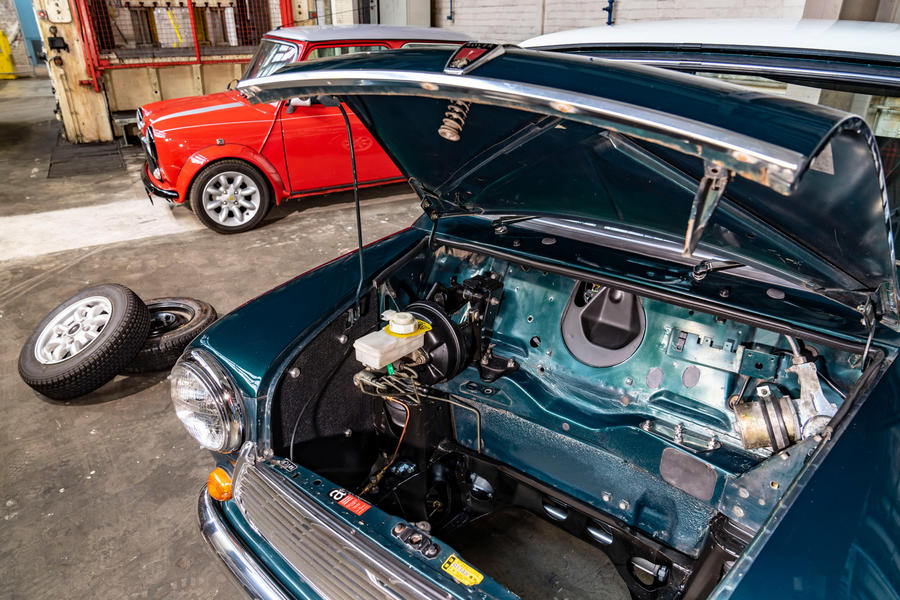 The conversion does not require the car to be re-registered and can be reversed at a later stage with the reinstallation of the original motor, which is marked and stored rather than being disposed of.

Mini says the new Recharged project “fits seamlessly into the brand’s future strategy, which also includes the aspect of circular economy”, noting that it will put new electric cars on the road without building them from the ground up.

Mini boss Bernd Körber, who is leaving the firm in February to head product management at BMW, said the project “preserves the character of the classic Mini and enables its fans to enjoy all-electric performance” and Mini is “connecting the past with the future of the brand”.

No price for the Recharged conversion has been announced but, for reference, Swindon Powertrain’s EV conversion kit for the original Mini, which includes a 107bhp motor and can be equipped with a 12kW battery, costs £10,620 including VAT.

Log in or register to post comments
Get Carter 25 January 2022
"That will enable the car to cover 0-62mph in around 9.0sec – far quicker than any of the original engines offered. "

A 1999 Rover Mini Cooper 1.3i Works S could do 0-60mph in 8.9 seconds. There are also a few other versions that aren't far off this figure. So it isn't quite the 'upgrade' performance wise Felix would like you to believe.

fenixuk 20 February 2022
I doubt any 23 year old mini still has that performance. And 0-60 is only important to pub bores and kids playing Top Trumps.
xxxx 25 January 2022

Seems pointless to me as that was what I thought a classic was, original in as many ways as practical, why not just put a modern 3 pot 1.0 Ford engine in it. Also that kit with a 12kw battery, the range would be be 50 miles at best.

I'd quite like an electric mg metro but that would be off brand.