BACK TO ALL NEWS
Currently reading: Mercedes-Benz X-Class 'is more than a reskinned Nissan Navara'
UP NEXT
2020 Jaguar E-Pace: major update brings new platform, PHEV option

Mercedes’ new X-Class double cab pick-up has been reworked dynamically as well as visually, according to the company’s commercial vehicle boss Volker Mornhinweg.

Revealed last week in concept form, the X-Class retains the ladder-frame chassis, five-link live rear axle and McPherson strut front suspension layout of the Nissan Navara, but Mornhinweg says of the chassis: "We knew what had to be done. A hell of a lot of work, but we learned from our SUV experience." He added that you can "hardly feel the difference between off-road and on-road. I wanted a precise line through corners, and it has crisp handling - you can feel what the car is doing."

Contributing to this improved road behavior is a wider track compared than the Navara's, which increases stability and grip while reducing body roll. Lead engineer Klaus Benzinger says that Mercedes gave up using its original set of benchmark comparators because their dynamics were no longer relevant to the X-Class, such has been the progress made with it.

Refinement has also been a priority; this is not usually an area of excellence for pick-ups. Morninhinwg added that "a lot of work" had gone into this area.

The X-Class will go on sale in the UK towards the end of next year, and will be available only from Mercedes’ commercial vehicle network. It will be offered in two and four-wheel drive forms with four and six-cylinder petrol and diesel engines, and with a wide range of Mercedes-engineered options and accessories. Britain will only be offered the diesel versions. 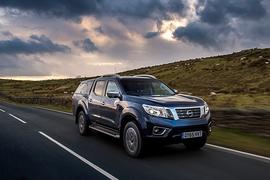 31 October 2016
I've never seen Autocar saying that Porsche is a re-skinned Skoda! Why do they feel the need to reveal the origins of the Mercedes' pickup truck? Let me go and figure!

I've never seen Autocar saying that Porsche is a re-skinned Skoda! Why do they feel the need to reveal the origins of the Mercedes' pickup truck? Let me go and figure!

Because there is no Porsche that is related to a Skoda, maybe? They've certainly compared the Macan to the Q5, and i'm pretty sure those two are more distinct from one another than this X class will end up being from a Navara.