BACK TO ALL NEWS
Currently reading: Mercedes-AMG A45 S: UK prices for mega-hatch revealed
UP NEXT
New Aston Martin DBR22 is £1.5m, V12 speedster

UK pricing for its 415bhp Mercedes-AMG A45 S 4Matic+ hatchback has been announced following its reveal at July's Goodwood Festival of Speed.

The Audi RS3 rival is available to order now in two trim levels, with prices starting at £50,570 for the hatchback and £52,145 for the larger Mercedes-AMG CLA 45 variant. Entry-level models come equipped with 19in five-spoke alloy wheels, red brake calipers, AMG suspension, a performance steering wheel, heated front seats and keyless entry as standard.

The company is claiming class-leading power, performance and features for the second-generation A45 S 4Matic+ – a car it says will challenge the established mega-hatch order with up to 415bhp, a supercar-baiting 0-62mph time of 3.9sec and a new switchable Drift mode function.

The A45 heads a quartet of rapid new compact Mercedes-AMG models equipped with the M139-designated four-cylinder petrol engine. 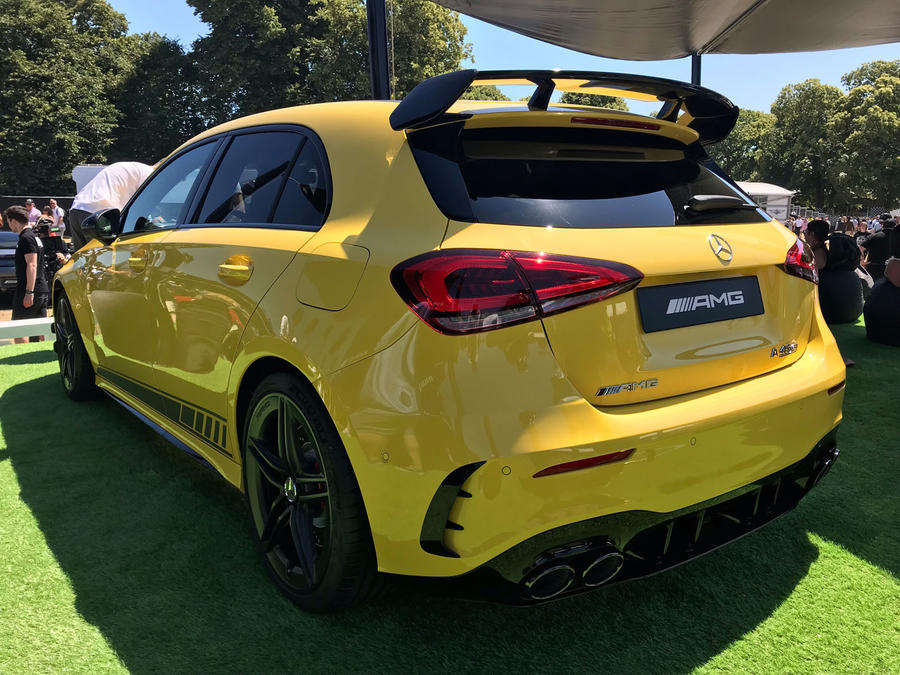 The turbocharged 2.0-litre unit uses many of the technical solutions already developed for Mercedes-AMG’s twin-turbocharged 4.0-litre V8 petrol engine and it will be offered in two distinct power outputs. In the new standard A45 4Matic+ and CLA45 4Matic+, the M139 develops 387bhp at 6500rpm and 354lb ft of torque between 4750rpm and 5000rpm. That’s 85bhp and 59lb ft more than the Mercedes-AMG A35 and CLA 35.

This marks the new AMG motor out as the world’s most powerful four-cylinder series-production engine. It also represents an increase of 39bhp and 18lb ft on the outgoing M133 engine of the previous A45.

Both new A45 4Matic+ models have the same combined cycle fuel consumption and CO2 emissions, at 34.0mpg and 189g/km. The new AMG engine comes mated to a standard eight-speed dual-clutch gearbox and a newly developed multi-plate clutch 4Matic+ four-wheel drive system. This features an AMG torque control function that separates electronically controlled clutches within the rear axle to vary the amount of drive sent to each individual rear wheel.

As a result, they can be configured to send the majority of drive to the rear wheels via a new Drift mode function, which is included in an optional AMG Dynamic Plus package, when the car’s stability control is deactivated and the gearbox is set to manual mode. Overall, the new driveline offers up to six driving modes: Comfort, Sport, Sport+, Slippery, Individual and Race – the last of which is standard in range-topping S models and optional as part of the AMG Dynamic Plus package in standard models. 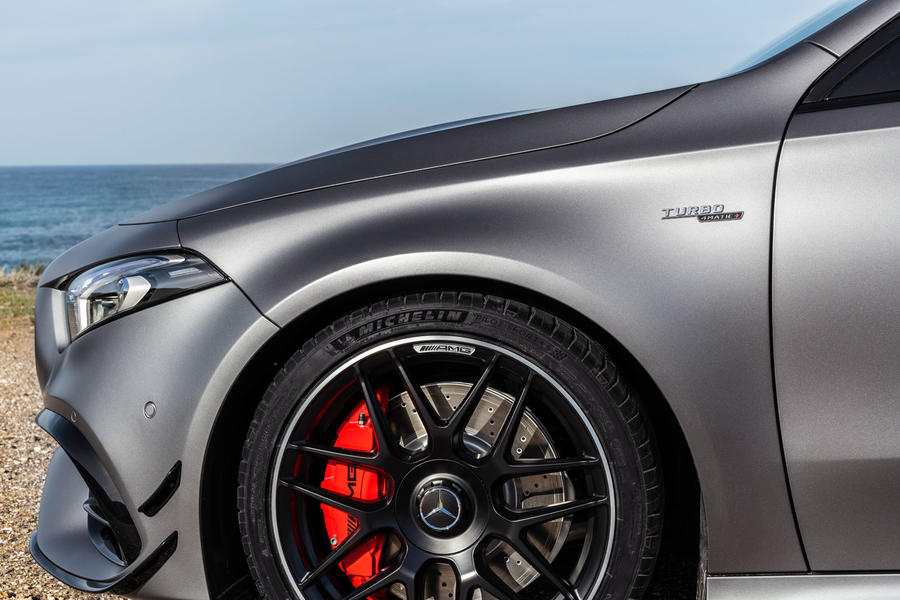 AMG has also introduced a re-engineered steering rack with a variable ratio and two different software maps depending on the driving mode. The steering rack itself is mounted on a new carrier, which is claimed to increase precision.

The suspension retains the same MacPherson strut front and four-link rear design as less powerful versions of the fourth-generation Mercedes-Benz A-Class and second-generation Mercedes-Benz CLA. However, the components, including a wider front track and bespoke front axle carrier, are described as being all new with unique geometry and reduced unsprung masses.

AMG Ride Control with adaptive damping is available as an option. The base A45 features 18in wheels, with the S version receiving 19s.

The suspension is supported by a stiffened bodyshell that features a new aluminium plate bolted underneath the engine, a strut brace between the front suspension towers and reinforcements within the lower part of the A-pillars – all of which, AMG claims, leads to “considerably reduced body torsion along the longitudinal and transverse axis”.

At the rear, there is a prominent tailgate-mounted spoiler and a unique bumper that houses two round tailpipes (82mm in diameter on the A45 4Matic+ and 90mm on the A45 S 4Matic+) as well as a twin-channel diffuser element.

Mercedes-AMG set to give all future models plug-in option​

I like the current design language of AMG. I would drive this.

Will the engine have any character though