BACK TO ALL NEWS
Currently reading: Maserati to return to GT racing with MC20 GT2
UP NEXT
Fisker goes radical with Pear EV SUV

Maserati to return to GT racing with MC20 GT2

A racing version of the Maserati MC20 supercar has been announced ahead of the 2023 Fanatec GT2 European Series, kitted out in an aggressive carbonfibre aero package.

Along with a host of other weight-reduction changes, the new bodywork means the Maserati MC20 GT2 could weigh around 1250kg to match the hardcore Maserati Project24 track car that was unveiled last week. This is 100kg lighter than the Audi R8 LMS GT2 and puts the MC20 GT2 on a par with the Brabham BT63 GT2 that was unveiled in 2021.

The MC20 GT2 retains the road-going car’s 621bhp 3.0-litre V6 engine, but is expected to have its power reduced in accordance with Balance of Performance rules. These limit engine power or add weight ballast – or both – to level the playing field, and the aforementioned Brabham’s 1250kg weight gives it up to 600bhp.

This provides a power-to-weight ratio of 480bhp per tonne, 66bhp per tonne better than the regular MC20. Combined with slick tyres and bigger, ventilated brakes, this means the MC20 GT2 should accelerate, stop and steer with more purpose than the already-sensational road car. 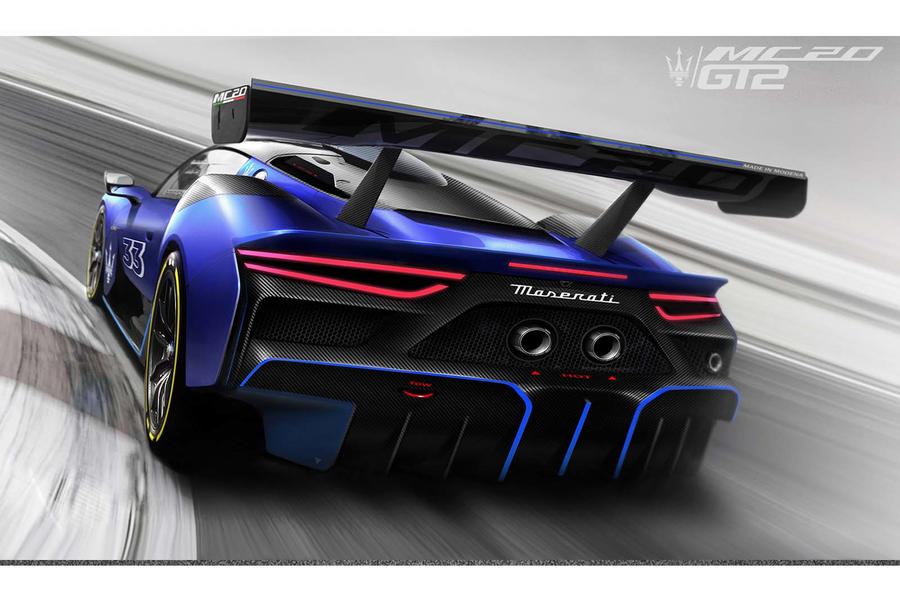 The MC20 GT2's interior is likely to mirror that of the Project24, with a racing-specific pedal box, roll-cage and steering column, plus a carbonfibre multifunction steering wheel. Many of the road-going car's features, including its touchscreen infotainment system, rounded steering wheel and chunky Alcantara-trimmed bucket seats, are therefore set to be omitted.

Maserati has not announced if the MC20 GT2 will go on public sale. If it did, it would command a premium over the standard model, which is priced from £190,275. A Brabham BT63 GT2, considered one of the more ‘affordable’ cars in its class, costs around £350,000 (excluding tax).

Maserati CEO Davide Grasso said “racing has always been Maserati's natural habitat”, adding “this brand is making a new start from its roots to build the future”.

The Italian manufacturer enjoyed great success in racing between 2005 and 2009, when the Maserati MC12 GT1 campaigned by Vitaphone Racing won five consecutive teams’ titles in the FIA GT1 Championship.