BACK TO ALL NEWS
Currently reading: Lucid Motors forges electric vehicle battery deal with Samsung SDI
UP NEXT
All-new entry-level McLaren to be 600bhp-plus V6 PHEV

The two companies claimed to have developed next-generation cylindrical cells that “are able to exceed current performance benchmarks in areas such as energy density, power, calendar life and safety”.

The cells are also said to respond more favourably to repeated fast charging than many of today’s battery packs.

Lucid’s director of battery technology, Albert Liu, said: “I have been very pleased with the results of the collaboration with Samsung SDI in developing a cell chemistry that meets our stringent standards.

“Samsung SDI combined their in-house chemistry expertise with massive real-world datasets and state-of-the-art battery models provided by Lucid to develop a cell that is both energy dense and resistant to damage associated with fast-charging.”

Lucid, a fast-developing Chinese-backed American company, intends to develop cars for use by ride-sharing services, which makes strong battery performance a prerequisite because the vehicles are likely to be in near-constant operation around the clock.

Last week Lucid announced that it will build its first production electric vehicle at a factory in Casa Grande, Arizona. A prototype version of the car is already on the road.

Samsung SDI supplies the batteries that power several established electric vehicles, including the BMW i3 and i8. 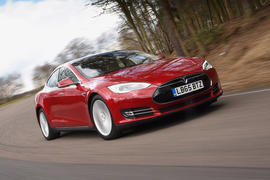