BACK TO ALL NEWS
Currently reading: Lucid Air: 1065bhp EV saloon enters production in Arizona
UP NEXT
Quarter of UK cars produced in April were electrified

UK-bound Tesla Model S rival, priced from around £40,000, has a range of more than 500 miles
Open gallery
Close

California-based EV start-up Lucid has begun production of its Air saloon, an electric performance saloon with up to 1065bhp and a claimed maximum range of more than 500 miles.

The first cars off the line are the top-spec, limited-run Dream Edition models, which will be with their customers at the end of October. Grand Touring, Touring, and Air Pure variants will follow, with Lucid claiming to have taken 13,000 reservations already.

The marque’s debut model is claimed to be “the most aerodynamic luxury car in the world”, with a drag co-efficient of just 0.21 - 0.01 less than the new Mercedes-Benz S-Class, for reference. With an (unrestricted) top speed of 235mph, it will be the fastest electric production car on sale.

Lucid said the Air can cover a quarter-mile sprint in as little as 9.9sec, making it the first electric saloon to break the 10-second barrier, and adds that it can achieve this feat on a “consistent, repeatable basis”.

The Air will be available in four trim levels to start with. The standard car, available from $52,100 (£40,040) including the US’s EV tax credit, uses a single electric motor to send 395bhp to the rear wheels and is capable of a claimed 240-mile range from a 75kWh battery pack supplied by Samsung. 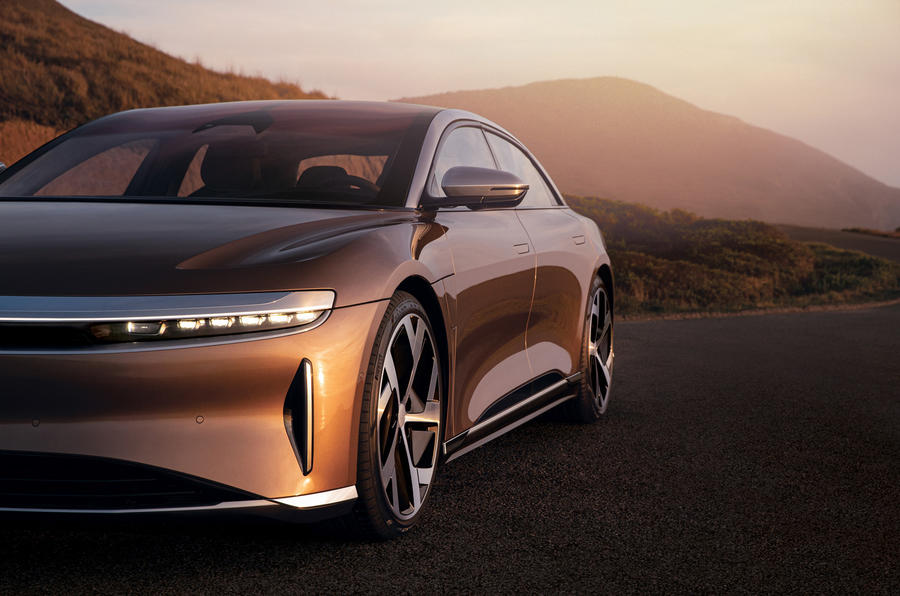 The full 1065bhp output is restricted to the $161,500 (£124,130), four-wheel-drive Dream Edition, which is capable of sprinting from 0-60mph in 2.5sec. It also brings a bespoke interior design trimmed in leather and eucalyptus wood, and a set of unique 21in wheels. Just 520 examples will be available – a nod to its 520-mile claimed range.

All variants are claimed to be capable of recuperating 300 miles of range in just 20 minutes at a DC fast charger, making the Air “the fastest-charging electric vehicle ever offered”, according to Lucid.

The Air has been brought to production largely unaltered from the futuristic prototype first displayed in 2016, and retains its distinctive wraparound front light bar, which uses a ‘micro lens array’ system comprising thousands of individual, digitally controlled ‘light channels’ to offer bright, precise and flexible illumination.

Aerodynamic efficiency is aided by the Air’s long, low silhouette, curved corners and short overhangs, while the cabin has been designed to offer a “light and airy feel”, with thin window pillars and a glass roof. Five seats feature as standard, but the rear bench can be swapped out for two ‘executive’-style chairs as an optional upgrade. 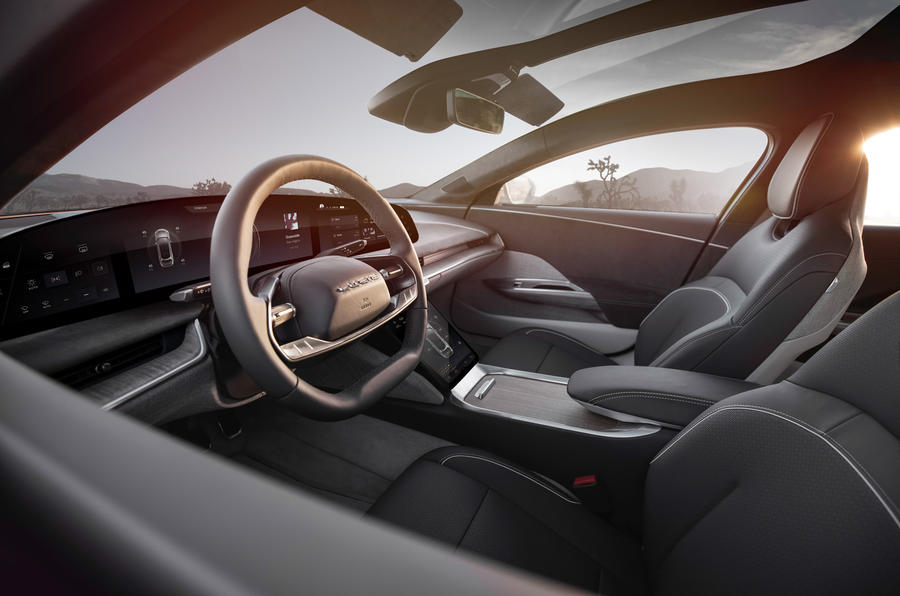 Designed with an emphasis on space, the interior is dominated by a 34in curved screen that appears to float above the dashboard and offers 5k display quality - far higher than a conventional infotainment system, and a retractable ‘pilot panel’ touchscreen sits within easy reach of the driver, giving control of certain systems and functions.

Not all controls are digital, however; physical buttons - said to be precision-milled - are used for the ribbed steering wheel functions and climate control, and Lucid has worked with Amazon to implement Alexa voice-recognition software, which can be used for navigation, phone calls, music streaming and smart home control.

The Air sits atop Lucid’s own Electric Advanced Platform (LEAP), which minimises incursion from the powertrain into the cabin, allowing for a larger cabin area. The architecture also forms the basis for the firm’s upcoming SUV model, expected to share most of the Air’s mechanical make-up. 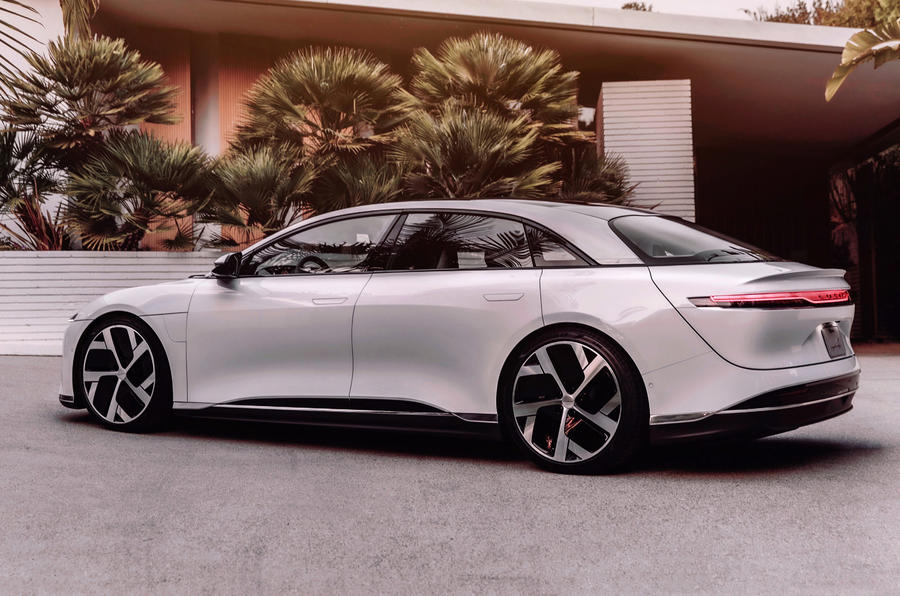 The Air is Lucid’s first foray into the production EV market. CEO Peter Rawlinson - who previously served as chief engineer of the Tesla Model S, the Air’s primary rival - hailed the new arrival as a “halo car for the entire industry, one which shows the advancements that are possible by pushing the boundaries of EV technology and performance to new levels”.

Derek Jenkins, vice-president of design at Lucid, said: “When we embarked on this journey at Lucid Motors and the development of our first vehicle, the Lucid Air, we refused to compromise. We decided early on that we were going to pursue every facet of performance, innovation, and luxury.

“The result is that we are building the best car in the world and the numbers simply speak for themselves.”

Launching initially in the US, the Air is also now available to order in selected European countries and the Middle East. A UK launch date remains unconfirmed, but it can now be reserved online for a £770 deposit.

Lucid will build the new car and its SUV stablemate at a £546 million, purpose-built factory in Casa Grande, Arizona. Some 2000 workers will be employed at the plant by 2022, with the company aiming to ultimately produce 20,000 units per year. The firm also plans to open 20 retail and service centres across the US by 2021.

Autocar's spam filters are the worst in the business. A genuine post can be blocked for something as simple as a slash symbol but, the spammers are not blocked, hopeless!

Well, here we are a year on and finally it's in production, it looks big, maybe because it's painted in Shanks White?, it certainly got better looks than a Tesla ( sorry Tesla guys) the interior looks better conceived than Tesla's,the only Fly in the Ointment is...no outsider has had a test drive, a drive to see if what they say the car can do is true, you wouldn't buy a car without getting some idea of how it drives, how it's built?.

If a startup can produce an EV as great as this, it makes me wonder why the heck legacy manufacturers have been sitting on their hands all these years. Sounds harsh, but they deserve to go bankrupt this decade.

I hope Lucid does well. I know they've only added a huge 113kWh battery to beat the Model S on range, as it's obviously not as efficient as the Model S... But they've designed a far better looking, proper luxury sedan.