BACK TO ALL NEWS
Currently reading: Limited-edition Ferrari J50 revealed in Japan
UP NEXT
Lamborghini Sterrato off-road supercar spotted testing

The limited-edition Ferrari J50 has been revealed which revives the targa-roof style used on models in the 1970s and 80s. Unveiled in Tokyo, it marks 50 years of the Italian company trading in Japan, hence the ‘J’ designation.

Only 10 J50s will be built and each will be made to suit the customer’s tastes.

All have front radiators that have been moved closer together to reduce the aerodynamic frontal area. There’s also a lower windscreen header rail to let more air flow over the aero foil incorporated into the rear deck and tail spoiler. 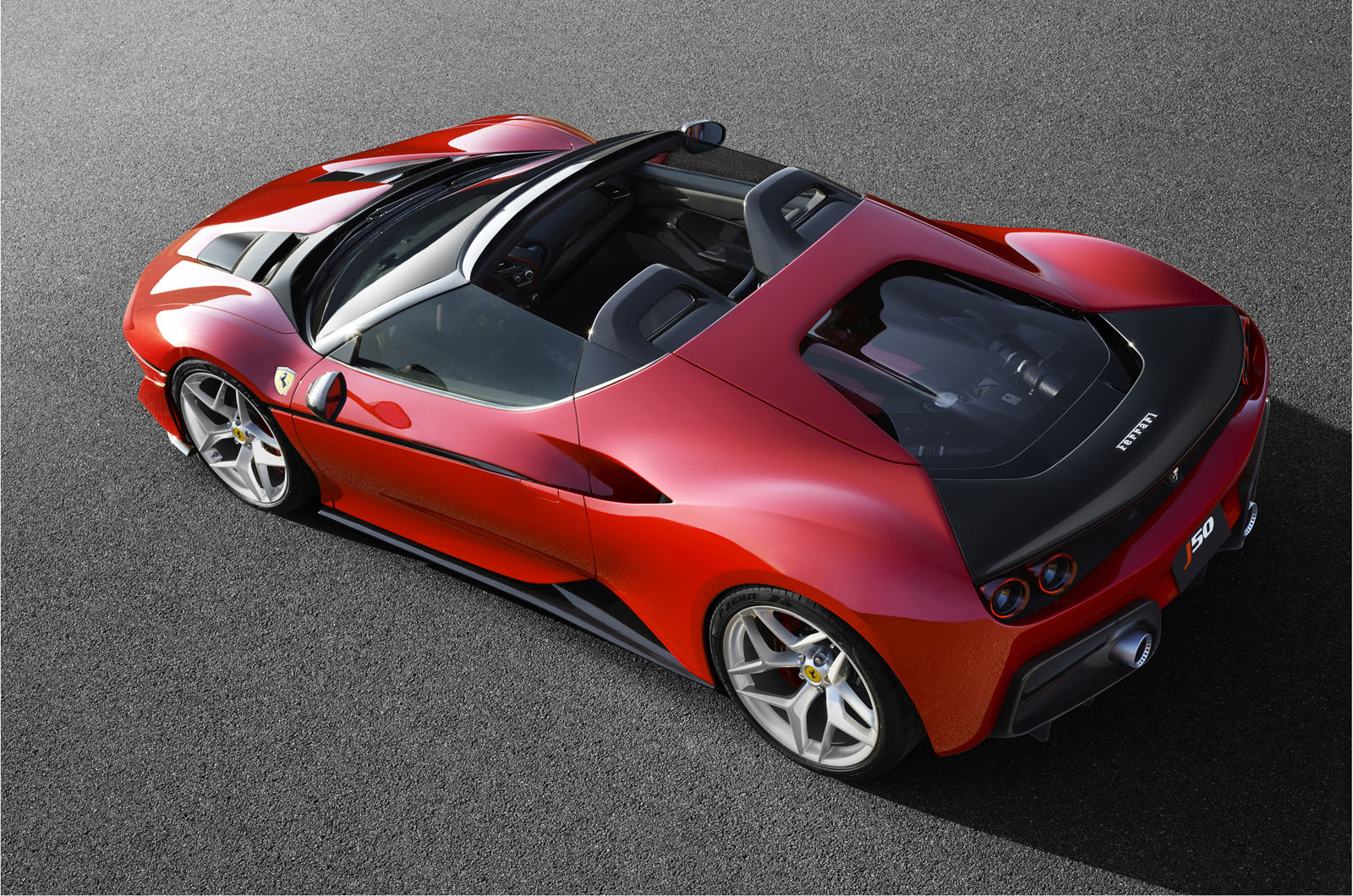 Ferrari’s Special Projects department has also lowered the bonnet and added two carbon fibre air channels reminiscent of the F50. Raised front wheelarch crests add to the visual aggression of the front, which has a prominent lower spoiler and full-width mesh grille.

Along the sides, there’s a black belt line similar that seen on the 288 GTO and F40. More inspiration from the company’s back catalogue can be seen in the sloping angle of the door windows. Ferrari says this is a nod to its competition barchettas and creates a ‘helmet visor’ effect.

The two-piece carbon fibre targa roof is stored behind the rear seats in a similar way to the 488 Spider’s single aluminium panel. Two roll bar hoops are incorporated into the lift-up cover and there’s a transparent polycarbonate engine cover. 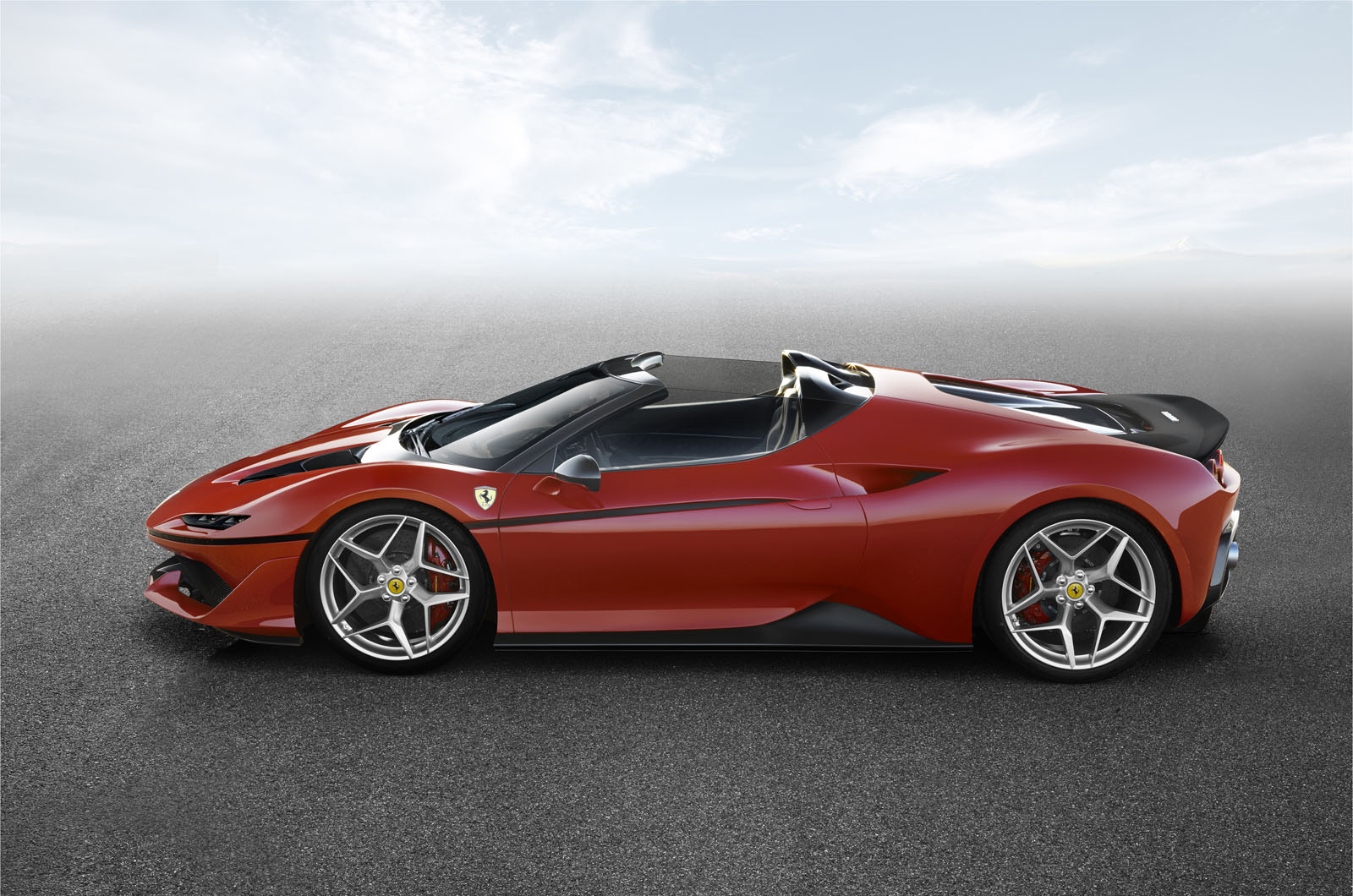 At the rear, the J50 has four tail lamps and a rear diffuser Ferrari says has been inspired by jet engine afterburners. Rounding off the exterior are 20-inch forged alloy wheels in a unique design for this limited run model.

Inside, the sports seats have an Alcantara centre section where the shape mimics the design of the rear deck. Customers will also be able to specify their own colour combinations for the upholstery.

Ferrari has not confirmed any pricing or performance figures for the J50 and all 10 will be sold to existing loyal customers.

These words came from me, a non-Ferraristi. Initially I thought it is the perfect replacement for the Ferrari the Ferrari, until I realised it is meant for the Japanese market.

More bespoke creations please for nations around the world.

I agree that this is definitely the nicest looking Ferrari for some time. It's a great design and I hope that the standard models will take design inspiration from this. Looking forward to seeing photos of the actual car. Fingers crossed one of the lucky customers ships it across to show at Goodwood!
finecitytom 13 December 2016

Left hand drive? Not completely to customer tastes then....

Don't the Japanese consider LHD drive cars to be more exotic? I've not read anything that suggests that it will be limited to to LHD either. I can't imagine that it wouldn't be possible for it to available in RHD as well as the interior is pretty much stock from the 488 so it's not as if any extra tooling would be required. Maybe I'm wrong?