BACK TO ALL NEWS
Currently reading: Lamborghini to focus on supercapacitor tech for first hybrids
UP NEXT
New Porsche 911 Turbo arrives with 572bhp flat-six

Lamborghini to focus on supercapacitor tech for first hybrids

Lamborghini’s first series-production hybrid models are set to feature pioneering electric technology, with the supercar firm focusing on lightweight supercapacitors and the ability to use carbonfibre bodywork to store electrical energy.

The Italian manufacturer has teamed up with the Massachusetts Institute of Technology (MIT) on a number of research projects focused on supercapacitor energy stores – which can be charged faster and store more energy than similarly sized lithium ion batteries – and ways of storing energy in new materials.

Riccardo Bettini, Lamborghini’s head of R&D project management, said that although it is clear that electric power is the future, the current weight requirements of lithium ion batteries meant that “at the moment, it’s not the best solution” for the firm. He added: “Lamborghini has always been about lightness, performance, enjoyment and engagement. We need to keep that in our super-sports cars in the future.”

The technology was previewed on the Terzo Millennio concept car, shown in 2017, and a small supercapacitor will be featured on the forthcoming limited-run 808bhp Sián FKP 37. That model pairs the firm’s 6.5-litre V12 with a 48V e-motor built into the gearbox and powered by a supercapacitor. The e-motor produces 34bhp and weighs 34kg and Lamborghini claims it’s three times faster to charge than a lithium ion battery of equivalent size. 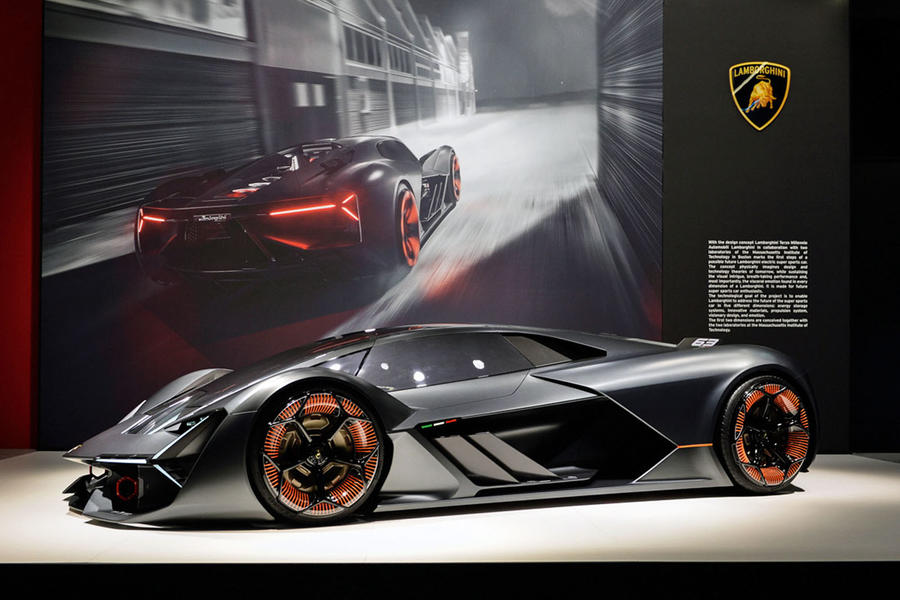 Although the supercapacitor used on the Sián is relatively small, Lamborghini and MIT are continuing their research. They have recently secured a patent for a new synthetic material that can be used as the “technological base” for a more powerful next-generation supercapacitor.

Bettini told Autocar the technology remains “at least two to three years” away from being production ready but supercapacitors are “the first step in the roadmap” to electrified Lamborghinis.

A related MIT research project is studying how to use carbonfibre surfaces infused with synthetic materials for energy storage.

Bettini said: “If we can capture and use energy much faster, the car can be lighter. We could also store energy in the bodywork, using the car as a battery, which means we can save weight.”

Although Lamborghini aims to roll out hybrid powertrains in the coming years, Bettini said it is still working towards a target of 2030 for its first full-electric car while the firm studies how “to keep Lamborghini’s DNA and emotion”.

Despite that, Autocar understands the marque is considering making its planned fourth model line, set to be a four-seat grand tourer due around 2025, fully electric. It is also likely to launch a conventional plug-in hybrid version of the Lamborghini Urus using the powertrain featured on the closely related Porsche Cayenne.

Lamborghini is undertaking research to develop a sound for its electric cars that will ensure maximum driver engagement. The firm has long regarded the sound of its V10 and V12 engines as key to their appeal.

“We’ve tested with professional drivers in our simulator and switched the sound off,” said Lamborghini R&D’s Riccardo Bettini. “We know from the neurological signals that when you stop the sound, the engagement falls because the feedback disappears. We need to find the sound of Lamborghini for the future that can allow our cars to retain emotion and engagement.”