BACK TO ALL NEWS
Currently reading: Kia Stinger GT420: wild one-off track car driven
UP NEXT
Analysis: Why the decline in diesel sales has slowed in 2022

Sometimes the answer to a question is very simple and straightforward, such as when we asked Kia why it built the Stinger GT420 track car. ‘Because we can’, came the instant, grinning reply.

Essentially it’s a one-off track car created as a sort of after hours project between Kia UK and the brand’s Engineering Centre in Russelsheim, Germany. Using as its base the first pre-production Kia Stinger GT-S to arrive in the UK, the GT420 has been stripped of weight, given a power boost and had its suspension thoroughly overhauled.

Those at Kia will tell you it’s all just for fun, something they did because they could. But then again, you don’t put this much effort into a project if you don’t intend to learn lessons from it - lessons that might filter down to future, faster models….

What changes has Kia made to the Stinger to make the GT420?

Well for starters the GT420 is around 150kg lighter than the standard car, with much of the weight saving achieved by strippng the interior back to its bare bones. The steering wheel (minus airbag), dashboard, gear selector and driving modes controller remain, but the rest of the interior has been ditched, including the back seats, rear electric windows, the sunroof and the sound system. Installed in the bare metal cabin are a pair of Sparco race seats each with a four-point harness, a bespoke rollcage and, nestling in the spare wheel well, a Lite Blox lithium polymer battery that saves 22kg alone.

Under the bonnet, the twin-turbocharged 3.3-litre V6 now delivers 422bhp and 413lb ft, increases of 57bhp and 37lb ft respectively. These gains have been achieved by tweaking the ECU, plus adding HKS spark plugs, a freer flowing K&N air-filter and a de-catted quad exit Milltek Sport exhaust system. And while the eight-speed automatic transmission is carried over unchanged, there are some tweaks to its mapping and the addition of larger oil cooler to cope with the increased demands of track work. 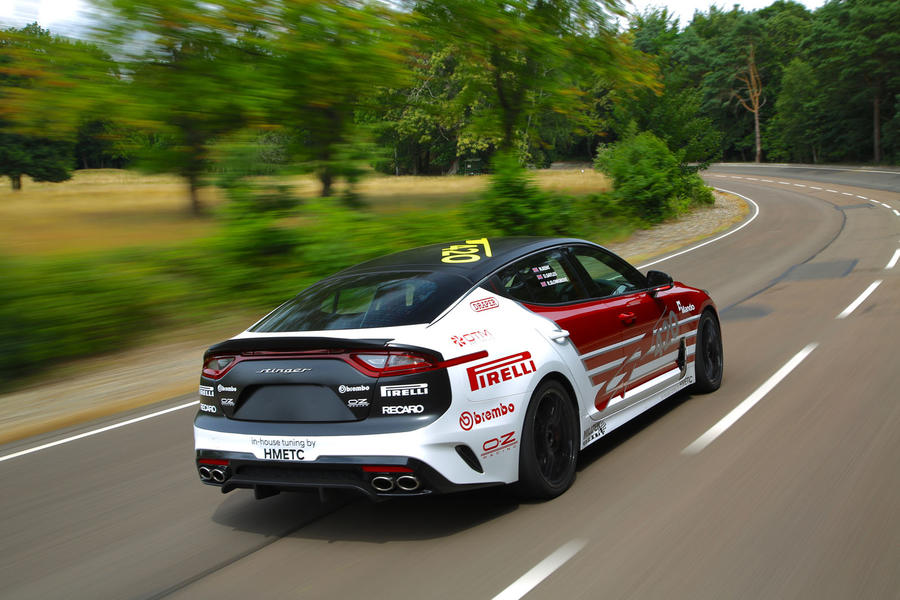 Even greater work has been undertaken on the suspension, which features stiffer Eibach Pro springs and heavily recalibrated Mando passive dampers in place of the standard adaptive units. There’s also a modified front crossmember that allows for an increase in negative camber to 2.5 degrees, while at the rear are a pair of extra strengthening bars for greater rigidity and control. Furthermore, the front anti-roll bar has been increased in thickness to 25mm, while at the rear is a 17mm unit.

Six-pot Brembo calipers clamp 380mm discs at the front (connected to the pedal with motorsport grade braided hose), while the standard wheels are replaced by 5kg lighter OZ Racing Leggera 19-inch rims, wrapped in Pirelli Trofeo-R rubber. To cope with the extra grip and retardation both the ESP and ABS have had their software massaged.

Externally, the GT420 is no shrinking violet, mainly due to the fact that the already bold shape is covered in quasi-racing livery that includes the names of those OEM manufacturers that have supplied upgraded parts and technical knowhow. There’s also a front splitter, a larger rear diffuser and an extended tailgate spoiler - although the aerodynamic advantages are moot.

Perhaps the most telling indication of the skunkworks nature of this project are the rather rustic plastic brake cooling ducts that have been inserted into the front bumper.

We were let loose on Silverstone’s International circuit to find out, but not before some sighting laps in the standard GT-S. It’s a timely reminder of what a surprisingly quick and approachable car the Stinger, yet after a couple of laps the tyres and brakes are starting to lose their battle against its hefty 1,855kg kerbweight.

Before going anywhere in the GT420 you have to fold yourself through the narrow gap in the rollcage. You'll then find you sit nice and low in a Sparco race seat and are clamped firmly in place by the four-point harness. The view straight ahead is fairly familiar, but look away from the dashboard and around the cabin and you’ll see what seem like acres of bare metal and miles of exposed wiring. It looks and feels like a proper racer. It sounds like one too.

Thumb the starter and the V6 crackles noisily into life - and it gets even louder as you start to work it hard. The combination of lower kerbweight and increased power means the Kia feels like a potent performer, even within Silverstone’s wide expanses, which tend to sap speed sensations. Yet it’s that soundtrack that really makes you giggle, the hard-edged metallic note hardening and the volume increasing hilariously as the engine really gets into its stride beyond 4,000rpm. Flat chat upshifts are accompanied by a shotgun crack, while there’s a lovely popping on the overrun - although the changes themselves take a little too long to respond to the paddles. 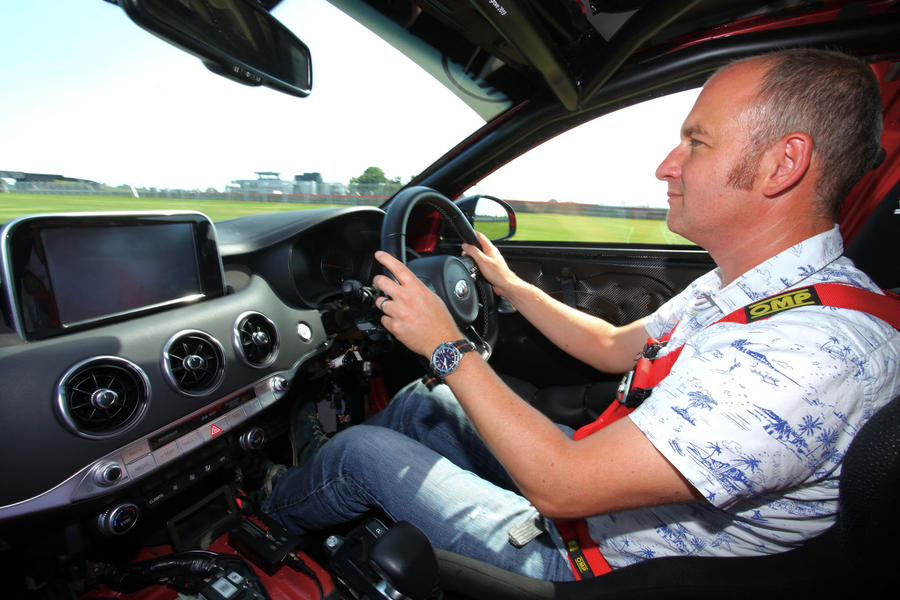 As you’d expect with such specialised rubber, grip is tenacious, the Stinger clinging on hard where the standard car washed way wide. There’s not much feel through the steering, but there’s plenty of front end bite, allowing you to place the car confidently and precisely. Through faster turns the Kia takes a nicely neutral stance, little lifts and dabs of the throttle being all that are needed to subtly shift the car’s balance and attitude. And while there’s still some body roll, it’s extremely well controlled, even through fast direction changes. With so little weight over the rear axle and a muscular torque output you’d expect the Stinger to slide sideways at will out of slower corners but, in the dry at least, traction is terrific. Provoke the Kia, however, and it’ll happily be coaxed into neatly controllable oversteer, only straying as far as your right foot allows.

The brakes deserve a special mention, tirelessly hauling the Stinger down from big speeds, while the well weighted and progressive pedal allows you to consistently nail braking points that are tens of metres shorter than the standard car’s.

It’s not perfect; the GT420; it’s relatively short gestation means it’s a little rough around the edges and in need of some more fine tuning, particularly to the gearbox. Engineers would also have liked to have more time to have been able to modify the adaptive dampers, which would allow the car a wider operating bandwidth (the current stiff set-up makes it somewhat lively around the Nurburgring, by all accounts). But it is huge fun, and as a track car with a difference it’s a compelling proposition. 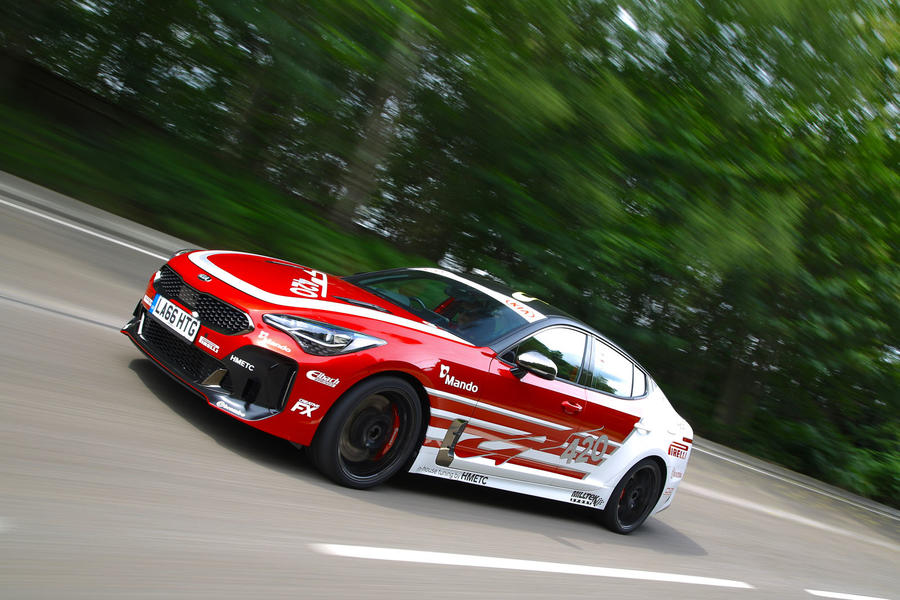 Will Kia ever put something like the Singer GT420 into production?

Right now, this is genuinely a one off, not-available-in-a-dealer-near-you car. Kia is keen to stress that it’s just a bit of fun, something for the engineers to get their teeth into between jobs and out of hours. Yet, for such an allegedly ad-hoc project, a lot of effort has been put into the car, not least the time spent pounding around various tracks - five days alone was spent on damper calibration.

What does this mean? Well, a company as large as Kia doesn’t do something for nothing, and the twinkle in the eyes of some of the engineers suggest that this wasn’t an entirely a dead-end project. Of course, nobody was saying anything, but it’s not too much of a stretch to imagine the lessons learned here might filter down to a faster and more focused Kia model at sometime in the future. Well, we can hope, can’t we?

I hope they make some of these mods optons as say a track day pack or even the exhaust as optional extras.I've seen a few of these on the road and nice looking car.
Will86 26 July 2019

A company who values their engineers

Sounds like an old graphics card.
View all comments (4)