BACK TO ALL NEWS
Currently reading: Kia Stinger: behind the design
UP NEXT
Exclusive: Morgan bosses detail ambitious growth plans

Kia Stinger: behind the design

As Kia leaps all guns blazing into a fight against the established premium sporting hegemony, we've met the designer of its bold challenger, the Stinger
Open gallery
Close

"It’s like Christmas,” says Gregory Guillaume, as we both stare wide-eyed at the car.

I’m not seeing a lot of tinsel or coloured lights, but I do see what still excites Kia’s European design chief about a project he began as a concept around seven years ago.

He’s talking about the graceful and unmistakable rear-drive proportions of the new Kia Stinger, the four-door GT Guillaume believes will complete a “paradigm shift” for the Korean brand when it hits the market early next year. Good proportions are like a Christmas present: start with those and it’s much easier to build great-looking cars. 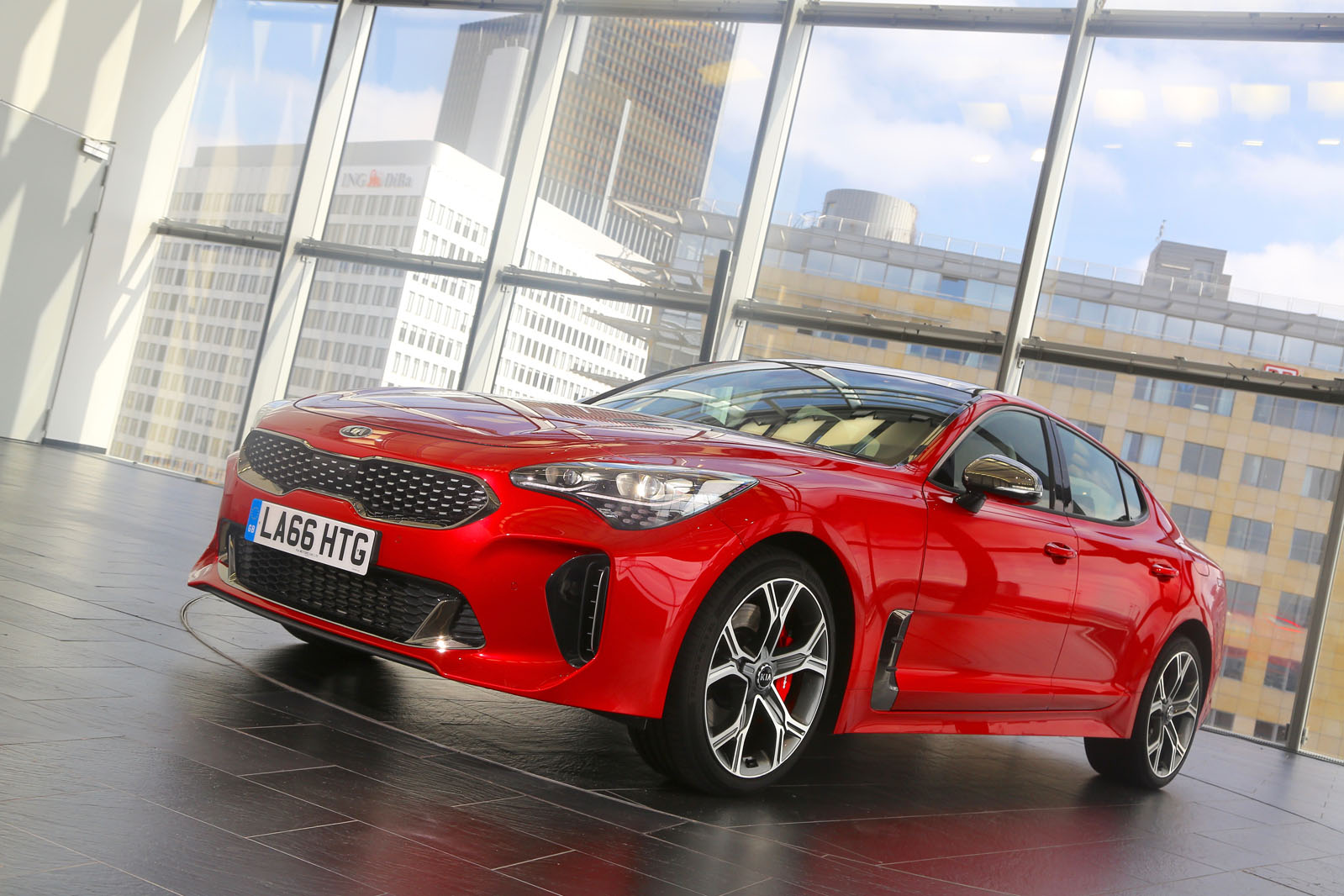 Standing next to the new Stinger, the key facets of the layout become obvious: the long bonnet, the short front overhang, the low roof of a cabin pushed to the rear and, above all, the generous dash-to-axle dimension that clearly advertises the fact that there’s a potent north-south engine in there, driving either the rear wheels or, in some cases, all of them.

It looks so different from the Kias and Renaults and Fords we know, the workaday, nose-heavy, frontwheel-drive creations that crowd every cranny of the car market. This is a proper car, aimed specifically at enthusiasts. It will challenge the BMW 4 Series Gran Coupé and the Audi S5 Sportback from a direction they must have been expecting for a while. With a top model packing a 360bhp V6, a 5.1sec 0-62mph sprint time and a 160mph top speed, this Stinger will sit just below Europe’s most hardcore saloons, such as the BMW M3 and Mercedes-AMG C63, but not by much. In fact, it’s a little larger than its German peers, with Guillaume valuing length in cars for both its grace and its space. So the Stinger is 200mm longer than a 3 Series and nearly 100mm longer in the wheelbase – but it’s 58mm lower.

Guillaume, a life-long car lover in a way some design chiefs are not, defines the way in which the Stinger combines imposing proportions with power by referring to his inspiration, the Giugiaro-designed Maserati Ghibli of the early 1970s.

“We didn’t take anything from that car’s design,” he says, “but from its character. It was built for making journeys in great comfort across Europe, and that is the spirit of the car we set out to create.”

When you see it for the first time, you have to wonder why Kia didn’t press the button on the Stinger a long time ago, given that it’s closely related to the Kia GT concept revealed at the Frankfurt show in 2011. Kia has been noted for its design flair for a few years now, impressing with its SUVs and small cars, and Guillaume is one of the pioneers of Kia’s era of good design, arriving slightly before colleague Peter Schreyer, who is also credited as leader of a revolution. 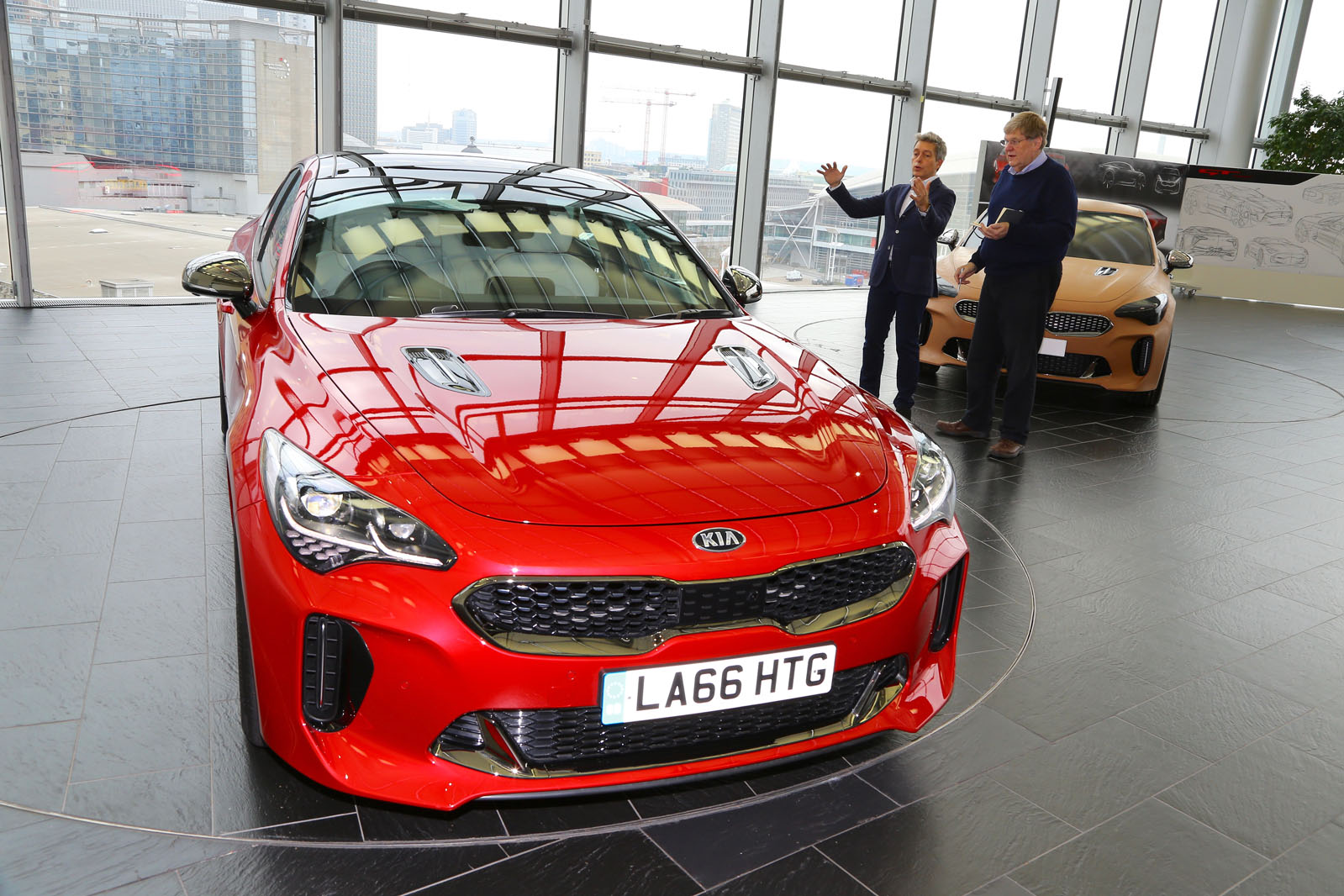 But there’s more to a car like this than building it, says Guillaume. “It’s not easy just to launch yourself into a car like Stinger,” he explains. “You have to know the timing is right, and that the brand has the credibility to carry such an emotional product that aims challenge some of Europe’s best. We believe we’ve reached that stage.”

Another important point was knowing the car would have the underpinnings to match its looks, an area where Korean cars have failed in the past. These concerns led the company to hire Albert Biermann, former head of BMW’s M division, as chief engineer. Guillaume proudly remembers Biermann’s first reaction at the sight the Stinger prototype: “Right,” he said. “We’ll have to make sure this car drives the way it looks…”

We’re meeting in Kia’s European design HQ, from which Guillaume usually operates, although he travels monthly to Korea. The Frankfurt viewing studio is five floors up, with a double-height ceiling, huge windows emitting a flood of natural light and giving a panoramic view of the city. Guillaume is showing us three models today: the original GT concept that usually lives in Korea, an interim full-size model used to investigate alternative design details and a fully representative late prototype, which has been in the UK doing road trials with Biermann and his team and was tested by this magazine earlier this month. Kia believes that a car that can handle UK roads will work everywhere. 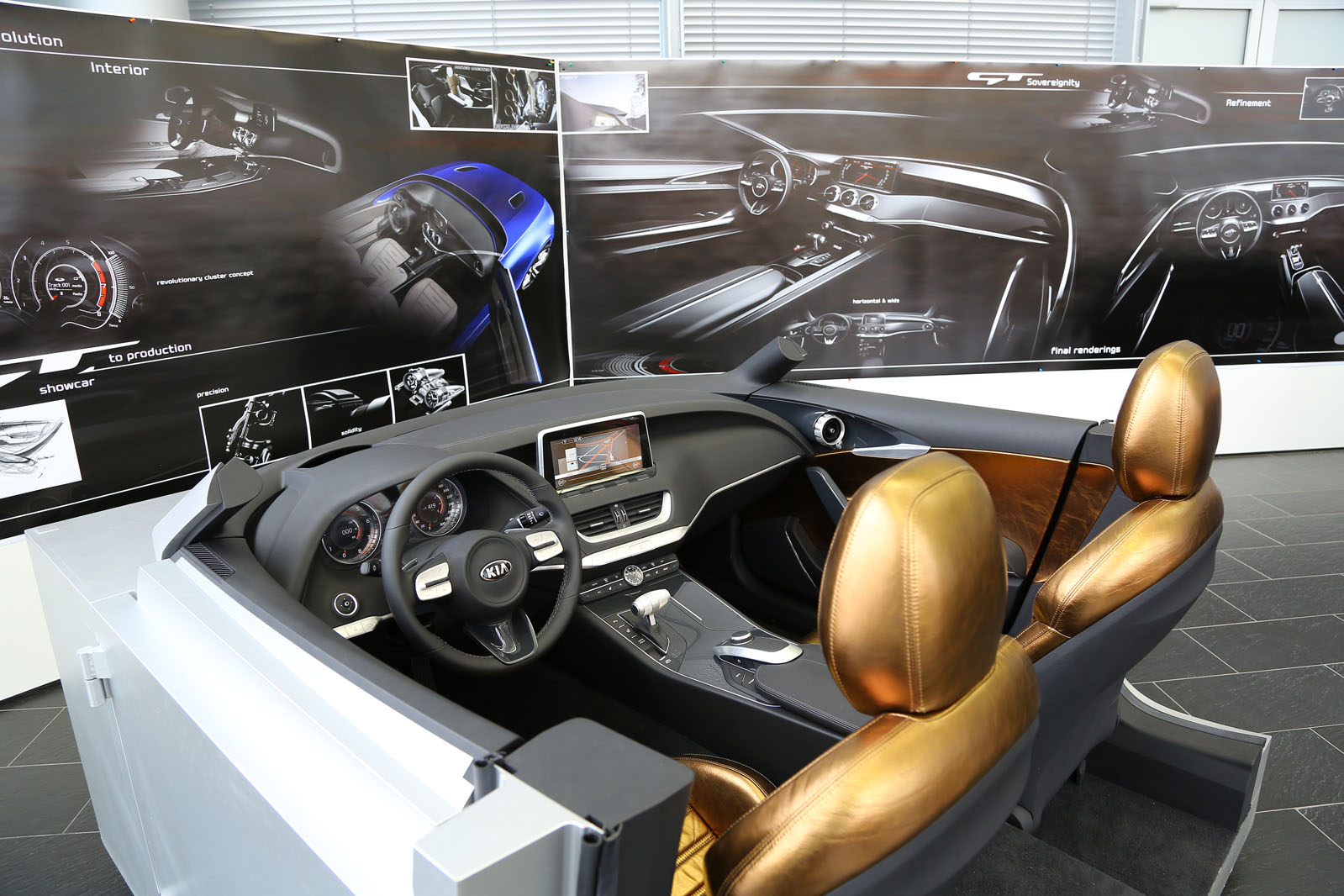 We’re also seeing an amazing early cockpit buck with gold seats (“I thought that if we were doing something different we should take it quite far…”) and another much closer to the keep-it-real, driver-focused, “more analogue, more honest” treatment that was eventually chosen for production. Powertrain details are well known: two petrol engines, one diesel, all driving through an eight-speed torque converter auto with a similar degree of driver control to a typically European dual-clutch set-up. The car also has Brembo front brakes, 19in tyres that are differently sized front to rear on the top model and a new adaptive damping system. All the accoutrements a quick car is going to need, in other words.

We take a walk around the car with the man who inspired it, noting the finer features of the design, such as the prominent rear diffuser under a graceful coupé back-end, the subtle but strong rear haunches, the taillights connected by a reflector and the lower air scoop that carefully avoids stealing emphasis from the classically Kia ‘tiger nose’ grille.

Even for this emotional car, Guillaume says, there were numerous areas where design restraint was needed, such as leaving out a rear hatch. “We wanted the fastback look,” he explains, “but not the extra structure and weight of a hatch”. Likewise, they decided against an active rear spoiler because of weight, complexity and the fact that it would have introduced an extra rear shutline. But the original concept’s vents behind the front wheels were kept (Guillaume calls them “breathers”), because they have a genuine function in reducing aero pressure in the wheel housings.

Guillaume’s favourite feature is the Coke-bottle shape, which isn’t very noticeable at first but becomes more implicit as you gain familiarity with the exterior. “It’s represents the car’s whole character,” he says. “It’s relatively subtle, but powerful, too.”

If it doesn't undercut the

If it doesn't undercut the much more desirable Germans by a large amount, it's dead in the water. Purchase price is only part of the story. Residual values and the consequent depreciation need to be competitive compared to the opposition, which they won't unless the starting price is much lower. And lease rates depend on it.
rybo1 7 May 2017

Looks like a 5 door Ford Capri. Is that a good thing- I'm not so sure.
View all comments (9)