We’ve driven two right-hand drive Stingers on UK roads. One was the 2.2-litre diesel, the other the 3.3-litre V6 GT range-topper, which we also briefly tried on a track.

At 4.83m, the Stinger is quite long compared with the BMW 4 Series Gran Coupé (4.64m) and Audi A5 Sportback (4.73m) and it has an unusually long 2.9m wheelbase. That, Hyundai Kia performance chief Albert Biermann said, has advantages for packaging, ride comfort and stability but presents some challenges in making the rear-wheel-drive Stinger feel as agile as the best cars in the class.

At the moment, the 2.2-litre diesel will arrive in the UK with only passive dampers, which give a relatively controlled ride. It does have drive modes, though, which adjust the engine and gearbox response (an eight-speed auto is standard) and steering weight. In Comfort mode, the steering is nicely weighted, with decent self-centring and good accuracy and linearity. In Sport, it takes on a bit too much heft for our liking and will probably be toned back before launch. 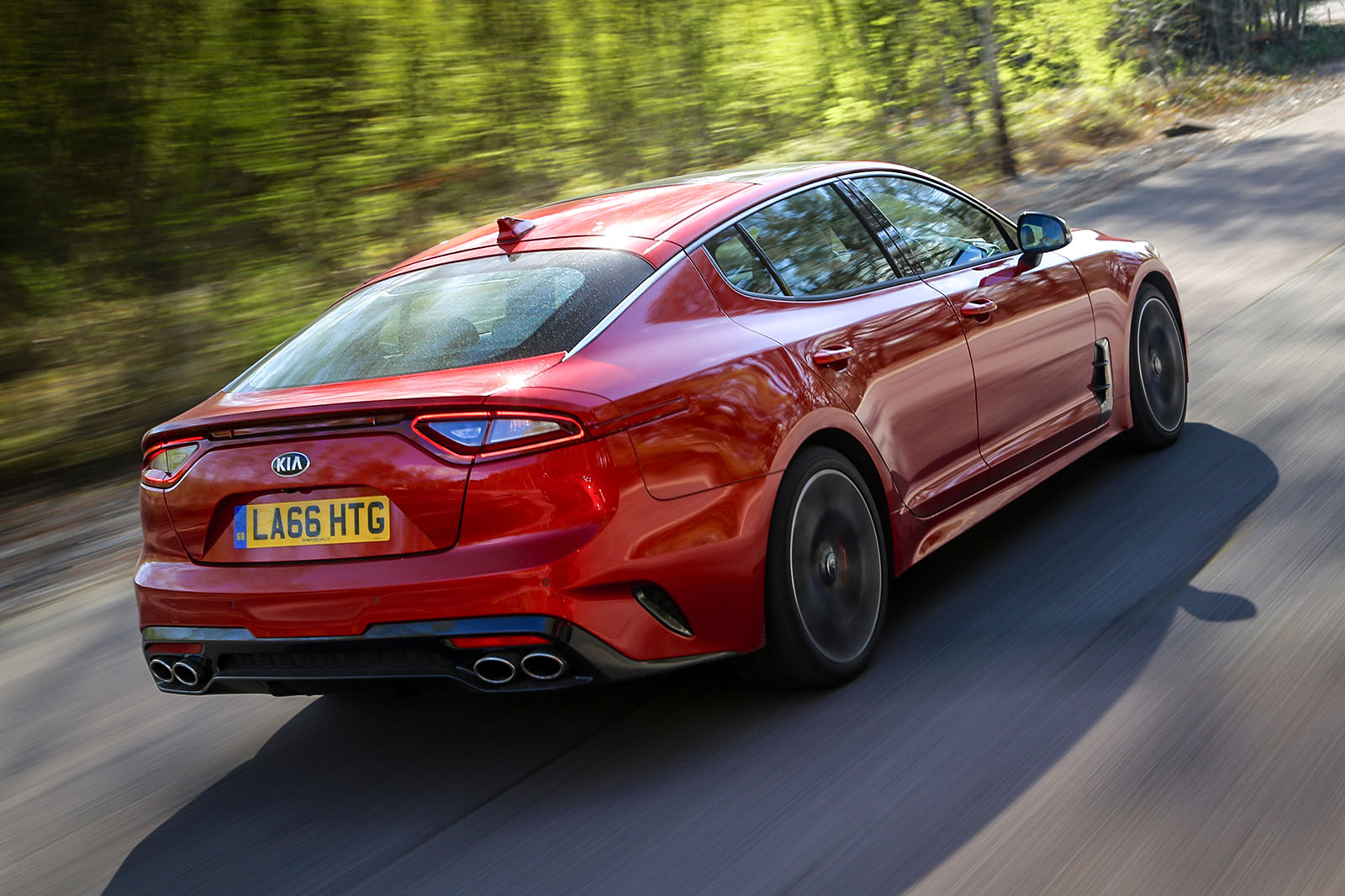 The 197bhp 2.2-litre diesel performs well enough. In Comfort, the gearbox response could be sharper, but it’s better in Sport and you can always use the steering wheel paddles. The management at Kia Europe think the car could be less sporting but Biermann — rightly, in our book — has told them they’re wrong.

The Stinger GT, with its 370bhp V6, has adaptive dampers as standard and, despite being heavier than the 2.2 diesel, offers a much greater feeling of agility.

Obviously, it gets on a fair bit quicker, too. Development of the exhaust has been signed off, but it doesn’t sound rorty enough at all Biermann and his colleagues said Kia will aim the Stinger GT just below Audi S5 levels of focus. It could afford a stiffer ride quality than it has at the moment, especially in Sport mode, which isn’t that much firmer than Comfort. 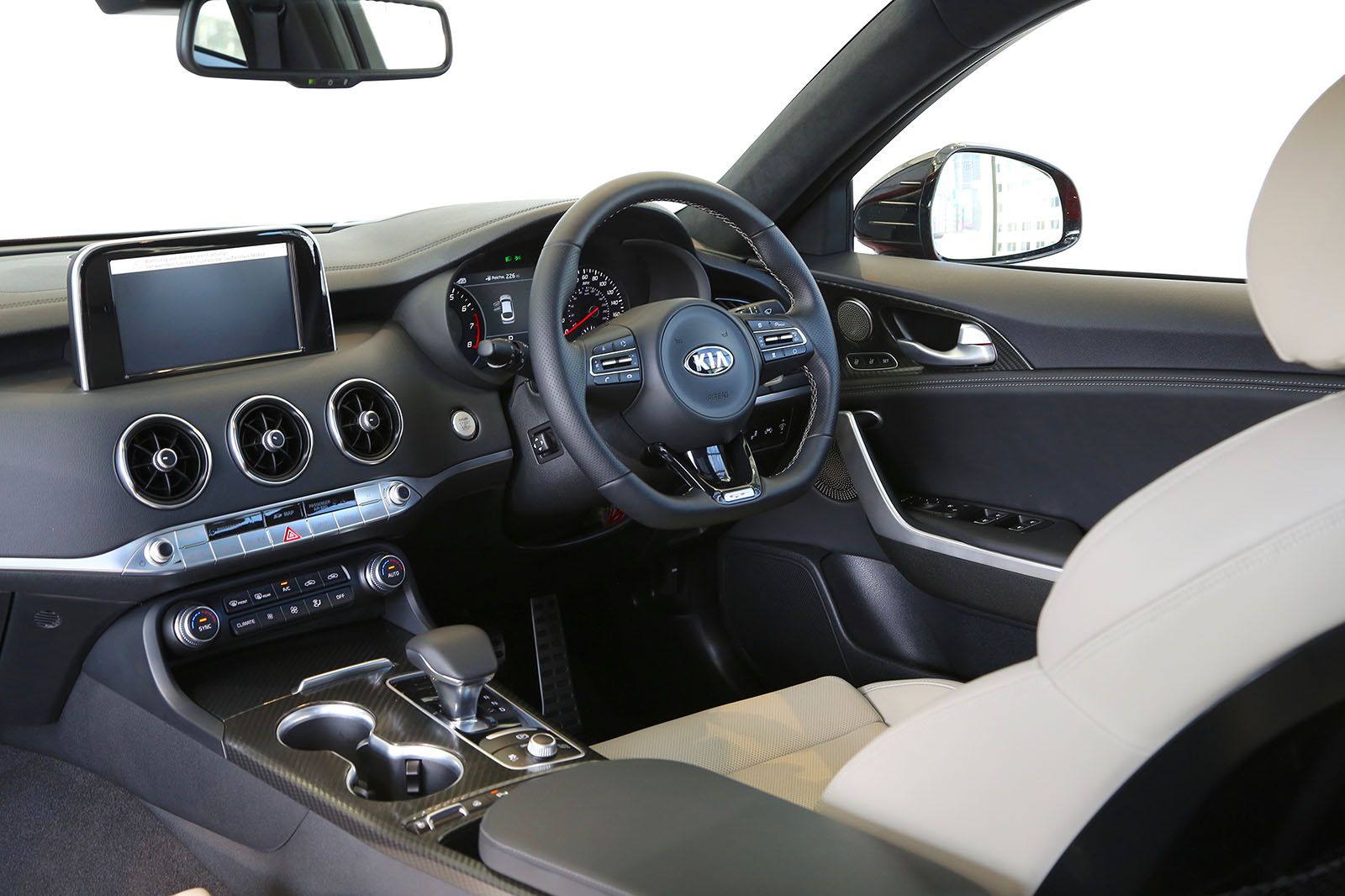 Body control is reasonable on the road but it feels less settled on a test track, where there’s some heave over larger crests. What it also does is fall into some pretty lively oversteer, easily exploited by the standard mechanical limited-slip differential, long wheelbase, nicely geared steering and a broad powerband from the turbocharged V6.

There’s still some tweaking to be done on most models, whose weakest point is a set of materials inside, particularly on the lower part of the cabin, and an infotainment system that lags a way behind the premium class best.

It's a shame the Stinger will

It's a shame the Stinger will be almost too good looking for our roads chock-full of squat, pug-faced nissan jukes, minis and dull as dishwater focuses and astras.
Mark Rodriguez 12 April 2017

It's a shame the Stinger will be almost too good looking for our roads chock-full of squat, pug-faced nissan jukes, minis and dull as dishwater focuses and astras.

My thoughts exactly. Kia is wasting their best looking car on the rather drab automotive scenery of this country and the habitually strange aesthetic tastes of English motorists many of whom would sadly fail to appreciate the beauty and elegance of the design. Little wonder then that cars like the Nissan Juke which resembles a squat, pug-faced warthog more than anything else sell so well here.