BACK TO ALL NEWS
Currently reading: Jeep Renegade and Compass gain mild e-Hybrid variants
UP NEXT
New Volkswagen Golf R 20 Years is most powerful production Golf

Jeep has revealed pricing and specification information for new mild-hybrid variants of the Renegade and Jeep Compass SUVs, which start from £31,130 and £32,895 respectively.

The two models already offer plug-in powertrains but gain a new e-hybrid option, which the firm says provides savings of 15% on fuel consumption and CO2 emissions compared to petrol models currently on sale.

Both cars are driven by a four cylinder 1.5-litre turbocharged petrol engine producing 130bhp and 177lb ft, mated to a seven-speed automatic transmission.

A 15kW (20bhp) electric motor offers energy recuperation, regenerative braking and fully-electric drive during vehicle start-up and setting off, when parking, at low speeds and when cruising.

The Renegade and Compass both benefit from similar levels of equipment, including an updated instrument panel to display information about the hybrid system.

An 8.4in touchscreen display is fitted as standard, which can be upgraded to a larger 10.1in unit on the Compass. The models gain a pre-installed Uconnect box, used to control remote functions with Google Assistant and Amazon Alexa. 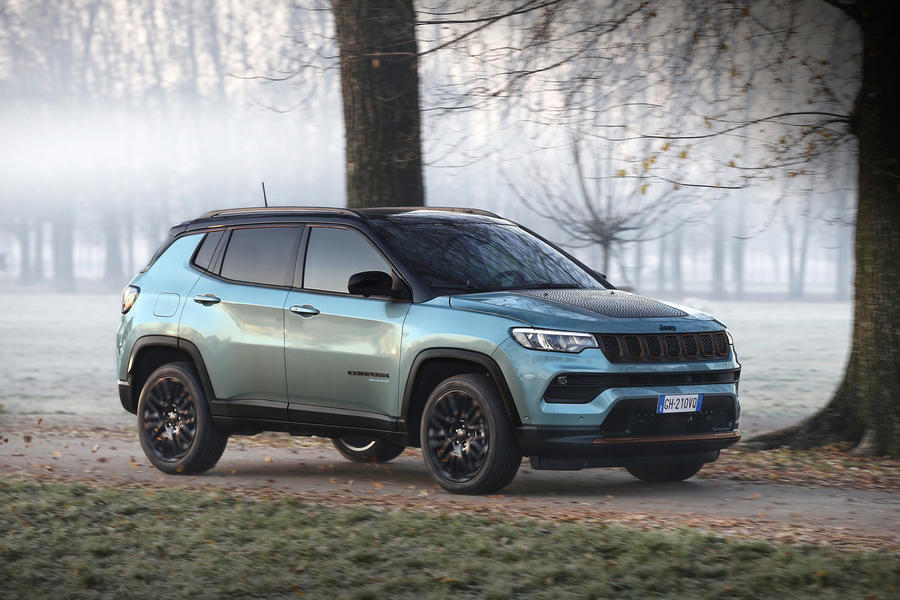 Both cost significantly less than their plug-in counterparts and gain a special Upland specification at launch.

Upland models gain bespoke design features including a Maz Azur exterior paint, a two-tone black roof and 17in gloss black wheels on the Renegade, upgraded to 18in alloys on the Compass. Both also receive a special front grille with a bronze chrome finish.

The Compass is available with four trim levels: Night Eagle, Limited, Upland and S, with prices starting from £32,895. The smaller Renegade is offered with Upland and S specifications and is priced from £31,130.

Jeep says the plug-in 4xe range of its cars currently account for more than 25 per cent of the brand’s European sales and that its flagship Grand Cherokee will also receive a plug-in model later this year.

The US firm says mild hybrid variants offer a new entrypoint into the range for customers who are interested in electrification.

“Today’s announcement builds upon the success of our current 4xe plug-in-hybrid portfolio, and is another step towards the comprehensive electrification of our full product line-up in Europe” said Antonella Bruno, head of Jeep’s European operations.

“The Jeep Compass and Renegade e-Hybrid offer a new entry point into our electrified portfolio expanding our sales momentum by offering more hybrid options to more European customers. This product expansion will continue in the summer of this year with the introduction of the 4xe version of the all-new Jeep Grand Cherokee,” Bruno said.

UK Deliveries will begin in March. Autocar has contacted Jeep for full equipment and specification levels.

Log in or register to post comments
si73 20 January 2022
The US firm says mild hybrid variants offer a new entrypoint into the range for customers who are interested in electrification.

Didn't mean to finish there. I thought it was no longer a US firm since being part of FCA and now Stellantis.

Jeep is from the US, headquartered In the US, makes the majority of its sales in the US and has most of its plants in the US? Where are you trying to say it's from?

Stellantis is a multi national owning brands from a number of different countries. By your logic would that make Land Rover Indian? Although I think by most with common sense it's still considered a British company.

Jeep is the top selling brand for Stellantis. So does that make Stellantis a US firm? Probably not. But clearly a good chunk of Stellantis profits come from US operations, notably Jeep and Ram, neither of which anyone would try and argue are not US brands.

si73 22 January 2022
I thought Jeep was no longer a US brand is all I said, no need for the rant, I stand corrected, I thought FCA was headquartered in Italy and know that stellantis is multinational. And many consider Volvo to now be Chinese and JLR to be Indian etc, personally I don't, but did think Jeep was now centered in Europe under FCA. Hence me asking not stating.