Most powerful version of Ford's first EV beats the Jaguar I-Pace and Polestar 2 from 0-62mph, will cost £67,225
Open gallery
Close

Ford has given its range-topping Ford Mustang Mach-E GT a first public outing at the Goodwood Festival of Speed, as order books open ahead of customer deliveries later this year.

The 459bhp electric SUV will start from £67,225, with a promise that “nothing in its class can accelerate faster”.

The hot version of the Ford Mustang Mach-E, arriving in Europe towards the end of 2021, is claimed to hit 62mph from rest in 3.7 seconds, eclipsing the sprint times of the Jaguar I-Pace and Polestar 2 by more than 0.5sec. It will have more torque than any other production car Ford has ever sold to European customers.

Early data suggests the Performance version of the Tesla Model Y electric crossover will complete the same sprint in 3.5sec, but that's yet to be confirmed for a European launch.

The GT’s considerable performance advantage over the standard Mach-E comes courtesy of its uprated powertrain. This comprises an electric motor on each axle, producing a combined 459bhp and 612lb ft, and powered by an 88kWh battery with a targeted range of 310 miles.

The GT is marked out from other Mach-E models by its bespoke 20in alloy wheels, red brake callipers and the availability of Cyber Orange and Grabber Blue paint options, while the topping Magneride adaptive suspension system is equipped as standard.

It also gains a new Untamed Plus drive mode, intended for track use, which dynamically adjusts traction and stability control for a more exciting driving experience when conditions allow for it. 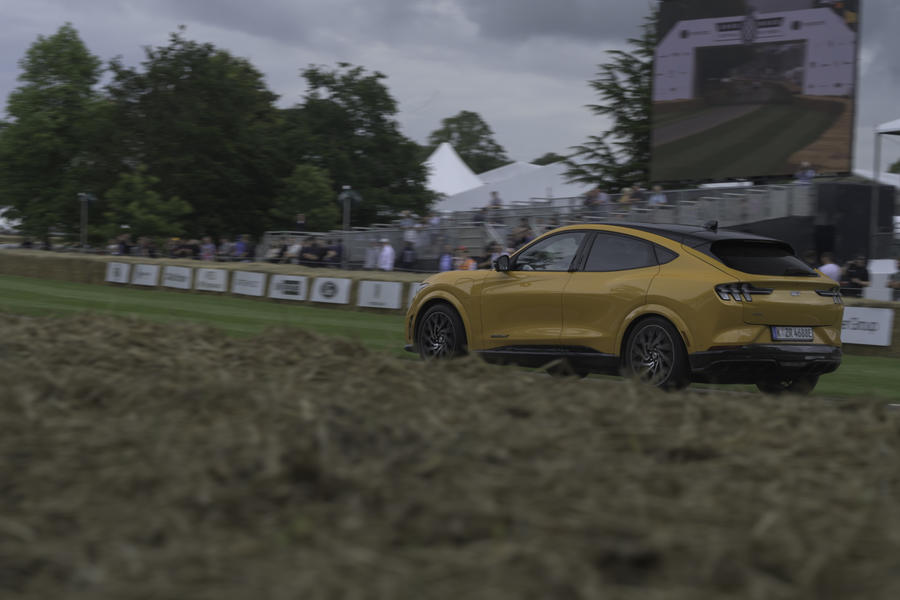 Ford’s European boss Stuart Rowley said: “The new Mustang Mach-E GT shows what all-electric performance really looks like, but performance counts for nothing without the confidence to use it.

“Our charging initiatives mean Mustang Mach-E customers can enjoy the electrified Mustang driving experience with the knowledge that they can recharge quickly and easily across Europe.”

At the GT’s unveiling, Ford confirmed that European Mach-E buyers will receive five years of free access to the brand’s expanding FordPass charging network, which currently comprises more than 155,000 charging stations across the continent.

The GT made its public debut in Rotterdam, the Netherlands, and was shown alongside the seven-motor Mustang Mach-E 1400, which serves as a 1399bhp showcase of what Ford’s Performance division can achieve with an electric powertrain.

Rowley said that although “one is a production model, the other an extreme prototype”, the two models both offer “immediate, adaptable power delivery, creating a driving experience that has to be experienced to be believed”.

Log in or register to post comments
Cobnapint 10 July 2021
I agree with ricequakers, take the silly Mustang badges off and re-do the rear lights. This is not America and neither do we want it to look like America.
TStag 10 July 2021
I’d buy the Jaguar I Pace with it’s proven reliability (and I’m not joking about that). It’s at or around the top of its class with a score of +98%
Andrew1 9 July 2021
But why did they make it an SUV, why?
View all comments (9)