BACK TO ALL NEWS
Currently reading: Ford Focus RS500 super-hatch could be canned
UP NEXT
2022 Mercedes-AMG SL gets four seats, 4WD and 577bhp V8

The super-hatch Ford Focus RS500 is on the verge of being canned because the business case for the model is looking weak.

Although the project hasn’t yet been officially called off, sources only give the RS500 a 30% chance of making production.

Ford had been planning the RS500 with a power hike to near-390bhp, plus track-focused handling and more aggressive styling to sit above the hugely-successful 345bhp RS. Sightings of a test car (shown below) suggest the model's development was already underway.

However, the RS500 has run into a couple of obstacles, one of which is where the RS500 will fit in with Ford’s other performance models - most notably the 410bhp Mustang 5.0 V8 GT and 526bhp Mustang Shelby GT350.

"It could be treading on other cars’ toes," according to well-placed sources.

Overlap with the Mustangs is not such a problem for Ford Europe, which believes there is a market for both the RS500 and Mustang.

However, in the US it is understood to have put a question mark over the RS500 and whether Ford’s American dealer network wants the car. 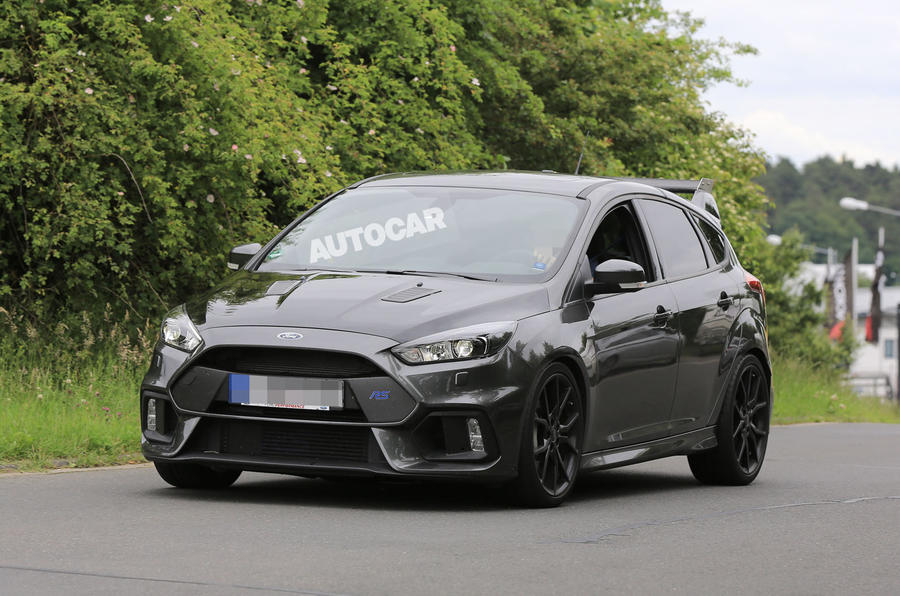 Without US sales, Autocar understands the super-hatch RS500 project is struggling to hit its internal project forecasts.

Ford is understood to have looked at an ‘RS500-lite’, built around solely European sales, but the smaller budget would have cut back on the project’s technical content. "Then it might dilute the RS brand," another source told Autocar.

Time is also pressing on a decision, with the window to get the RS500 into production narrowing as the current Focus heads towards run-out in late 2017.

Even the brilliant current RS, one of Autocar’s few five-star cars, took a huge effort to push through the strict Ford new-model project gateways.

Tyrone Johnson, the RS’s chief engineer, told Autocar in May that Ford’s product development chief Raj Nair made the difference and won over Ford bean-counters with persuasive arguments in the project's final meeting.

Nair may need to once again work his magic and intervene to get the RS500 into production.

Under the ‘One Ford’ product development program, all Ford models, including those from Ford Performance, must comply with global legal standards so they can be sold all over the globe.

Knock it into the weeds!!!

The rivals from Mercedes-Benz and Audi may give it some competition on a runway but when it comes to the corners I doubt they'll get close! Then there's the substantial price difference and added performance of the mountune and other aftermarket kits that would still bring it well under the price of the others. As for the vw it's a great car but not in the same league.
bowsersheepdog 29 October 2016

Cancelling one Ford is a start. Now if they'd just scrap the rest of the range as well we'd be spared the gruesome sight of the brand's appalling products altogether.
madmac 25 October 2016

What handicaps it is not the

What handicaps it is not the power, it is a good double clutch box which would help emissions, economy and performance.Stop whining, all you manual supporters! move on with progress!
As such I would never buy one over an A45 or RS3-both of which knock it into the weeds performance wise, not to mention superior fit and finish.Golf R is even better value, its a no brainer!
View all comments (6)