From £16,6458
We get our first taste of Ford's sporty 1.0-litre Fiesta on British roads
Open gallery
Close

ST-Line models are expected to represent a fifth of UK sales for the new Ford Fiesta. To hit that target, this halfway house between the regular car and full-blown ST will have to make a real impression.

Things looked good when we drove an ST-Line X for the first time on its European launch in June, but that was on smooth, sun-baked Spanish Tarmac. Now, we’re treading onto the undulating paths and carriageways around Wales’ Snowdonia National Park to more accurately gauge the model’s chances in Britain.

The ST-Line X, as you may have guessed, combines luxury features of the Titanium X with ST-Line design. It cherry-picks desirable features from both trims, including a dash-top-mounted 8.0in touchscreen (non-X models get 6.5in) featuring Apple CarPlay and Android Auto, part-leather sports seats and an ST-Line flat-bottomed steering wheel.

Outside, the car rolls on 17in wheels as standard, with 18in ones an option (and are fitted to this car). The bumpers are more aggressive in their design, while side skirts have been added to make the car look as though it’s sitting closer to the ground.

These changes, of course, come with the improvements added to the new Fiesta range. Compared with its predecessor, it has a vastly improved interior complete with a less cluttered dashboard and a higher-quality finish overall. The car itself is 71mm longer and 13mm wider, aiding interior space, and knee room in the back has grown by a modest 16mm.

Ford has pushed hard to boost the safety of the new Fiesta, so its B-pillars and doors have been bolstered for better side-impact protection, while a new Pedestrian Detection system that can work in the dark is offered. The ST-Line X gets additional driver assistance features such as a 4.2in TFT instrument cluster screen that displays traffic signs, as well as driver fatigue alert technology and rain-sensing wipers. 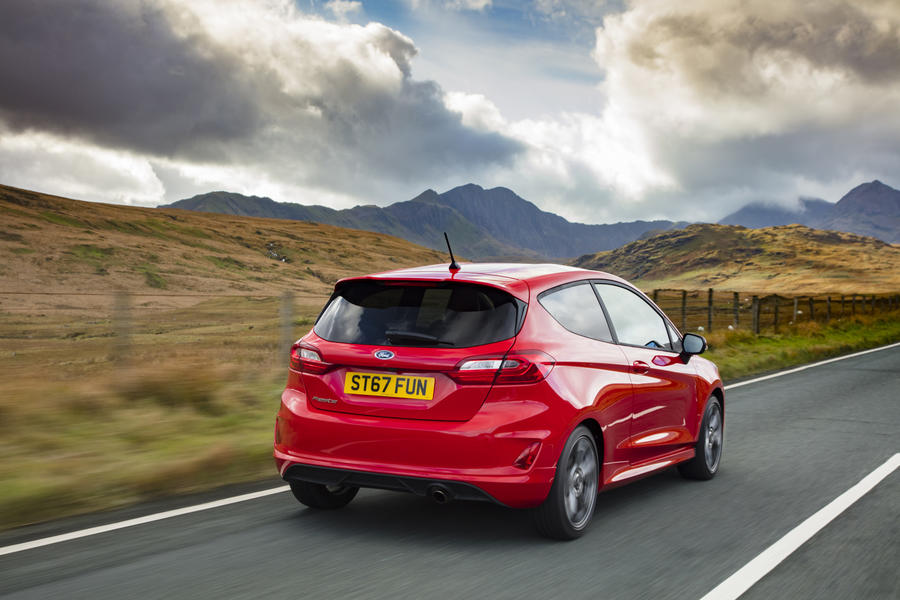 Ford has nailed the placement of the ST-Line within the Fiesta range, giving the model just enough sporting prowess to justify its badge but not to the detriment of its overall usability. Such is its flexibility that if you were to only glide about at urban pace, you’d be forgiven for thinking the ST-Line’s changes are only skin-deep.

Truth is, Ford has adjusted the damping to offer a slightly firmer ride than the regular car, but the impact is only really noticeable on cracked surfaces, when the wheels patter along with more enthusiasm. The car still soaks up bumps and ruts well, but it’s slightly more composed during quick direction changes with fewer degrees of lean through corners.

Our ST-Line X, equipped with the 123bhp version of Ford’s effervescent three-cylinder Ecoboost engine, feels gutsier than the numbers suggest. Admittedly, this is partly because of the sharp throttle it’s controlled by, but it's also due to genuinely solid mid-range grunt. It doesn’t rev quite as freely to the redline as the more potent 138bhp three-cylinder, preferring to be rotated a few hundred rpm lower, but it’s by no means strangled if you do explore the upper realms of the rev counter.

The six-speed manual gearbox is rewarding to use, with a quick throw and tight gate making it especially enjoyable to keep the engine turning over in its most energetic rev range. That the engine responds sharply to heel-and-toe inputs makes the process even more pleasurable.

With a humble 123bhp, progress along a road is respectable rather than rapid in the ST-Line X. The car rewards a smooth, flowing driving style that keeps up momentum rather than the more frenetic style spicier hatchbacks can encourage, although the rear can still be mobilised if the car is hustled into a corner on the brakes. Ford claims brake-activated torque vectoring boosts the car’s agility, although – and this is a compliment - you aren’t conscious of it working from behind the wheel and instead the car feels naturally nimble. Standard-fit Michelin Pilot Sport 4 tyres do a fine job of maximising the bite onto Tarmac.

On a longer run, the road noise generated by our car’s 18in wheels may become tiresome, with the volume so high that it blocks out the tone of the engine almost entirely. The car does, however, feel secure and confident at high speed, reducing the rate of driver fatigue. Inside, the ST-Line X is an easy place to get comfortable, although larger drivers may find the well-bolstered chairs a little snug. Our car’s optional (£300) B&O Play premium surround system is worth mentioning for its excellent depth and clarity, boosting the overall passenger experience. 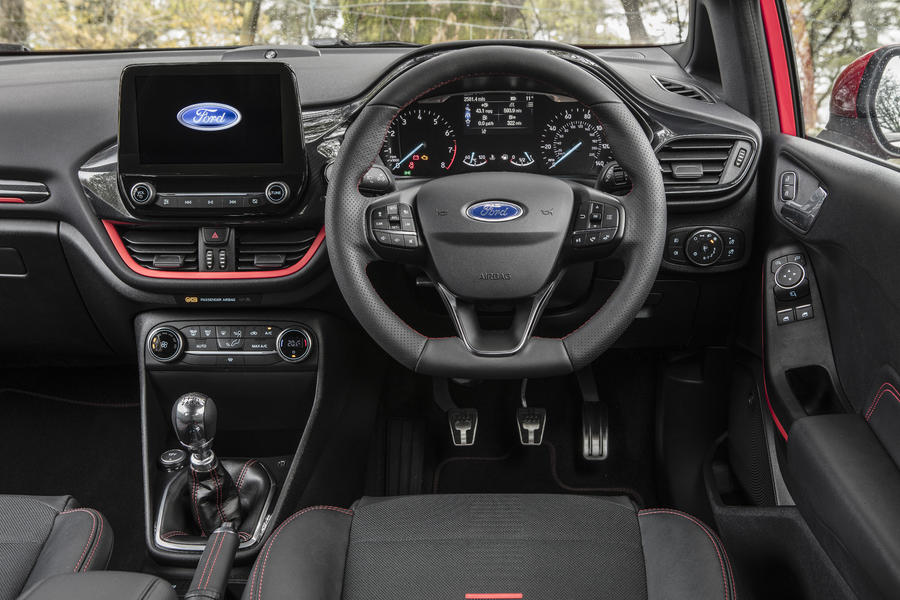 The ST-Line X is a broadly talented car that will strongly appeal to those after a fun, well-equipped hatchback with respectable economy. While it lacks the cabin and boot space of class leaders, it scores points for its vastly improved interior and the segment’s most engaging chassis.

The fact that a hatch with a 1.0-litre engine can be examined in a similar vein to a true driver’s car shows how capable the ST-Line is, but in X form the model’s £18,445 starting price places it alongside the impressive Seat Ibiza 1.4 FR, which has a four-cylinder engine producing 148bhp.

The fine chassis and more premium interior help to justify the higher price tag this high-spec model requires. But that does leave it in dangerous territory alongside an extremely competent list of rivals. 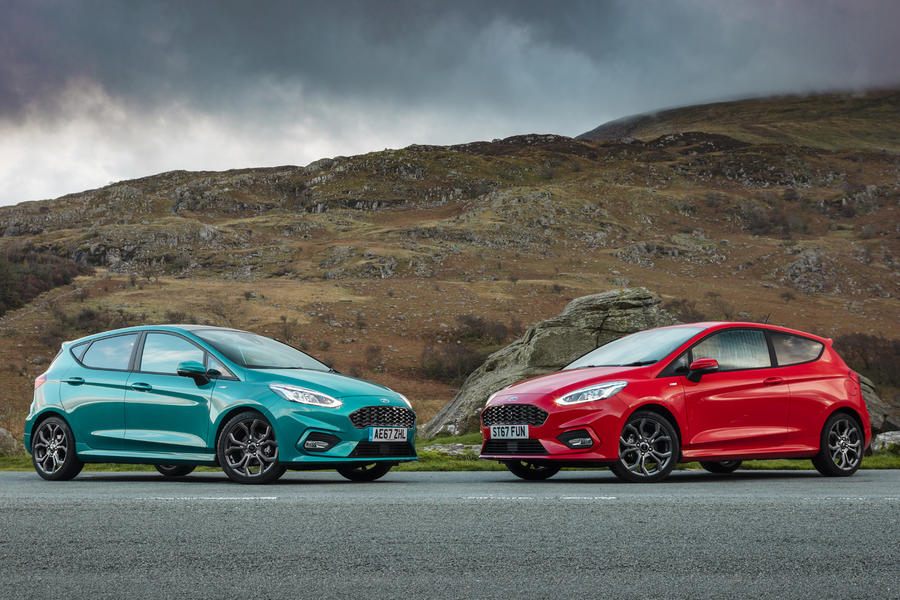 On the 5 door that is

On the 5 door that is

This, or a lighter, faster Suzuki Swift Sport for £4000 less?