Porsche says the new Cayenne SUV borrows heavily from the 911. We took a ride to find out if that’s true
Open gallery
Close

It’s been a remarkable run of success for the Porsche Cayenne.

Having stunned sports car purists when it was introduced in 2002, the first-generation model racked up more than 270,000 sales in six years – setting Porsche on a path to record profitability, all-time sales highs and long-term financial security.

Then that as eclipsed by the second-generation Cayenne, which has just ceased production. Launched in 2008, more than 500,000 were sold globally, making it the most successful Porsche model yet and firmly establishing Porsche in key markets such as China. 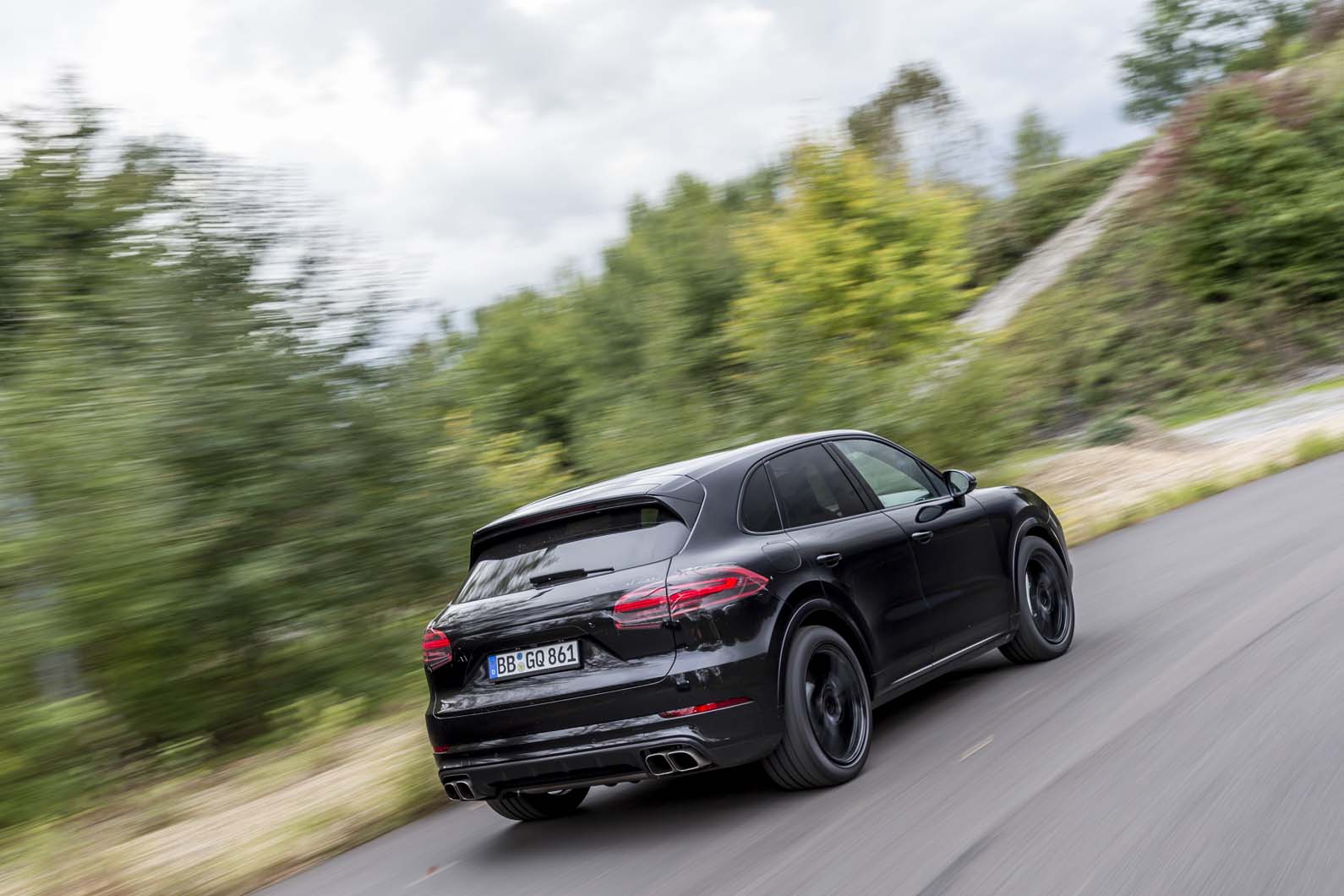 So there are big expectations on the third generation, which goes on sale in 2018 – especially given that it faces increased competition from luxury SUV rivals including the Audi Q7, Bentley Bentayga, BMW X5, Jaguar F-Pace, Mercedes-Benz GLE and Range Rover Sport.

Porsche CEO Oliver Blume is bullish about the new car, saying: “The new Cayenne is a Porsche by all means and with no compromises. Never before has it borrowed so much from the 911.” 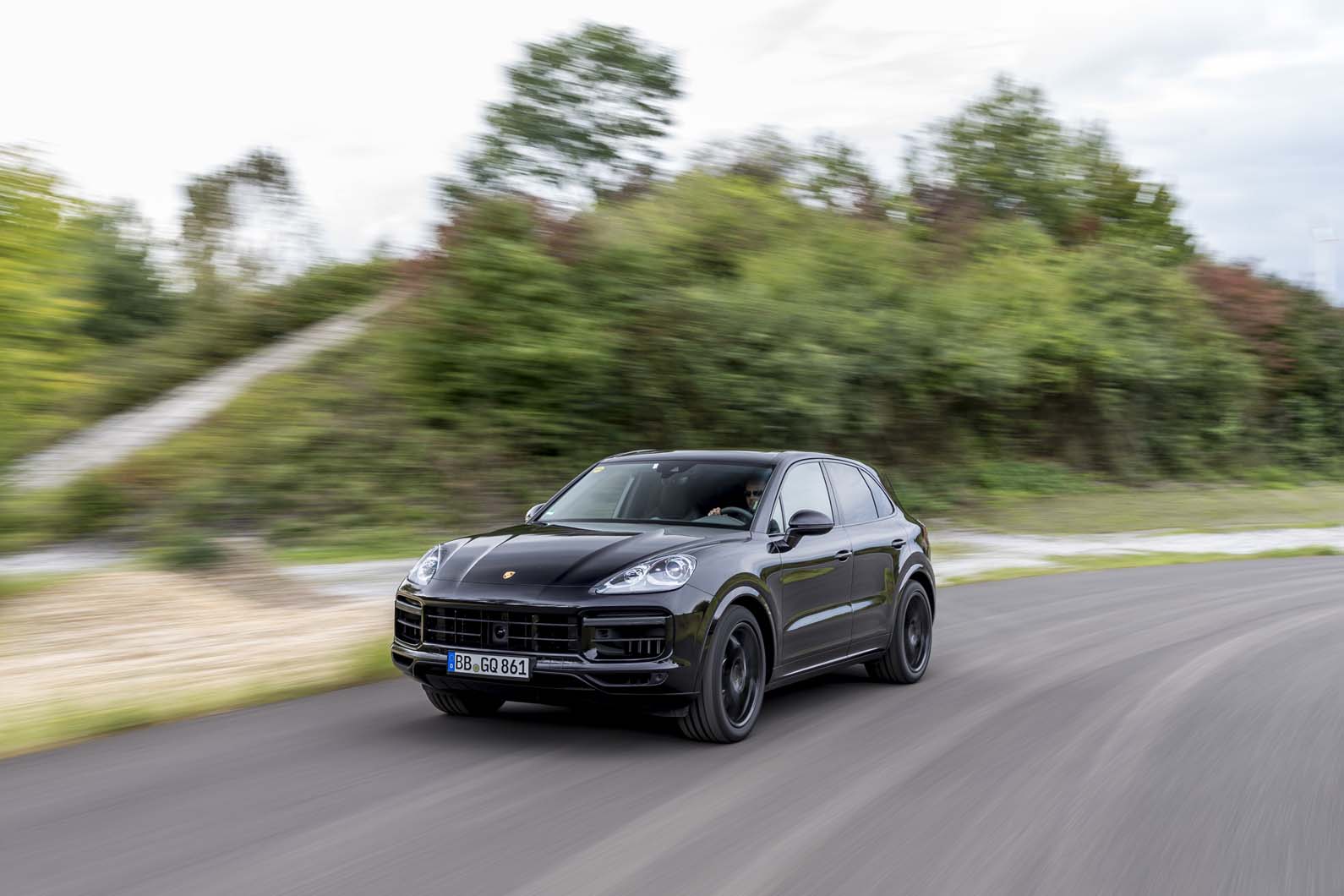 The Cayenne S receives a more powerful 2.9-litre turbo V6. With 434bhp and 405lb ft, it packs 20bhp more as the naturally aspirated 3.6-litre V6 engine it replaces while matching its torque. Porsche claims 0-62mph in 5.2sec (4.9sec with the Sport Chrono Package) and a top speed of 165mph, improvements of 0.3sec and 4mph.

We were invited to experience the new Cayenne first hand with a passenger run around an advanced driver training facility near Düsseldorf in Germany.

Seen up close, it actually looks slightly smaller than its predecessor. 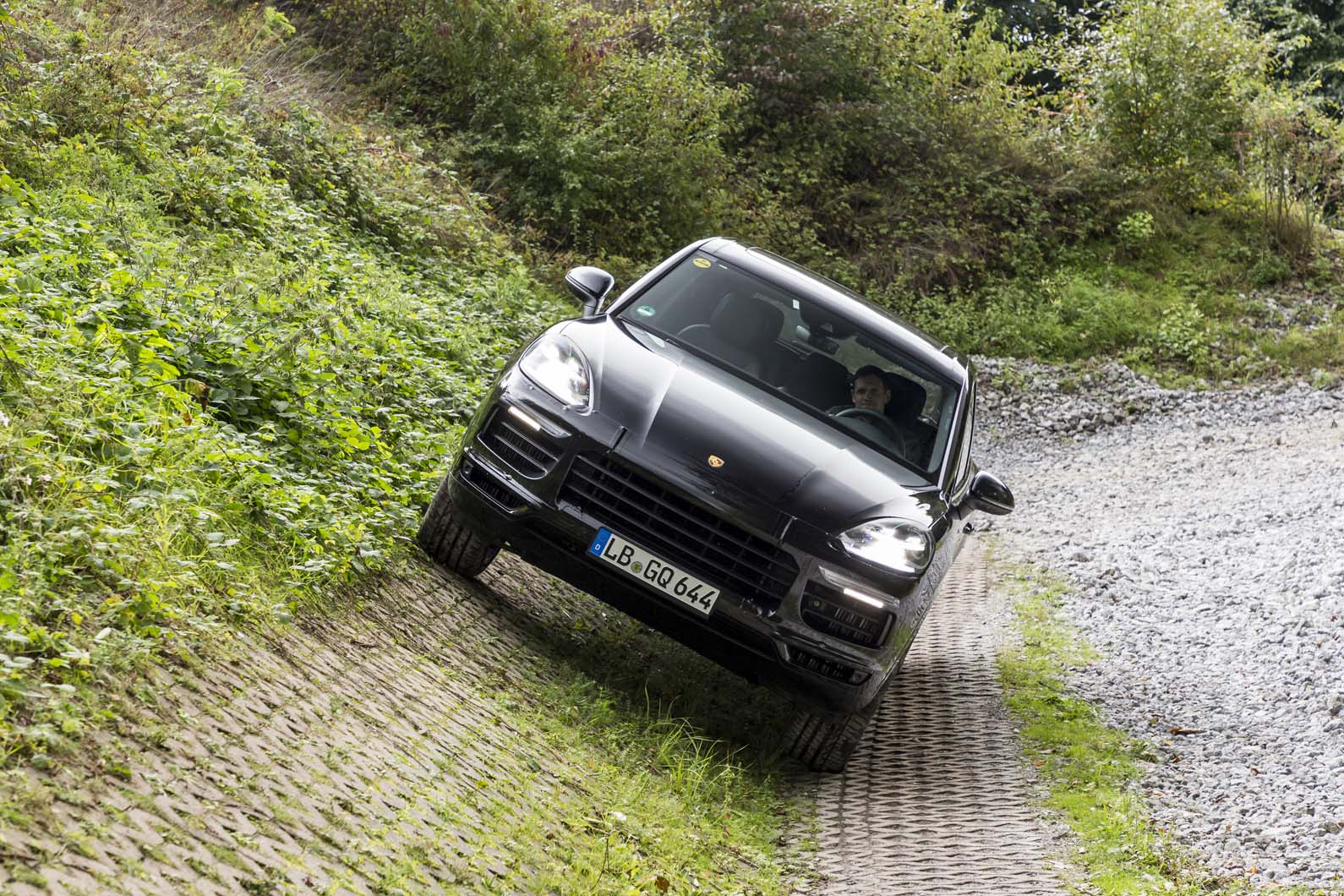 Given the huge success enjoyed by the second-generation model, Porsche has been reticent to make big changes to the styling. Its design team, headed by Michael Mauer, has reinterpreted the detailing and refined the silhouette to give the new model a slightly more sloping roofline and more sporting overall shape, although the differences are not immediately apparent from the front.

At the rear, new slim line tail-lights and a full-width horizontal light bar are a clear visual break with the old model. Larger wheel houses have also led to an increase in the size of the wheels by an inch in each respective model; the top-of-the-line Turbo now wears 21in rims.

Taking inspiration from its sports cars, Porsche has provided the new Cayenne with a series of active aerodynamic developments, including vertical and horizontally mounted louvers within all of the front air intakes. They open and close depending on the cooling requirement of the engine - a move that claims to significantly improve the drag co-efficient. 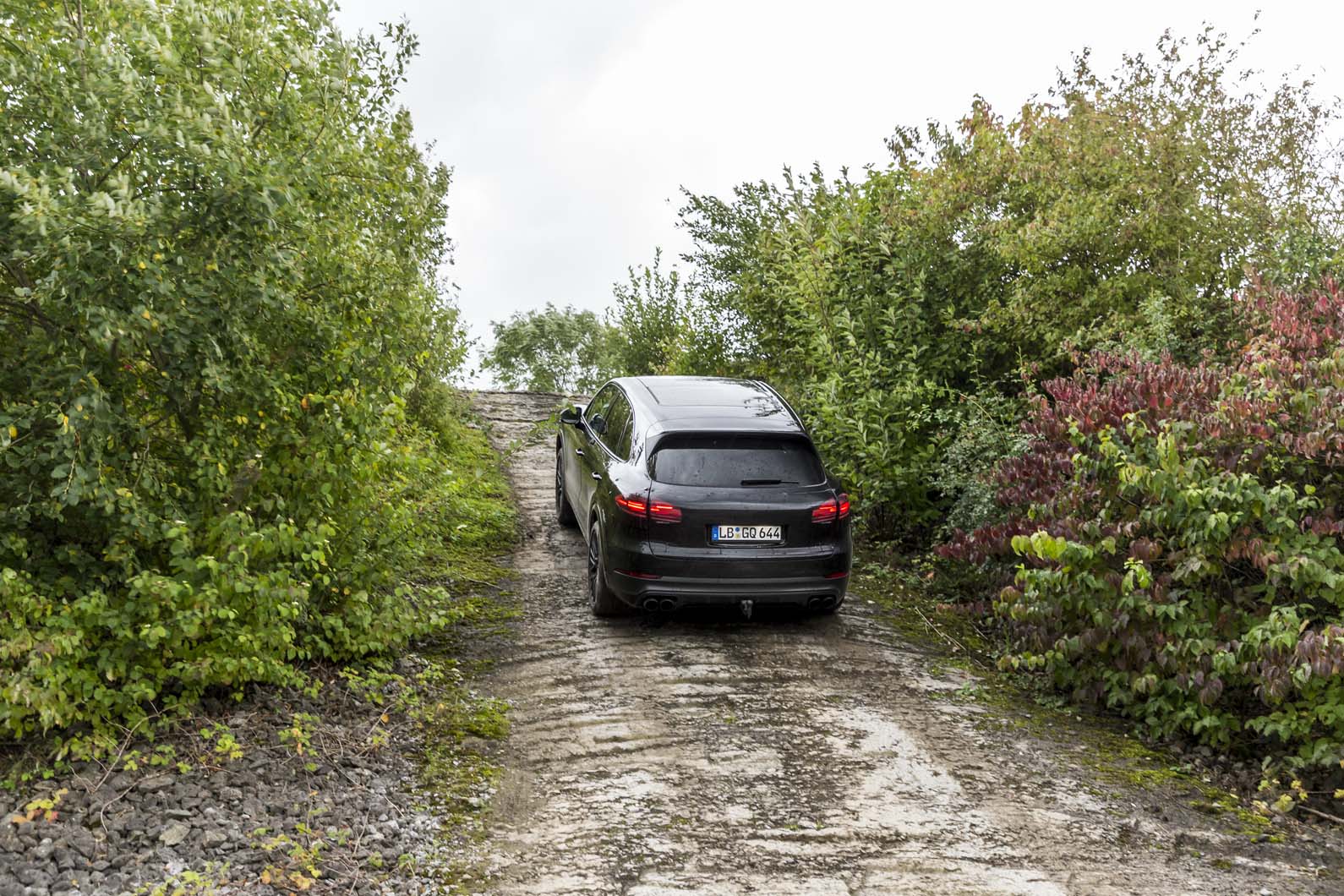 The Turbo also employs a prominent extendable spoiler element atop the tailgate at the rear. Some 46mm longer than the fixed element used by the Cayenne and Cayenne S, it deploys at 12.6deg when the driver chooses the Sport Plus driving mode and 19.9deg at speeds above 100mph. It also acts as an air brake, tilting to an angle of 28.2deg when the brakes are applied between 106mph and 168mph to help provide added stability and a claimed reduction in stopping distances.

The Cayenne’s revamped body combines a variety of metals, with aluminium now accounting for 47%  of the total. Engineers say it is 35.5kg lighter and 20% more rigid than the old car.

The chassis has been reworked with a new four-link set-up replacing the previous double wishbone arrangement up front and a new multi-link system at the rear. Porsche has also fitted different-sized tyres front and rear for the first time; the Turbo wears standard 285/40 and 315/35 profile rubber respectively.

Equipped with a 48-volt electrical system, the car also features a new three-chamber air suspension offering up to six levels of ground clearance, including a load setting, and an electronically operated anti-roll function in place of the hydraulically operated system of old. The wheelbase remains the same as before at 2895mm, but the Turbo's  front track is 26mm wider, with the rear track reduced by 5mm to 1670mm. 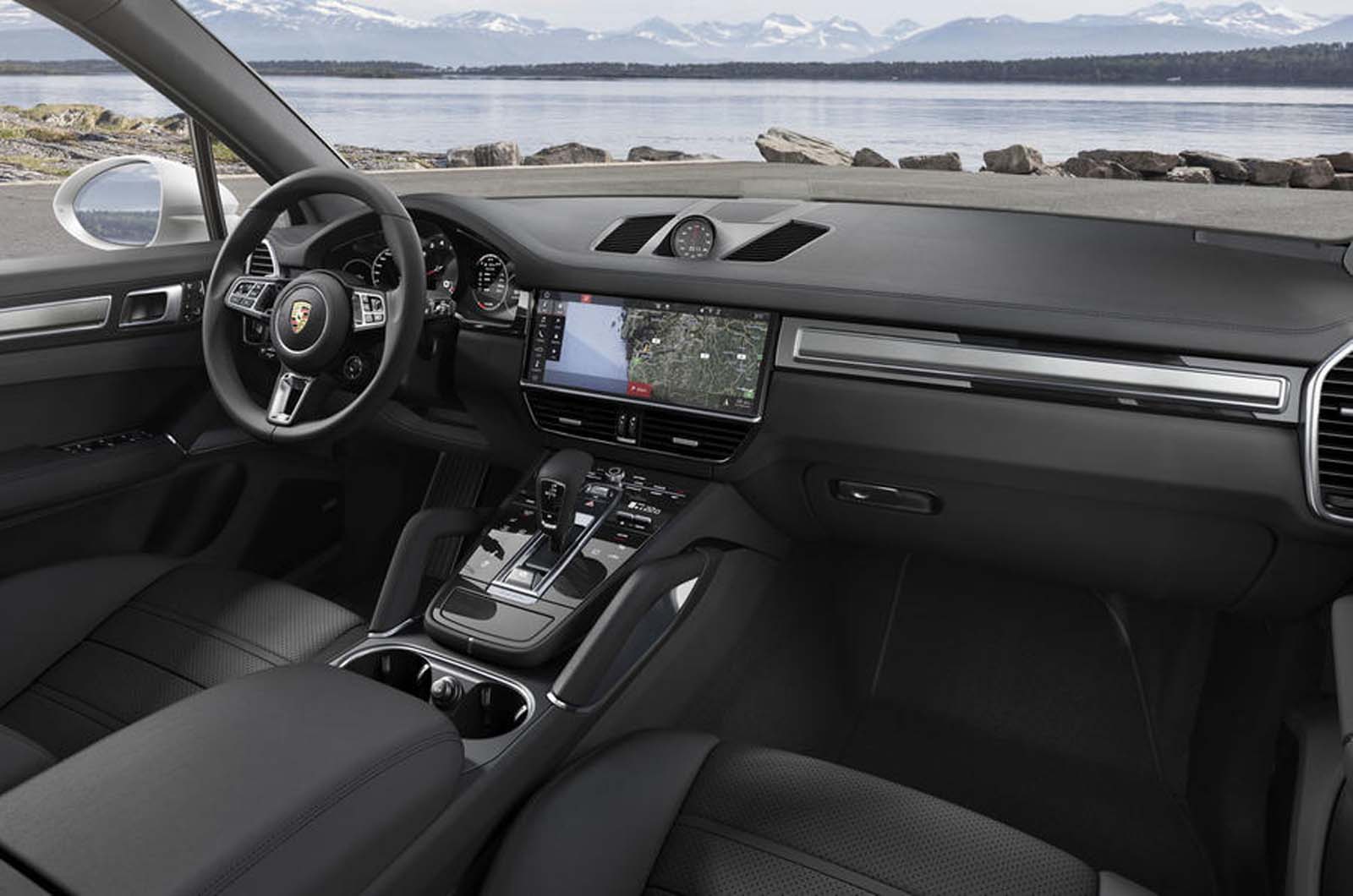 Another development is a new brake system called the Porsche Surface Coated Brake. It employs tungsten carbide-coated steel discs measuring 415mm by 40mm up front and 365mm by 28mm at the rear, in combination with giant 10-piston and four-piston calipers respectively. Standard on the Cayenne Turbo and an option on the Cayenne and Cayenne S, the discs are claimed to provide greater resistance to fade than the standard steel discs and a 90% reduction in brake dust.

Together with the 33.5kg reduction in body weight, Porsche has pared a further 31.5kg from other areas of the new Cayenne, leading to an overall reduction of up to 65kg. The Turbo weighs 2175kg, 50kg less than before, giving it a power-to-weight ratio of 249bhp per tonne.

Inside, the new Cayenne shares much with the second-generation Panamera. The dashboard features a combination of traditional analogue and digital instruments, as well as classic and more contemporary touch-sensitive controls with haptic feedback. There’s also a new range of multi-function steering wheels, including one in the Turbo that mimics that used in the earlier 918 Spyder. In keeping with the more sporting slant applied to the new model, the Turbo also receives new sport seats featuring integrated headrests. 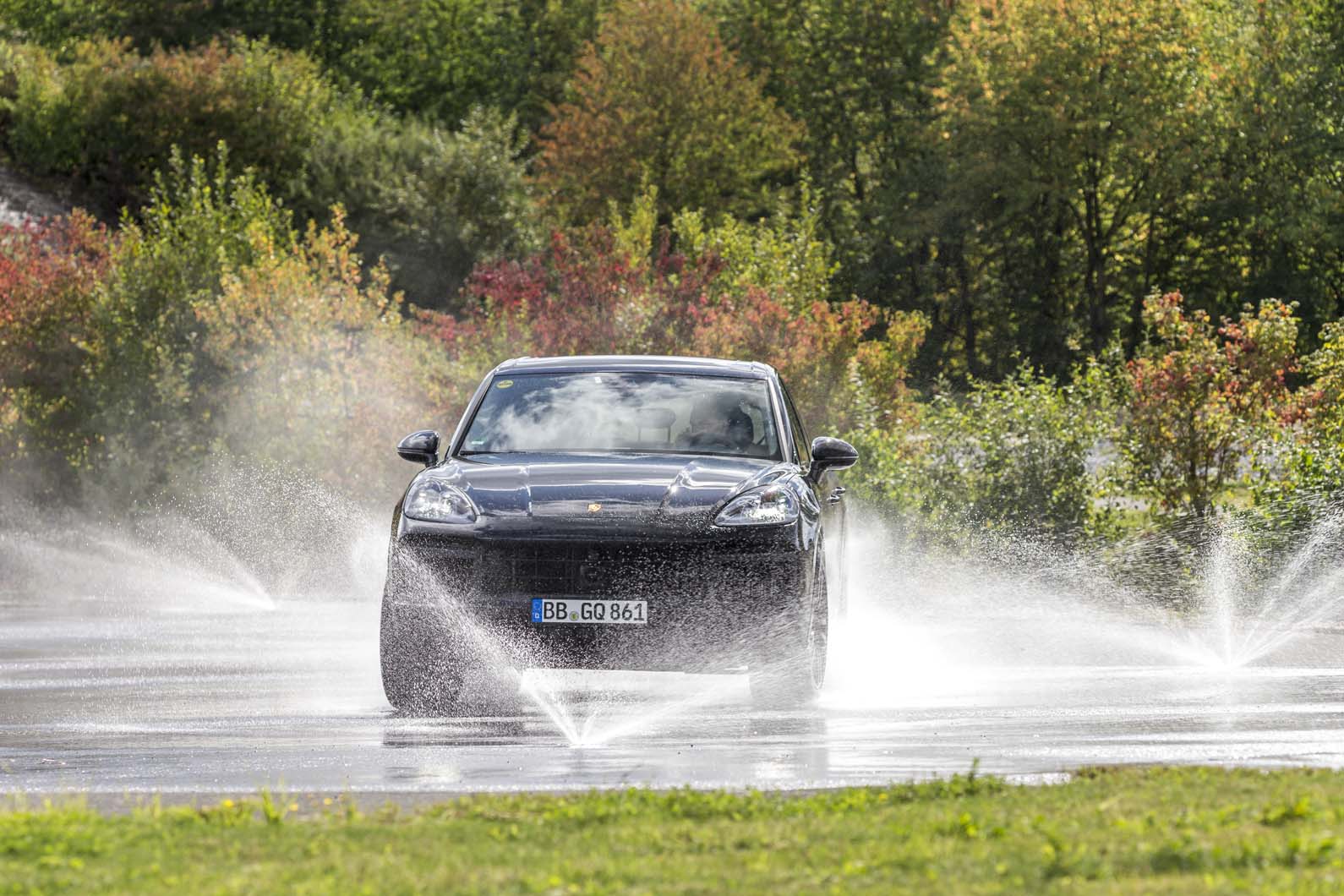 In a bid to cut down on clutter, Porsche has grouped many of the dashboard functions within a prominent 12.3in high-definition touch-sensitive infotainment display. Boot space has improved by 100 litres to 770 litres overall, when the rear seatback is set in its most upright position.

Porsche laid on two driving exercises for our first ride in the new Cayenne. The first was an off-road course in a Cayenne S equipped with standard steel suspension. Setting off in Gravel mode, it handled the track with real authority, powering along at a good clip of speed and with impressive traction despite a bumpy surface strewn with loose round stones.

The next obstacle was more challenging, consisting of two steep climbs tackled in Rocks mode. The first section of the incline was dispatched with real conviction given the obvious lack of grip offered by the slippery surface and standard road tyres worn by the prototype, the reworked multi-plate clutch four-wheel-drive system apportioning drive in varying degrees and with deft efficiency to either the front or rear to boost traction and ensure our momentum remained strong.

The second part of the climb looked trickier, but the Cayenne S handled it well, cresting the hill and traversing an off-camber section that immediately followed it without any obvious difficulty. Clearly, the skill of our driver played an integral role in ensuring we didn’t grind to a halt when traction was momentarily challenged, but the new Porsche appears to have a lot to offer those keen to get away from the bitumen. 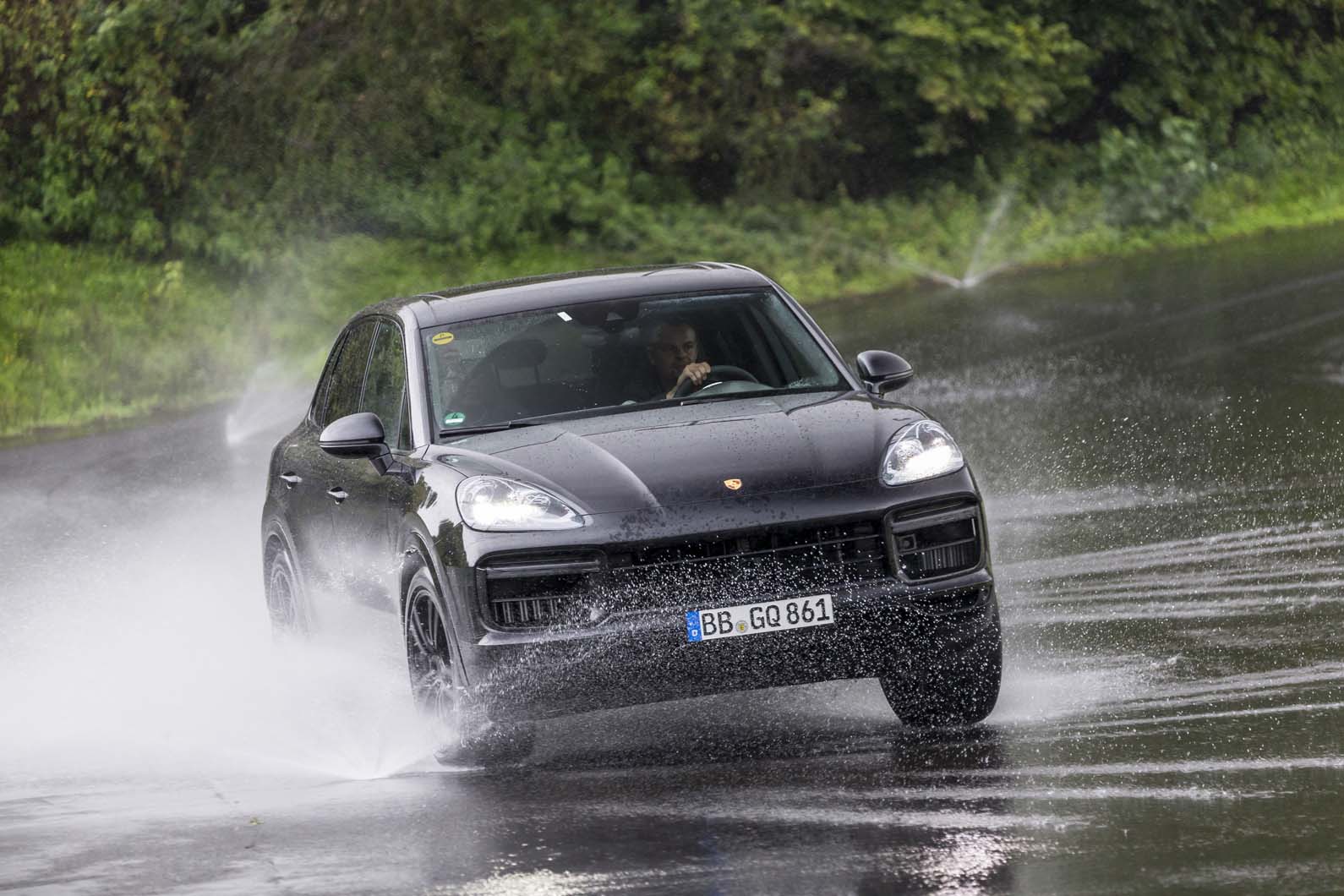 With a standard hill descent control system working to ensure a constant speed and limit slip, the prototype dispatched a long and steep descent with great control and sure-footedness. Despite a clear focus on improving on-road performance, it is clear the Cayenne has lost none of its off-road prowess.

We then tried a Turbo prototype running a standard three-chamber air suspension, the new electronic anti-roll system and rear-wheel steering. The first lap of the handling course was spent in Normal mode. It didn’t take long to conclude that the Turbo is a very different proposition to the Cayenne S. Its new engine may be down by 810cm3 in capacity compared with the unit used by its predecessor, but it has lost nothing in overall effectiveness. On a loaded throttle in lower gears, the resulting acceleration is spectacular.

On the second lap, our driver switched to Sport Plus mode, showing how much the inclusion of four-wheel steering has enhanced the new model’s overall agility. Turn-in appears sharp, with very little steering lock required to see the new Porsche scythe towards the apex.

Cresting a rise at speed, we plunged down into a long left-hand corner, leading on to a semi-circular skid pan covered in a good deal of standing water. We hit the damp surface at more than 80mph, sending the tail of the new Porsche out in a wild but progressive slide that, with a good deal of opposite lock, continued all the way to where the water ended and beyond.

Continuing around the lap, we were taken by how effective the anti-roll system serves to suppress body movements. Even at high cornering speeds, it works to keeps the body flat and the grip strong.

It was only a brief run but, from the passenger seat, the new Cayenne S proved it can handle off-road conditions with all the dexterity of its predecessor, and the new Cayenne Turbo clearly operates on a higher-performance plane than the model it replaces. Clearly, it will take a proper drive before we can deliver any binding conclusions – but it appears the competition have something to worry about.

.....are from the previous generation aren't they? Or does the full width rear light bar not make it onto the Turbo?

"The Cayenne S receives a more powerful 2.9-litre turbo V6. With 434bhp and 405lb ft, it packs 20bhp more as the naturally aspirated 3.6-litre V6 engine it replaces while matching its torque."

Err, wasn't the old 3.6-litre V6 also turbocharged? It's obvious that a NA engine could not produce that much torque.