BACK TO ALL NEWS
Currently reading: First drive: Volkswagen Atlas Tanoak pick-up concept
UP NEXT
All-new Skoda Fabia due in 2021 with new platform, improved tech

Officially, the Volkswagen Atlas Tanoak concept is intended to show the versatility of the firm’s MQB platform, how the highly versatile architecture can be used for models ranging from the Polo up to a mid-sized pick-up.

But the dual cab concept also hints at how Volkswagen intends to further raise its presence in the North American market and the increasingly lucrative pick-up segment. That means taking on a raft of rough-and-tumble rivals including the Toyota Tacoma, Ford Ranger and Chevrolet Colorado.

If it goes into production, the Atlas Tanoak would be an addition to VW’s pick-up line above the rugged ladder frame Amarok. It would also be part of an eventual three-model Atlas line-up, including the seven-seat SUV and more sporting Atlas Cross Sport, also shown in concept form at the New York show. 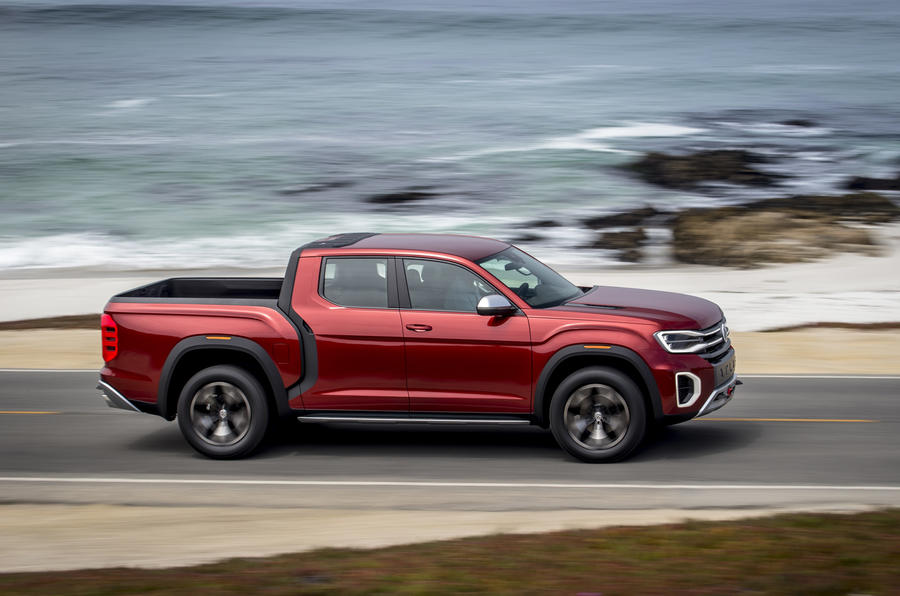 The powertrain and performance of the Atlas Tanoak

Less a tradesman’s workhorse and more a lifestyle-orientated pick-up, the Tanoak has been designed to offer a range of different engines, including turbocharged 2.0-litre four-cylinder petrol and diesel units as well as the naturally aspirated 3.6-litre V6 petrol powerplant featured in the concept with 276bhp and 258lb ft of torque.

The transversely mounted engine channels its drive to all four wheels through an eight-speed torque-converter-equipped automatic gearbox, providing both high and low-range gearing via an Active Control function.

Performance figures haven’t been confirms for the concept, but Volkswagen suggests the Tanoak can achieve 0-60mph in 8.5sec, with a limited top speed of 118mph.

A claimed payload of 750kg – which could rise to 1050kg with a strengthened rear axle – would put the Tanoak at the top of its class in terms of load carrying capacity. 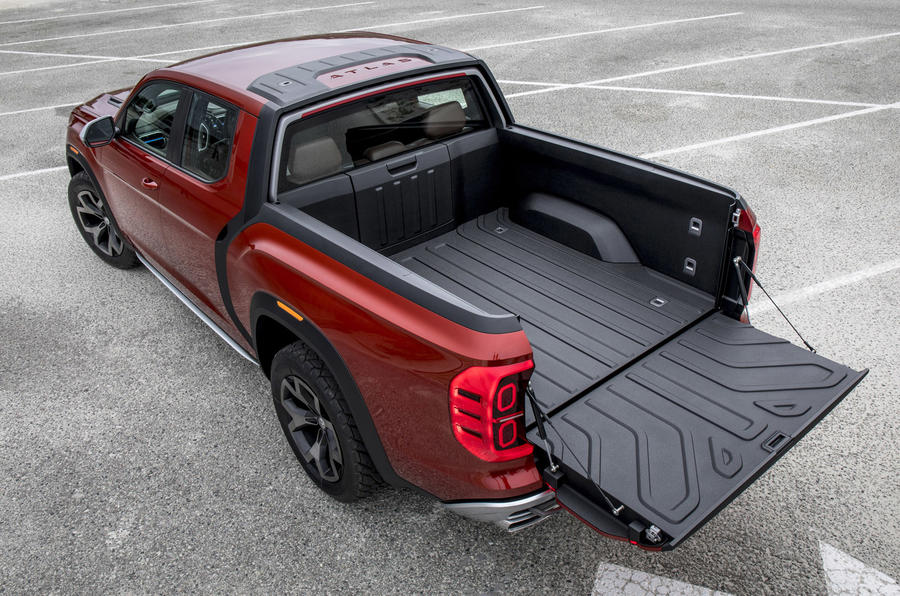 Unlike many one-off concepts, it’s clear the Tanoak has true production relevance. The thoroughness and detailing evident within its exterior design, the impressive interior, and convincing properties of its mechanical package make it clear that Volkswagen is taking the new pick-up very seriously indeed. It already feels showroom ready – and it’s a more inviting machine to spend time in than the Amarok.

While the Tanoak’s leather-lined driver’s seat is high, with a commanding view of the road, you feel you sit in it and not on it. The raised shoulder line provides an agreeably encapsulated feel, yet there’s sufficient visibility to each corner to provide confidence when driving.

The interior builds on the Atlas SUV, with digital instruments and Volkswagen’s latest touchscreen infotainment system among key additions. The Tanoak provides seating for five, although the rear middle seat lacks for legroom due to the transmission tunnel. But it matches the likes of the Tacoma and Ranger for versatility and ease of use.

Volkswagen says a decision on whether to produce the Tanoak has yet to be made, but on the public road it’s clear a good amount of engineering has gone into the concept, and all the key elements appear in place.

The V6 engine propelled the pick-up to a limited 30mph with the sort of rich smoothness you’d expect of a production model. We don’t go any faster over the remaining three miles, but that was enough to get a good feel for the Tanoak’s on-road character.

The ride is firm, but with the same amount of spring travel as the Atlas and on 20-inch wheels, it traverses bumps in the road without the bone-jarring characteristics of many concepts.

The Tanoak handles and corners well, although at limited speed we barely touched on its dynamic ability. 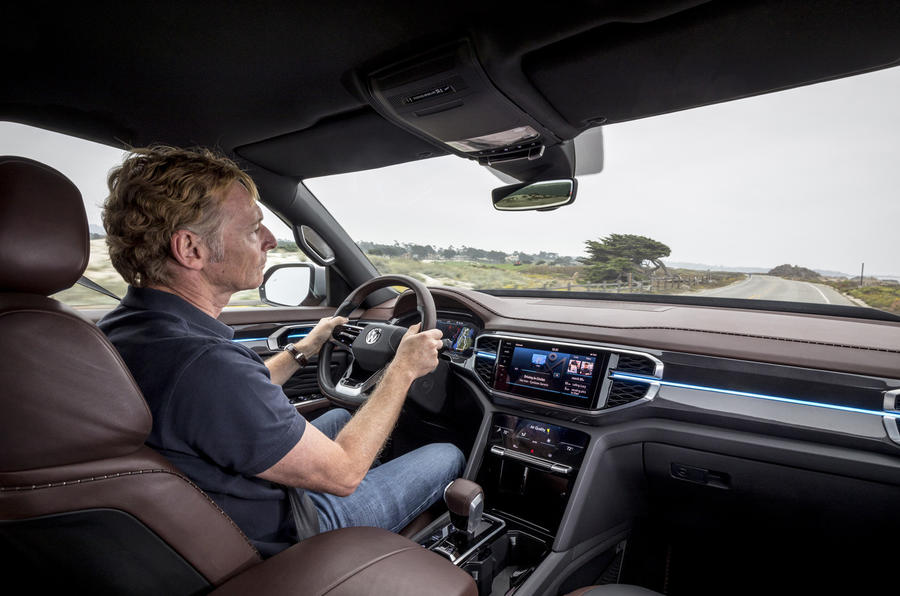 Will Volkswagen put the Atlas Tanoak into production?

It’s clear the Tanoak has the potential and integral qualities to be a contender in the mid-size pick-up market: it feels remarkably mature and sorted.

There’s still a lot of work to be done before the Tanoak goes into production. The main decision in determining the business case for the pick-up is whether to stick with the monocoque construction of the concept. That gives it rigidity and refinement, but using a more rugged ladder frame chassis, as its main rivals do, would offer greater payoad and towing capacity.

Still, if a business case can be made to put the Atlas Tanoak into production, early indications are that it could be a success. 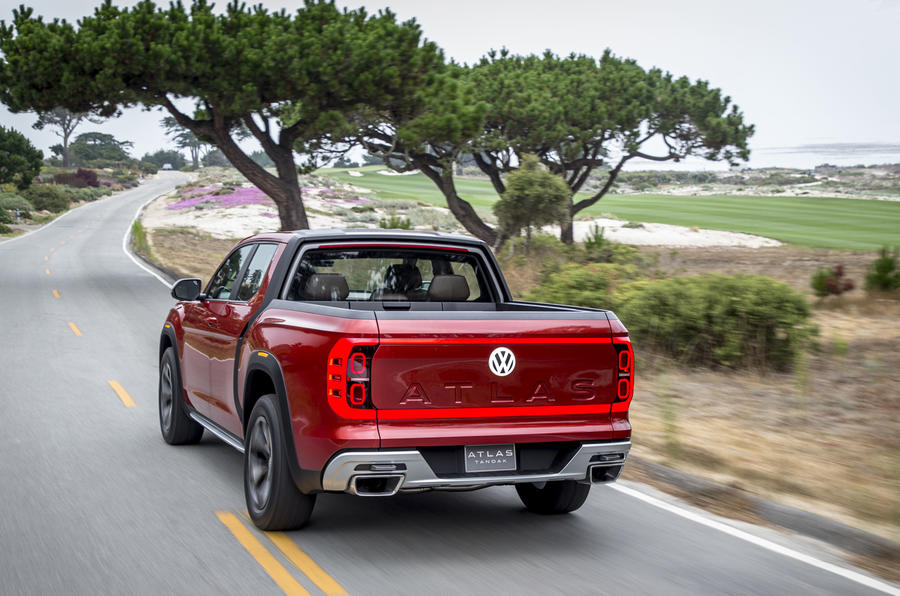 Why Volkswagen doesn't sell the Amatok in the USA

Volkswagen Atlas could come to Europe

Looks great, we will all have to go and buy trucks

Yes when the politicians have finished the vendeta on ic engines you will either have to have a three ton electric suv , 2.5 ton hybrid and lug around an excess of kilos most of the time ,or say sod it I will just have a bloody large truck with a jolly large petrol or diesel engine.

26 August 2018
I like the look of this and would have one if it looked like this in production form, I like the amorok but it looks a little 'underwheeled' for my liking.

Less a tradesman’s workhorse and more a lifestyle-orientated

Really sais it all what it's about. That it's a pickup that isn't quite a pickup - as most so called SUV's aren't really quite much of SUV's. Dreaming that by thinning out the recipe, like was done with SUV's - more are going to buy. Would that actually work however!

A remarkable bit of kit, it

27 August 2018
A remarkable bit of kit, it really shows what a class leading piece of engineering their modular matrix is. It's a shame it's been overshadowed by other events these past couple of years. It deserves better press.

A remarkable bit of kit, it really shows what a class leading piece of engineering their modular matrix is.

MQB is beginng to show its age. Polo's are pretty heavy these days compared with more modern rivals. It's actually the separate chassis that makes true picks more versatile as you can ditch the standard tray and have custom fit-outs over the rear wheels. Since this is bigger than the Amarok, expect it to share the smaller cars ladder-frame set-up if its to be taken at all seriously.