BACK TO ALL NEWS
Currently reading: First drive: LEVC TX taxi on the streets of London
UP NEXT
Lamborghini to launch four-seat EV crossover and electric Urus

The new LEVC TX taxi will start accepting fare-paying passengers in London today, the latest step in a series of trials ahead of the first deliveries of the electrified cab early next year – and Autocar has had an early taste of the car on the streets of the capital.

After an extensive development programme, a small fleet of production-spec TX cabs has been undergoing evaluation by Transport for London (TfL)-licensed black cab drivers, giving a small number of passengers free rides as part of that process. Those cabs will now be used on regular routes, giving LEVC a final chance to gather feedback and hone the design while production ramps up at its new Coventry facility.

Autocar has previously had a passenger ride on London roads in a prototype cab and driven a similar development machine on rural roads near LEVC’s new factory. We’ve now had our first taste of an effectively final-spec machine – in full classic black livery – on London roads.

The first thing to note is that our short test route, which loops out of LEVC’s North London showroom, is far from ideal for testing the dynamic properties of a car. On a busy weekday afternoon, our run down Euston Road past King's Cross, past Regents Park and round the tight streets of Little Venice offers plenty of traffic and virtually no flowing corners. Yet conversely, those are ideal conditions in which to evaluate the new TX, since it’s the sort of roads that the bulk of the London-bound examples will spend the vast bulk of their time traversing.

That said, on first sight, the prospect of driving a TX in London traffic is, to a non-taxi driver, at least, a little intimidating: it’s far bulkier than the old diesel-powered TX4 it’s replacing. The two machines share a very similar footprint – London taxi rules dictate a maximum width, as well as that famous 8.5-metre turning circle. The TX is marginally higher than its predecessor and, at 4860mm, around 280mm longer, and it certainly fills that space far more comprehensively than its predecessor. The large slab sides hint at both the far more spacious interior – for both driver and passengers – and the enhanced safety features.

London cab vs Uber vs Sat Nav: which is best? 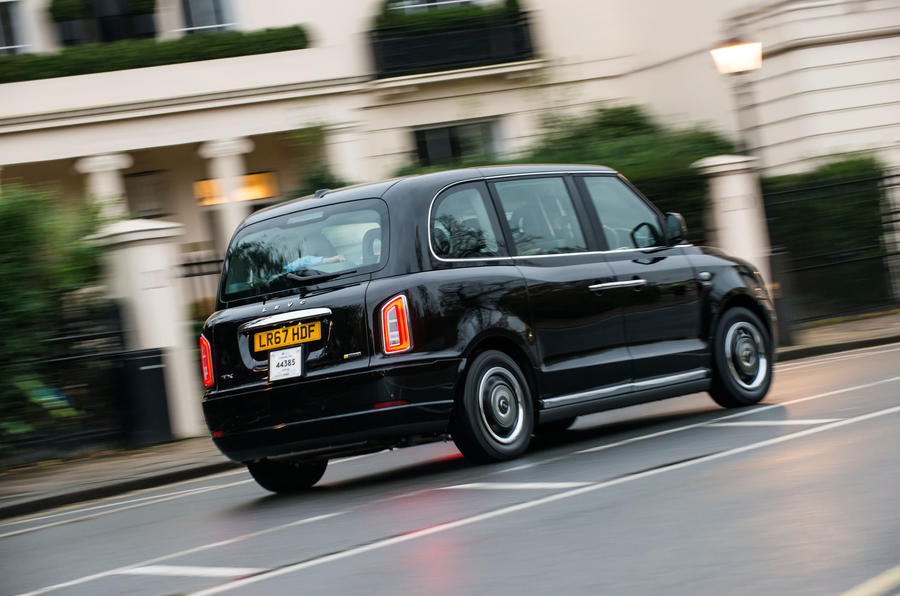 In the front, the seating position is unusually elevated, sitting higher and more upright than virtually any SUV you’ll find on the market. That’s in part because the whole interior is raised due to the 330kg, 30kWh battery that runs under the floor of the interior cabin, and which gives the TX the capability to run 80 miles on pure electric power. The seating position also helps give a commanding visibility of the road ahead.

The driver’s seat won’t be mistaken for the ultimate in high-end luxury, but it’s not been designed for that: it’s more office chair than snug armchair, designed to be comfortable for prolonged use, and made from durable, long-lasting materials. It’s been designed to remain comfortable for the eight hours a day most cab drivers spend behind the wheel. Undoubtedly, it’s a massive step forward from the TX4 cab, whose seat was so uncomfortable that the bulk of drivers chose to rip it out and fit an aftermarket alternate (Recaro seats are apparently very popular).

The rest of the driver’s cabin follows that office-style feel: there’s plenty of useful cubbies for storage (whether the required paperwork, snacks or the paper) and limited controls, which are laid out clearly and logically. Many of the controls are derived from fellow Geely brand Volvo, which is undoubtedly a good thing. There’s a digital dashboard that’s easy to programme, and a big touchscreen display that accesses functions such as the sat-nav (this car will be sold in overseas markets, where cab drivers don't have to do The Knowledge), car information screen and infotainment. Entertainment options include USB ports, smartphone connectivity and a DAB radio. That last point is important, apparently: LEVC's research shows that cabbies care far more about having a good radio than smartphone connectivity.

We’ve previously spent an extended period in the back of a TX taxi on London’s streets, certainly enough to gain a good impression of the extra space and comfort of the new machine. That definitely hasn’t changed; the difference between the production-spec and the prototype we were previously in is all about the polish. That sense of space, enhanced by the large panoramic glass roof, makes it feel a step up in luxury over the old TX4; but the hard-wearing, practical materials look like they could cope with the worst a London Friday night could throw (up) at them.

Any sense of intimidation at driving a bulky taxi on tight, congested city streets quickly evaporates once you get moving. The power-assisted steering is precise, confident and certainly not as floaty as you might expect, given how easy it is to access that prodigiously tight turning circle (as a result of which the wheels turn 60deg, compared to 38deg in the average SUV).

Once you can switch your brain on to its potential, that 8.5-metre turning circle is a joy to experience – allowing you to pull off seemingly impossible manoeuvres with ease. It was certainly appreciated by our photographer: the ease of turning the TX so easily vastly reduced the amount of time he had to spend roadside waiting for it to drive past for exterior shots.

As well as that turning circle, the confident steering handles the TX’s 2230kg kerbweight with ease, and you can feel the work on the cab’s aluminium chassis to balance the extra weight needed for the electric motor, batteries and 1.5-litre petrol engine, which helps give the TX a total range of around 400 miles. The slow speeds of our test route, incidentally, meant we didn’t use the range-extending petrol unit at all.

The TX also picks up well, as you might expect from a car with a 147bhp electric motor. The acceleration is smooth rather than hair-raising which, again, makes it fit for purpose – it makes stop/start traffic easy to handle, even the auto stop/start function wasn’t as smooth as we’ve experienced elsewhere. But it also has enough pep to propel you quickly forward when the need arises, such as when a gap in traffic allows you to reach the glorious escape of a taxi lane.

A controller on the centre console controls how much energy the TX tries to regenerate when slowing, with three settings. In its most extreme, the cab slows notably as soon as you lift off the throttle; with practice, it would be possible to drive in this mode with minimal use of the brakes. 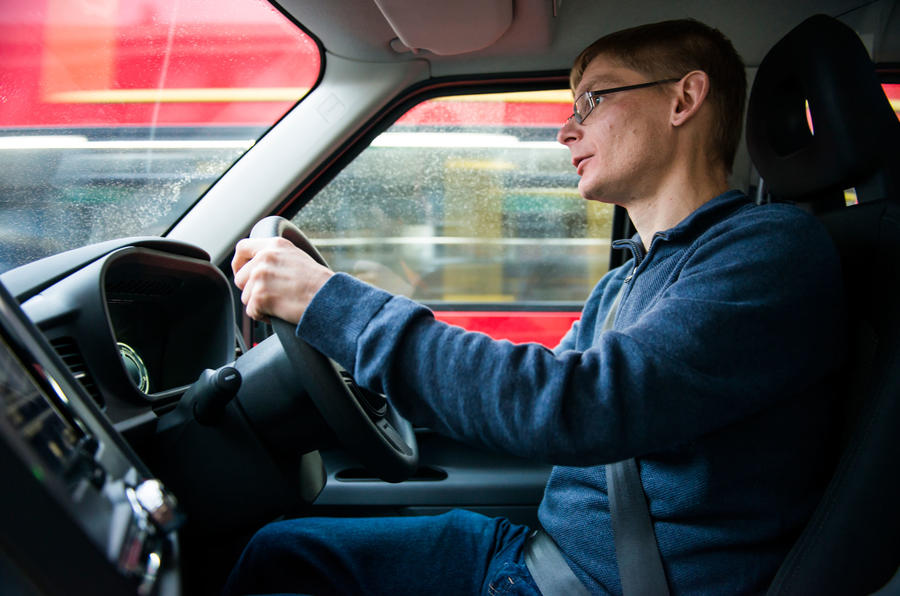 Of course, the most notable performance trait about electric-only running is how quiet the cab is. When mired in heavy traffic, it makes the TX an oasis of calm amid the swirling hustle of London life. It’s amazingly peaceful while sat in traffic, insulating you from the honking horns and trundling engines around you. That relaxing environment should prove a boon for drivers who spend all day in such conditions and will also be a real selling point for passengers. So quiet is the TX that, for most of the run, I didn’t need the in-car microphone to talk to those in the back.

Both those in the back and the front will also appreciate the TX’s ride, especially given that the springs and dampers must be working overtime to ensure the hefty machine remains stable and poised over London’s many bumps and potholes.

Of course, any true judgement of the TX will need to be made once we can spend an extended period in it, both with more running on city roads and in a location that will enable us to try to petrol engine – and get somewhere close to the limited top speed of 80mph (set by TfL regulations).

The TX costs £55,559 (including a £7500 grant), but most cab drivers are likely to lease theirs at a set price of £177 per week over five years. That's a £10 increase on the lease price of the TX4, but the average driver could save £100 per week in fuel costs. Not to mention that service intervals are every 25,000 miles, rather than 12,000. It should make a compelling business case for cab drivers seeking an upgrade.

It will, incidentally, be possible to buy a TX privately – Stephen Fry is a proud owner of a TX4, for example. As a spacious, alternate city car, it could be worth considering, although the price will likely put off many. Plus, it's worth noting that private owners don't get all the advantages that come with running a taxi in London; without a TfL licence, they won't be allowed in bus lanes, for example.

For passengers, the TX will cost exactly the same to ride in as the existing TX4 (and with six rather than five seats, could actually prove cheaper for larger groups). That means, for no more money, you’re likely to have a far more comfortable and relaxing journey. That still means a TX is likely to command a premium over other London transport options, such as a bus, tube, or – and whisper this if you're near a cab driver – Uber. But the space and comfort of the new cab, along with the USP of that panoramic roof, put the TX some way towards justifying that premium in a way its diesel predecessor never could.

First ride: LEVC TX prototype on the streets of London

I'm glad to see Bentley evolving and creating an excellent urban rival to the model X. It is made by Bentley isn't it? No?

LEVC are to be congratulated for this fine update of the iconic London Taxi,it looks both dignified & purposeful I hope that the vehicle will soon be seen in other UK cities as well

LEVC are to be congratulated for this fine update of the iconic London Taxi,it looks both dignified & purposeful I hope that the vehicle will soon be seen in other UK cities as well