BACK TO ALL NEWS
Currently reading: First drive: 2021 Mercedes-Benz EQA 250 prototype
UP NEXT
Lamborghini to launch four-seat EV crossover and electric Urus

Mercedes has turned its accomplished GLA crossover into an EV to take on the Volkswagen ID 3. Is this a recipe for success?
Open gallery
Close

The logic behind Mercedes-Benz’s decision to lift the various petrol, diesel and plug-in hybrid drivetrains out of the engine bay of the GLA and replace them with an electric motor to create the new EQA is easy enough to understand.

Without a dedicated EV platform to underpin the most affordable of its EQ-branded models, the German manufacturer really didn’t have much choice other than to rely on existing hardware if it was to make good on its promise of delivering an electric compact SUV priced to rival the BMW i3 and Volkswagen ID 3. The creation of a unique structure, like those used by its key competitors, would have taken years and cost billions.

It’s not an ideal situation. The GLA’s MFA platform was conceived to support electrification but only in plug-in hybrid form, not a fully electric powertrain. As such, its high-strength steel and aluminium structure required a good deal of re-engineering – most notably to house the 66kWh lithium ion battery, which is mounted within the rear section of a raised floor, including beneath the rear seats.

However, using the GLA as a base did allow Mercedes to produce the EQA alongside its popular compact crossover at its plant in Rastatt, Germany, as well as at others, including in Beijing, China, for some handsome economies of scale.

It also paves the way for a second model off a lengthened version of the same structure, in the form of the upcoming EQB – a pure electric version of the slightly larger GLB. Together, they’re among six new electric models planned to be launched by Mercedes before 2023. 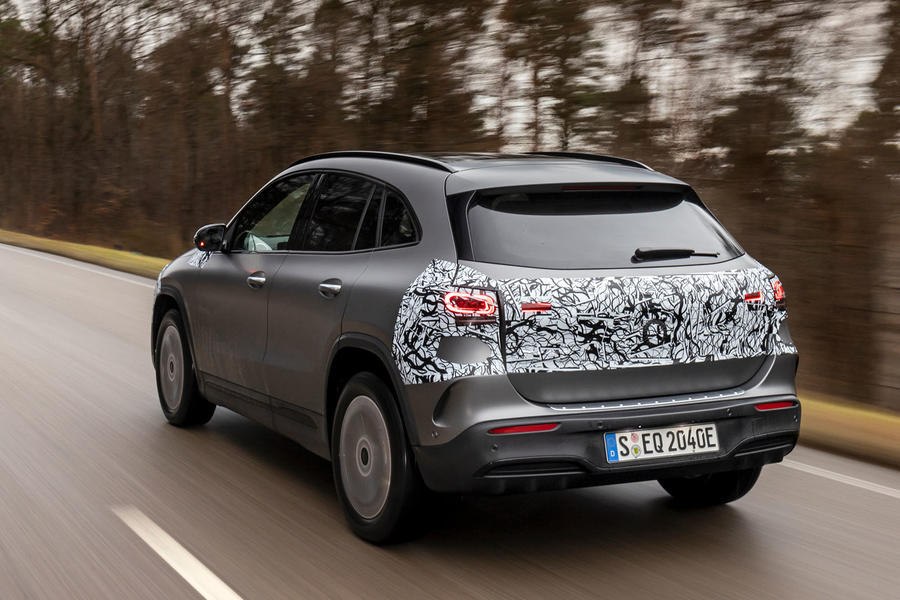 Before all that, we’ve been invited to drive the EQA in some decidedly cold and wintery conditions in Germany. Our lightly disguised example belongs to a fleet of preproduction prototypes that are conducting durability testing ahead of UK deliveries commencing in mid-2021. It’s described as being ‘customer-ready’ and wears an AMG Line styling package, which is one of three planned.

Can this volume-selling EV make an impact while relying on an adapted platform?

Keen observers will immediately recognise the similarities between the EQA and its ICE sibling; they share the same steel bodyshell and bumpers. The electric model does at least receive its own unique, blanked-off grille and some other mildly altered details, although on the whole the connection is clear.

Inside, there’s a lightly reworked interior from the GLA, albeit with EQ-themed instrument and infotainment graphics. It’s high-quality in here and offers a comfortable driving position, with all the modern conveniences and safety features one could wish for in any class of car.

If there is any caveat, it’s the rear-seat accommodation, due to that raised rear floor. There’s no loss of overall leg room compared with the GLA, but because the rear bench is set comparatively low, your knees end up quite high. There’s also a transmission-tunnel-like ridge running down the cabin’s centre.

It’s a similar story with the boot, so the EQA fails to deliver the same impressive 481-litre capacity as the GLA. However, it does at least retain the 40:20:40-split folding rear seats, enabling longer items to be stowed.

The prototype driven here is an EQA 250 – the model that Mercedes will rely on for at least the first year of sales. Its ZF-produced 188bhp asynchronous electric motor is mounted up front, where it drives the front wheels through a fixed-ratio gearbox. Other derivatives are set to follow, including a performance-focused model from AMG with two motors and thus four-wheel drive.

There’s a familiar process to setting this new electric crossover into motion, because you find the same starter-button and column-mounted gear lever found in just about all automatic Mercedes cars. The electric driveline isn’t as silent as it is in the larger EQC SUV; there’s a subdued whirr on start-up and a high-pitch whine as you set off, but it’s immediately calmer and quieter than any of the GLA’s engines.

Once underway, the EQA initially feels quite brisk. There’s terrific response and a seamless nature to the operation of its motor on a loaded throttle. At around 60mph, the accelerative potency begins to diminish, owing to a combination of increasing rolling resistance and aerodynamic drag, but it remains punchy enough for authoritative overtaking and swift progress.

Mercedes hasn’t issued any official performance claims for the EQA just yet, but I would be surprised if it didn’t dip below the 7.0sec for the run to 62mph. Despite its obvious weight and comparatively modest reserves, it always feels strong and willing.

However, arguably more impressive than the instant performance of the drivetrain is its energy regeneration system, which is controlled via steering wheel-mounted paddles. Depending on the driving conditions, you can choose between four different modes to alter the braking characteristics when you step off the accelerator pedal. 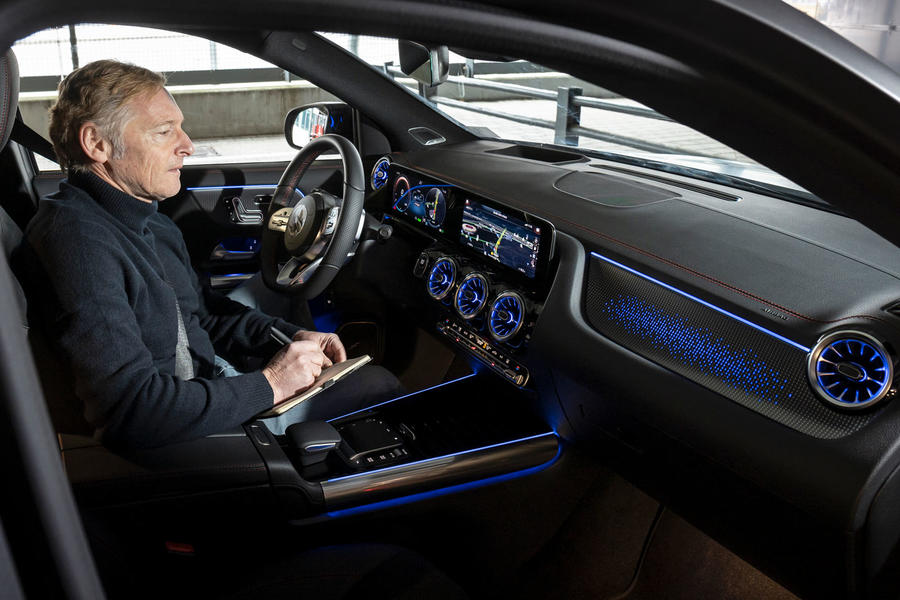 In the most aggressive setting, D--, the EQA pulls up quite abruptly as the regeneration system harvests kinetic energy and stows it in the battery, while in the most hands-off setting, D+, it coasts without any perceptible braking to take advantage of its momentum. The former proves quite handy in city driving, where you rarely need to press the brakes yourself, except when coming to a complete stop. The latter, on the other hand, is best suited at cruising speeds, allowing the EQA to roll on uninterrupted for extraordinary distances.

Its nippy character and ability to pull up smartly of its own accord make the EQA well suited to urban driving. That said, because it retains the same steering geometry as the GLA, the EV fails to offer quite the same sense of manoeuvrability as some of its rivals, and its turning circle is more than a metre wider than that of the ID 3.

Out of town, Mercedes’ efforts to make the EQA more aerodynamically efficient than the GLA have paid dividends. There is some slight wind buffeting around the door mirrors at motorway speeds, although the overriding sound in this prototype is the distant roar of its 19in winter tyres. As you would expect, refinement is clearly a strong suit.

Yet for most people, it will be the range that proves just as important. Mercedes says the EQA will be capable of more than 249 miles on a single charge, although it isn’t going into any detail just yet. To put this into perspective, early ID 3 models fitted with a 77kWh battery have a range of up to 341 miles. Rumours abound of a long-range EQA capable of more than 300 miles, but it isn’t likely to be part of the launch line-up. The lack of information extends to charging performance. We know the EQA will support both 11kW AC and 100kW DC charging, but there’s no specific information on timings yet.

As for dynamism, with its raised ride height and standard front-wheel drive, expectations of the EQA’s sporting traits should be checked. The suspension uses the same combination of MacPherson struts up front and multi-link arrangement at the rear as the GLA, only adapted to cope with the increased mass brought on by the EQA’s battery. The springs and adaptive dampers have been retuned and the anti-roll bars beefed up. As a result, the EQA grips gamely when pushed hard, hiding its weight well with precise steering, fluid changes of direction and nicely controlled body movements. Overall, it’s reassuringly surefooted but lacks the immediacy of lower-slung rivals.

As for ride comfort, the latest generation of electric cars have progressed in this area, and the EQA is a shining example. Despite its considerable weight, this chassis displays excellent compliance in Comfort mode. Perhaps it isn’t quite as smooth-riding as the GLA over broken bitumen at lower speeds, but vertical body movements are quickly and softly quelled over long-wave intrusions at higher speeds, giving the EQA an appealing calm nature. To preserve this quality, my advice would be to avoid the larger wheel sizes when specifying your EQA. 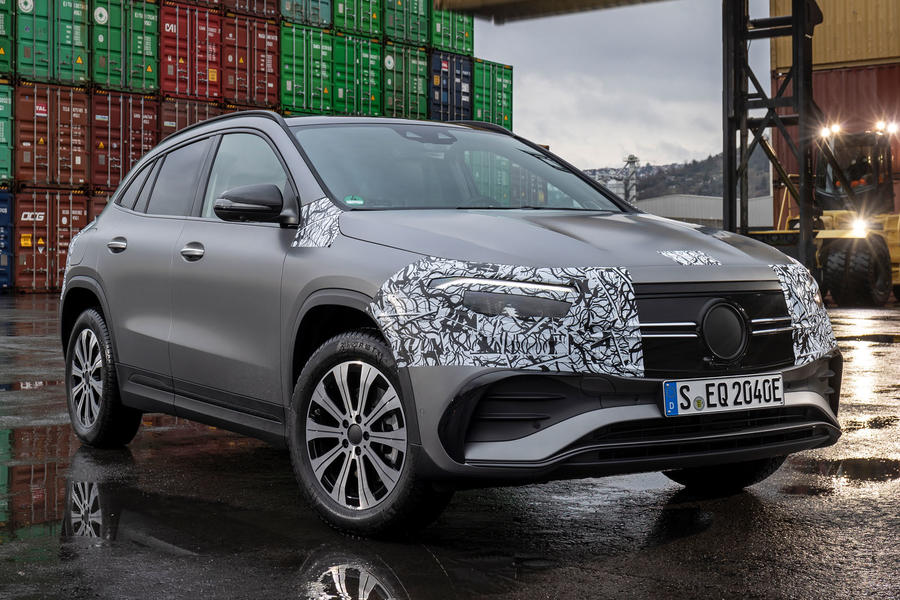 There are still questions to be answered, but at this early stage, we would recommend placing the EQA on your shortlist of electric cars to consider – if its projected price tag £37,000 suits your budget.

Our brief prototype drive suggested it has the performance, comfort, refinement and quality to leave a mark against the competition, and if projections hold true, it should also offer worthwhile range – the sort that could make it more than just an attractive commuter car.

Packaging is the chief concern here, as Mercedes’ adaptation of an existing ICE platform leaves the EQA short on rear space compared with some rivals. To fully realise its potential in the junior-EV sphere, the firm will need to remedy this.

Log in or register to post comments
NavalReserve 19 January 2021
Today's news of a breakthrough in battery charging technology allowing 200 miles range to be added in 10 minutes is going to stop a lot of people buying an EV any time soon.

This is a tall car, so why can't they raise the rear seat if the floor is higher? Sitting with your kness raised so much sounds uncomfortable to me.

You've got to hand it to Mercedes for offering this new EQA which is based on a 9 year old platform and design, the one that underpinned the previous A Class and GLA. And which follows on from the EQC which is based on what will soon be replaced C Class and GLC rather than the new models. Premium prices for previous generation engineering from a premium company who still continue to try to cut corners. Their dark days of the late1990s hasn't been fully shaken off.

You've got to hand it to Mercedes for offering this new EQA which is based on a 9 year old platform and design, the one that underpinned the previous A Class and GLA. And which follows on from the EQC which is based on what will soon be replaced C Class and GLC rather than the new models. Premium prices for previous generation engineering from a premium company who still continue to try to cut corners. Their dark days of the late1990s hasn't been fully shaken off.

This new EQA looks very similar to the current GLA inside but platform wise the article says MFA and not the new MFA2 which underpins the latest A Class, GLA and GLB. I agree with the EQC, a current generation Mercedes which was spun off from essentially a previous gen design and platform. Either way Mercedes does seem to be lagging behind massively in the EV game by still not having bespoke platforms for volume EVs or not having a ICE platform that doesn't require substantial changes for an EV model, which is even more bizarre if transpires that the EQA is based on the latest MFA2 platform which is only a couple of years old or so. If for example, VW Group, PSA and BMW can easily deliver flexible platforms which also cater for EVs without huge changes, surely this wasn't beyond Mercedes' ability to do the same? Ironic really that the 1st A Class was designed so that it could be petrol, diesel and electric powered and yet Merc's smallest EV is potentially based on a platform that wasn't.