BACK TO ALL NEWS
Currently reading: First drive: 2020 Toyota Yaris prototype
UP NEXT
New Lotus electric sports car to use Britishvolt batteries

Behind the least convincing camouflage we’ve ever seen is the fourth-generation Toyota Yaris. No, it isn’t the GR-Four (it has too many doors for that), but the far more real-world relevant hybrid model that will make up the vast majority of sales.

Of course, with everyone jumping on the electrified bandwagon of late, Toyota must be feeling jolly smug with itself. After all, it has been making New 2020 hybrid versions of the Yaris since 2012.

But this isn’t some heavily facelifted version of the third-gen car; it’s an all-new model from the ground up. For a start, its platform has been switched to a version of the TNGA architecture that underpins the Corolla, bringing a 37% increase in torsional rigidity. Width is up by 50mm, as is the wheelbase, but overall length is down by 5mm. Height has been reduced as well, bringing about a 21mm lower seating position and a 12mm drop in the centre of gravity.

Those changes are all attempts to boost agility and driver appeal, but would have been pointless with the sluggish old hybrid system. Thankfully, there’s a new 1.5-litre three-cylinder Atkinson cycle engine under the bonnet. This long-stroke engine is paired with two electric motors and a lighter, more powerful Li-ion battery pack to give 16% more power, yet brings a 20% reduction in CO2 emissions.

With a combined output of 114bhp, 0-62mph is reduced by two seconds to a perfectly respectable 10.3sec, and the power boost also means the new car’s engine doesn't have to be worked as hard, making it far quieter while delivering useful acceleration. Most of the time, you’ll find the Yaris a quiet partner; its distant engine thrum is more subdued than you'll hear in many rivals. You still occasionally find the revs soaring and staying there – a trait that comes courtesy of the hybrid's CVT automatic gearbox – but the motor doesn’t sound quite so tortured when this happens. 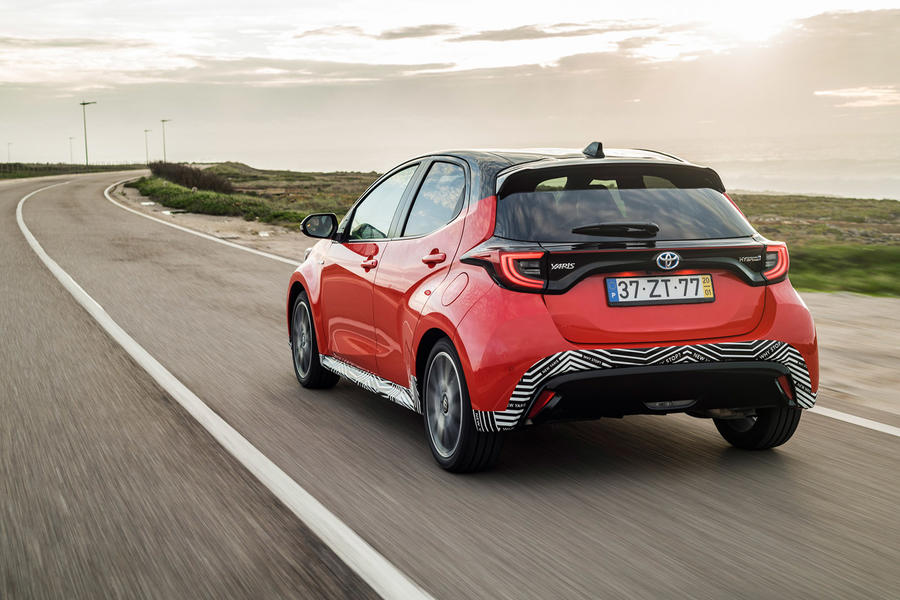 Not that the engine is running much of the time, at least in urban environments. Indeed, Toyota claims that the Yaris can run on electricity 80% of the time, something we can entirely believe. The handover between power sources is virtually imperceptible; there's only a bit of engine noise and a faint vibration through the steering wheel to tell you that the Yaris is sipping petrol. And ‘sipping’ is the right word; on our two-hour test route, which included towns, motorways and even some challenging mountain passes, we averaged 61.4mpg, according to the trip computer.

That economy is particularly impressive when you consider that the Yaris is now far happier to be driven briskly on a winding road. Its steering might not be particularly talkative, but it’s naturally weighted and very precise, making it easy to place on the road, while body lean is far less noticeable. Grip is decent and the handling is surefooted yet agile. Sure, you’d have more fun in

As for space, the 286-litre boot is on the small side, although most versions will get a two-level boot floor for added flexibility. Space inside is better, with room for a 6ft-plus adult to sit behind another in the driving seat.

There’s no doubt that the Yaris has taken a big step forwards, improving on its already excellent economy and emissions whilst being noticeably better to drive. It might not have the Fiesta’s sparkle in the bends, but it certainly handles far more tidily, while its powertrain is much less frustrating.

Just how competitive it is will boil down to pricing and specifications, plus how vigorously Toyota will be applying the final layer of polish. But although it’s too early to give a definitive verdict, expect the Yaris to climb the supermini rankings.

It almost looks good, but

It almost looks good, but theres something wrong with the proportions at the back, maybe its those stupid black roof n pillars, sadly I fear it isnt.

Finally Toyota has realised that with hybrids you need to DOWNSIZE the engine, why did it take them 20 years ??

It almost looks good, but theres something wrong with the proportions at the back, maybe its those stupid black roof n pillars, sadly I fear it isnt.

Finally Toyota has realised that with hybrids you need to DOWNSIZE the engine, why did it take them 20 years ??

Hasn't the Yaris always been a 1.5? It was originally the 1.5 power train from the MK2 Prius I thought

There is a lot to like about this new Yaris. Where the Mk3 looked dowdy and grim inside, this at least has a lot more interesting details. There is something of the Mk1 about it all. Won't touch the Fiesta for driving, nothing really does, but it at least has something interesting going on. PLus, can't wait for the the bonkers GR AWD monster coming out!

In my opinion, it looks a lot better than the current model. 61.4 MPG real life economy will appeal. Add in the benefits of Toyota reliability and after sales service, seems like Toyota will have a strong contender in this category of vehicle.