BACK TO ALL NEWS
Currently reading: Electrified car registrations overtook diesels in Europe for first time
UP NEXT
How Max Chilton and the McMurtry Speirling conquered Goodwood

New figures reveal EV, plug-in and hybrid models made up one in four new cars registered in Europe in September, while overall figures increased year on year
Close

Data published by industry analysts JATO Dynamics showed that demand for petrol and diesel cars suffered double-digit percentage drops compared with September 2019, with diesel down to just under 25% of the European market. Petrol cars made up 47% of the market, compared with 59% in the same period last year.

By contrast, registrations of electric, plug-in hybrid and ‘traditional’ hybrid models rose to 25% last month - more than twice the percentage in September 2019. A total of 327,800 units were registered across the month. 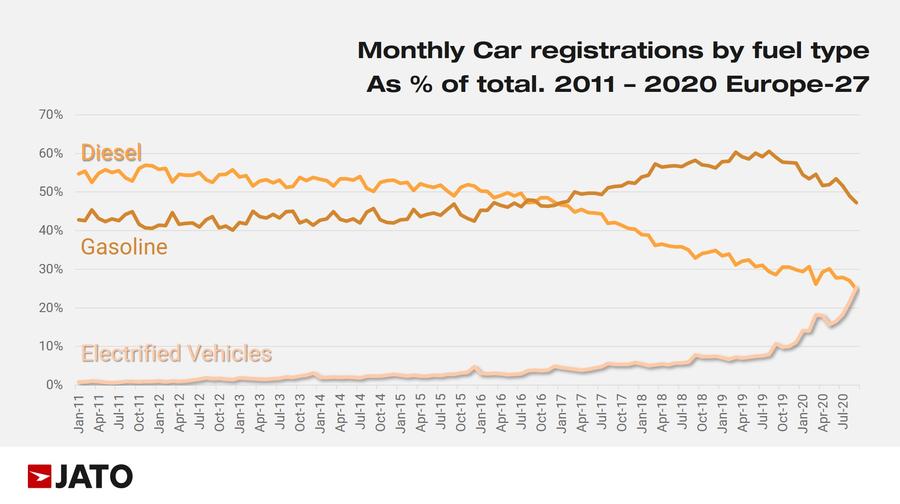 The overall market posted what JATO Dynamics describes as a “timid” recovery. In total, 1.3 million cars were registered across all 27 nations last month, up just 1% over the same period last year. That’s of little consolation given registrations dropped by 29% during the first nine months of the year.

He continued: “Although this is largely down to government policies and incentives, consumers are now ready to adopt these new technologies."

While Toyota leads all other brands with the highest registrations of electrified cars (primarily hybrids), the Volkswagen Group is posting rapid growth. The VW Group registered 40,300 electrified models last month, putting it second behind the Japanese brand. 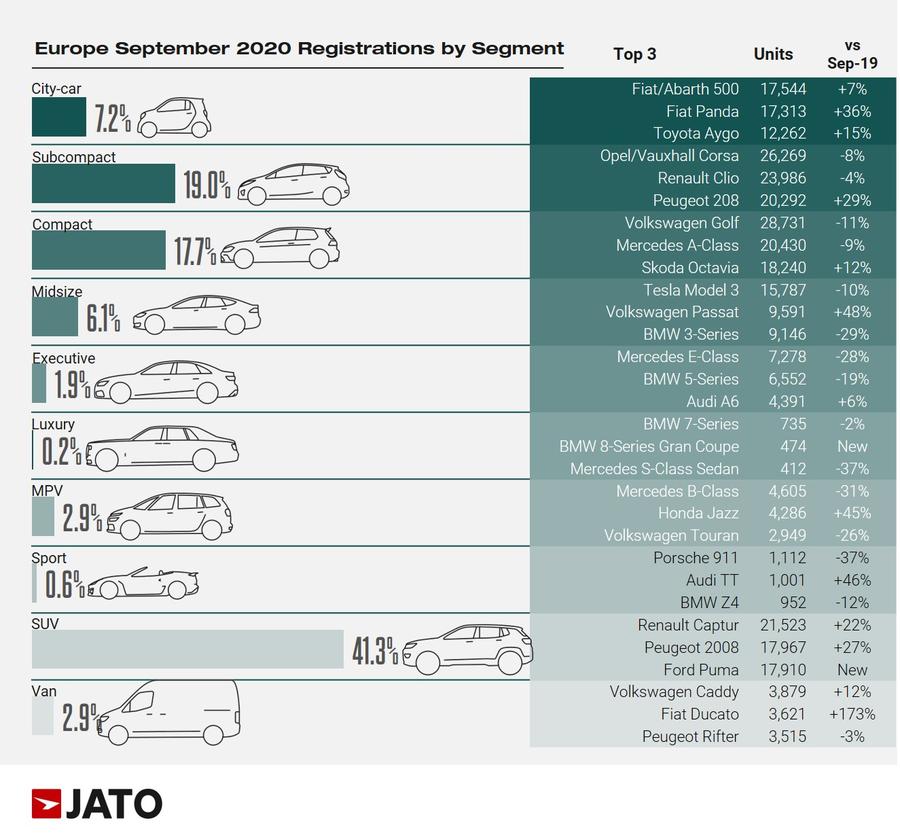 SUVs continue to top the sales charts, grabbing 41.3% of the market, with the Renault Captur, Peugeot 2008 and Ford Puma leading the charge. Despite that, the most registered overall car in Europe was the VW Golf, closely followed by the Opel/Vauxhall Corsa.

The Tesla Model 3 continued to top the fully electric category, with 15,702 registered last month. The Renault Zoe was second, with the newly introduced Volkswagen ID 3 sliding into third. Three times as many Model 3s were registered than the most popular plug-in hybrid - the Mercedes A-Class - while the Californian EV also beat the Toyota Corolla, leader of the hybrid category.

Seen a few. Of course you wont have seen many its only just been released, during a pandemic no less

I am not surprised at the

I am not surprised at the stats though I don't like it! Just picking on the new Golf....there's a lot of sales being recorded but I've seen just 1 Mk8 here in the UK - 1 in Holland a couple of months ago. I am not a fan of it, especially the rear quarter which is just boxy and not right. Anyone else seen many since the launch?

Did you use up battery power on your laptop or phone to type this.  Plus, how hot is Saudi Arabia on human rights, remember Yemen them refuelling next time please