BACK TO ALL NEWS
Currently reading: Electric Kia e-Niro's official range downgraded after test error
UP NEXT
Shame to Lusso you: A eulogy to the last four-seat Ferrari GT

The official range of the electric Kia e-Niro has been downgraded after the firm discovered a external test agency hadn't followed correct procedures for the Worldwide Harmonised Light Vehicle Test Procedure (WLTP).

All new cars to be sold in the European Union are subject to the WLTP test procedure, which was introduced this autumn. Kia says that the independent organisation overseeing the test process accidentally provided an incorrect testing methodology and then approved the results it generated.

This led to the e-Niro being tested for a disproportionate length of time on the WLTP urban cycle, comprising lower overall vehicle speeds and a reduced energy requirement, resulting in an over-estimation of the vehicle’s all-electric range.

Kia itself then discovered the wrong result during ongoing homologation work for another new Kia electric vehicle.

The firm is now contacting customers who have bought the car - which doesn't go on sale in the UK until early 2019 - to explain the changes.

It is not currently clear if the related Hyundai Kona electric, or any other vehicles tested by the agency, will be similarly effected.

In independent Real Range testing by What Car?, conducted on its own test route, the  64kWh Kia e-Niro achieved the second equal highest range of any electric car to date, recording a range of 253 miles. That was matched by the Jaguar I-Pace.

The Hyundai Kona recorded the highest Real Range, at 259 miles. 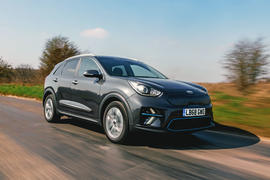 Did no one suspect anything

Did no one suspect anything when larger Niro had less range than smaller Kona?

Before anyone says anything I am saying this as a very happy Niro PHEV owner.

Did no one suspect anything when larger Niro had less range than smaller Kona?

Before anyone says anything I am saying this as a very happy Niro PHEV owner.

Sorry Was it not suspicious when Niro had longer range

But lets be brutally honest, if this was a petrol or diesel car, I suspect nothing would have been said, because its virtually impossible to meet even the new test figure in real world driving. I also supect it would be difficult to achieve the extra 19 miles or the official figure of this EV either.

Let's not forget that VW came to be after the German government lied to their citizens promising that eveyone of them would have a Beetle if they backed with money the creation of the company. VW staff lieing comes from long time indeed...