BACK TO ALL NEWS
Currently reading: Chevy Spark art car revealed
UP NEXT
Lotus confirms new sports car, end of Elise, Exige and Evora in 2021

Chevrolet has unveiled a new special edition of the Spark supermini to promote the brand to younger buyers.

The car is a homage to the ‘woodies’ of 1950s America and has a three-quarter vinyl body wrap that creates a wood effect on the rear of the vehicle. It also features retro-style white rims and tyres.

Chevrolet said it created the Spark Woody to celebrate the brand’s American heritage and connection to youth culture.

Woodies were traditionally large estate cars with timber-framed bodywork that became popular among surfers because they were cheap and large enough to carry boards and equipment.

The style remained popular in the US well after wood was no longer used in car production, with many manufacturers using vinyl panelling to maintain the ‘woody’ look.

The Spark Woody was unveiled at the start of the annual Boardmasters surf, skate and music festival in Newquay, but is not for sale. The special edition is one of a series of Art Sparks created by Chevrolet Europe in the past year.

Others have been designed by German fashion designer Smeilinener and Portuguese art student Jose Rocha. There has also been a Spark DJ Car complete with the world’s largest record turntable.

A further Art Spark, created by British artist Ian Cook, will appear at the British Touring Car Championship meeting at Silverstone this month.See all the latest Chevrolet reviews, news and video 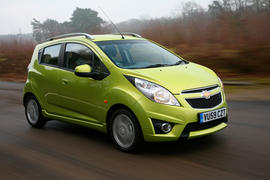 Chevy city car offers lots of space at a temptingly low price, but the supermini segment is filled with similarly affordable rivals that make for tough competition

n50pap wrote:
However, each to his own, although I can imagine people buying one because of the 5 year warranty and service package will grow tired of the embellishments fairly quickly. On the other hand, it saves on polish!

Yes, each to his own. I would never, ever, have this car, but I'd love, just now and again, to see one on the road. It would make me smile and at least it isn't bland.

jonfortwo wrote:
Someone at Chevrolet has a great sense of humour. This is the sort of thing manufacturers should do with small motors. reminds me of a Peter Sellers Mini special back in the sixties.

That's pretty accurate, although Peter Sellers' Mini had wicker effect panels, which presumably were the same fablon as this. It does look plug ugly and wouldn't be my choice because the standard car[especially in black] looks ok.

However, each to his own, although I can imagine people buying one because of the 5 year warranty and service package will grow tired of the embellishments fairly quickly. On the other hand, it saves on polish!

Did I fall into some Rip Van Winkle type sleep? Is it April 1?