BACK TO ALL NEWS
Currently reading: Brabham BT62: 5.4-litre V8-powered hypercar to be revealed today
UP NEXT
Hope for Bloodhound LSR project as sponsor talks start again

Brabham Automotive has released a preview image of its upcoming track-only BT62 hypercar, which is due to be at an event this evening (Wednesday May 2).

The picture is of the car's badge and follows another image that showed the rear LED lights and a large carbonfibre rear wing in darkness.

Brabham describes its model as a "low-slung, race-inspired car". It will cost £1 million and be powered by a 5.4-litre V8 engine, with a power-to-weight ratio of 720bhp per tonne. 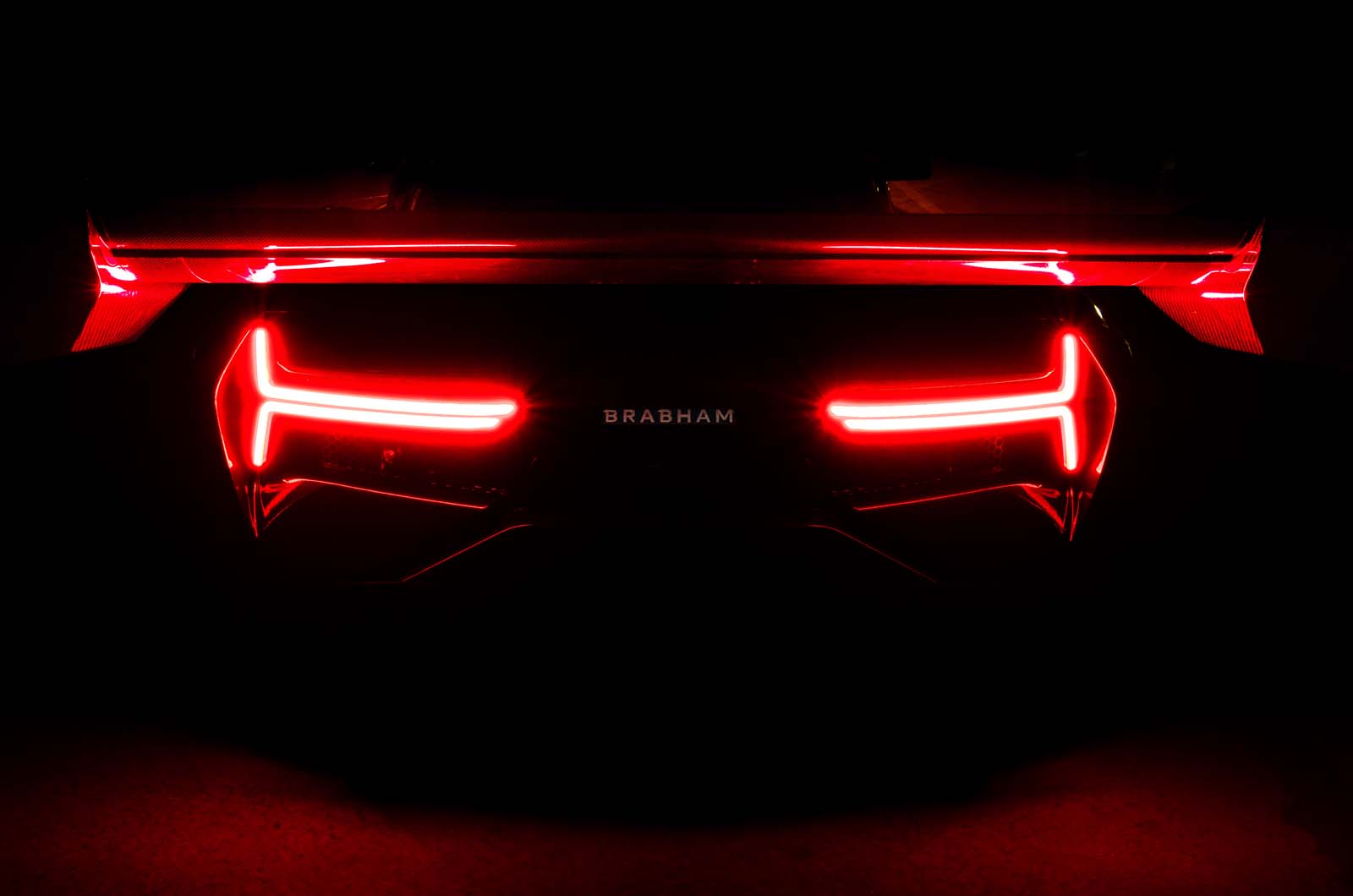 Brabham says the BT62, a track-focused hypercar, will have a dry weight of 972kg and be able to produce more than 1200kg of downforce. For comparison, the McLaren Senna GTR produces around 1000kg of downforce.

Despite the fact that the BT62 has not been shown in public yet, Brabham is already taking orders for the machine, with first deliveries expected later this year. Owners will be given membership of a track-focused driver development programme. After the car is launched on 2 May following a "rigorous and extensive engineering programme", the public will be able to view it at a ticket-only event on 4-5 May that will also include a display of Brabham racing cars and memorabilia.

Footage (below) released last month features a car at full throttle blasting along a pit straight, offering some insight into what the BT62 will be like.

A screen grab of the moment the car passes the camera (above) appears to show a Le Mans-prototype-like silhouette, while the V8 engine revs hard like a racing car motor, with a tone not too dissimilar to that of the eight-cylinder unit used in Formula 2.

A Brabham spokesman declined to comment on the return to racing, stating that the company has been “continually approached on various projects”.

Brabham had been linked speculatively with the Force India F1 team, which, it was believed, could be taken over amid an ongoing legal case involving its owner, business tycoon Vijay Mallya. However, Force India is competing in this year's championship, quelling any possibility of an imminent takeover.

I can’t help feeling this Car will be nothing other than a Herd Car, not much to pick and choose in styling and performance isn’t going to be Tesla quick (Tesla sportscar can do allegedly 0-60 in 1.9secs) a wait and see I guess?

I don't understand who

I don't understand who actually wants a 'track-focused hypercar'?

What is it for?  Tracks are generally terrible places to hang out at, and just driving your car around a track for no particular reason very quickly gets intensely boring.

So it won't be a good road car, and probably a terrible one.

And it won't be a good racing car - for a £1m you can buy a not very old real racing car that will be enormously faster.

It is like getting obsessed about running spikes, without actually being an athelete.