8
Share review
This carbonfibre-clad version of the Abarth 124 Spider looks the part, but does its detachable hardtop make much of a difference?
Share
Open gallery
Close

This GT is the latest version of the lively little Abarth 124 Spider, which itself is the hot sibling of the Fiat 124 Spider.

But before you get too excited, know that the headline act is simply a new carbonfibre roof. In fact, the biggest news here is that it’s almost certain this car arrives in lieu of the proper 124 Coupé that was once heavily mooted. The GT also gets a set of lightweight OZ Racing wheels that save 4kg in unsprung mass at each corner, and elsewhere you can have carbonfibre for the door mirror casings and front bumper.

The roof itself weighs only 16kg, so you’d expect this car to exhibit a small but useful advantage over its regular sibling at the scales. Curiously – usefully, Abarth claims – this isn’t the case, because not only does the standard roof mechanism continue to lurk beneath the rear decking, but so does the fabric. It's fully functional, meaning this car has two roofs.

It also means the carbonfibre-topped GT is slightly heavier than the standard car, at nearly 1080kg. You do, however, get a good-looking feature evocative of the old blacktopped Group 4 rally cars that stormed Monte Carlo and the Acropolis during the early 1970s.

Under the skin, there are no changes. The driveline is identical, meaning the same 1.4-litre Multiair Turbo engine develops the same 168bhp and 184lb ft. There’s a mechanical limited-slip differential in the rear axle with double wishbones at the front and a multi-link rear, à la the Mazda MX-5, with which the 124 Spider shares a platform.

There’s also the opportunity to option the Visibility and no-cost Heritage packs. The former brings about more mundane options such as automatic windscreen wipers and headlights, while the latter will divide opinion with a matt black bootlid and bonnet. 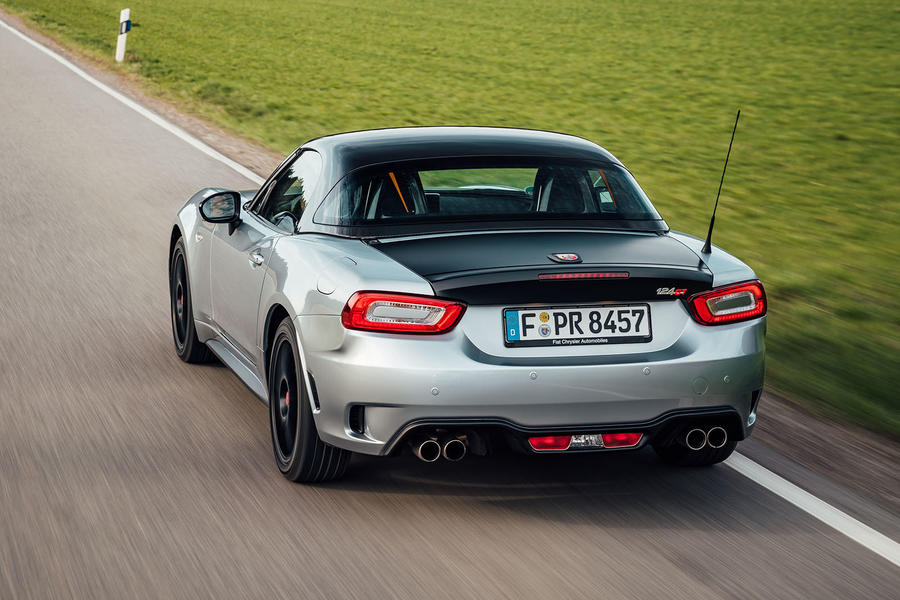 The roof is a bit more than just a basic lid. For a start, it’s lined, and with the same stuff used for the folding fabric equivalent. The large rear window also features a defroster that Abarth says can clear it in less than three minutes. It is, in essence, a good roof that will keep the rain off your head.

As per the standard 124 Spider, the driving experience is at first dominated by the standard Record Monza exhaust plumbing. It emits a gargling, gurgling, hollow blare that’s a bit over the top but suits a car that’s so charmingly thuggish. Snick the stubby gearlever into the first gate, blip the surprisingly sharp throttle and you’re away. 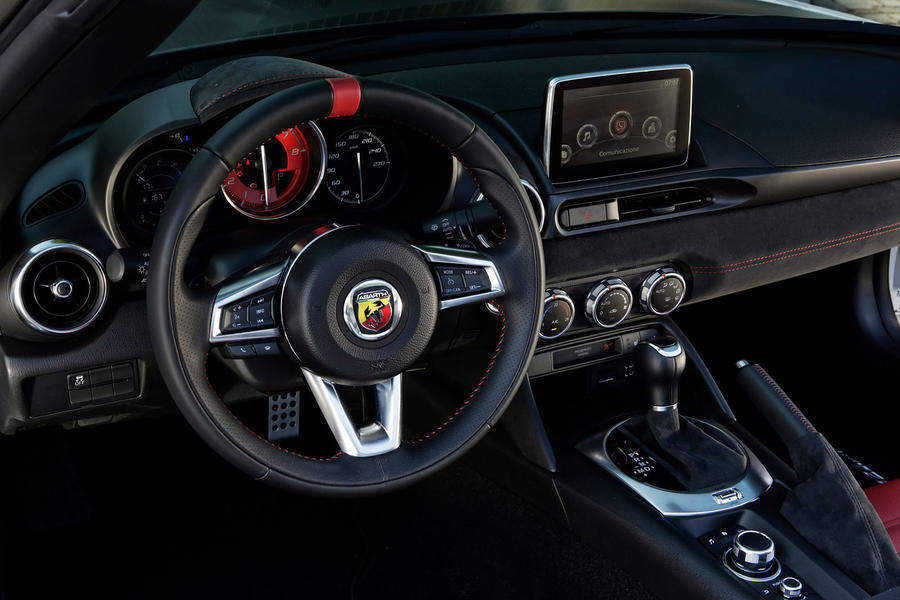 On the move, it’s just about uncompromising enough to justify the looks. As we’ve previously said, this car is firmer and corners flatter than the MX-5, although if you were being critical you might say there’s a touch too much slack in the suspension that’s residual from the Fiat. Push harder than you might normally and this results in the unwelcome sensation of delayed roll response, but for the most part, this chassis is agreeably agile and responsive.

This car’s powerplant – turbocharged, in contrast to the Mazda’s four atmospheric cylinders – remains a highlight, with a torque-rich mid-range that offers up an unexpected turn of real-world pace. Our road test figure of 8.3sec from 30-70mph in fourth gear was roughly a third quicker than the Toyota GT86 could manage, and it’s that accessible thrust that allows you play with the 124 Spider's easygoing chassis balance.

It’s difficult to say whether this car is perceptibly more refined than its soft-top sister, although we can tell you that at an indicated 149mph on the autobahn, conversation was barely any more strained an endeavour than it is at 70mph.

This is a tough one. Without a microphone to test it, any uplift in cruising refinement over the fabric-roofed car would likely elude you, and most people outside Abarth’s chassis development team will struggle to identify any enhancement to torsional rigidity, this tester included. With the need to undo bolts, the carbonfibre top is less convenient, too. You can’t take it with you, either. And it’s expensive.

UK pricing is yet to be announced, but in Germany, there’s a 10% premium over the standard 124 Spider, which would bring the GT to roughly £33,000. A top-spec MX-5 RF in Sport Nav trim offers greater versatility and a purer driving experience for almost £6000 less, although it is that much more demure in character.

And that's why you conceivably might fall for this costly Abarth. It’s colourful and brash – unique, too – with a slightly superficial personality that somehow makes it all the more likeable. And that carbonfibre roof also looks ace, so if you like it, have it. 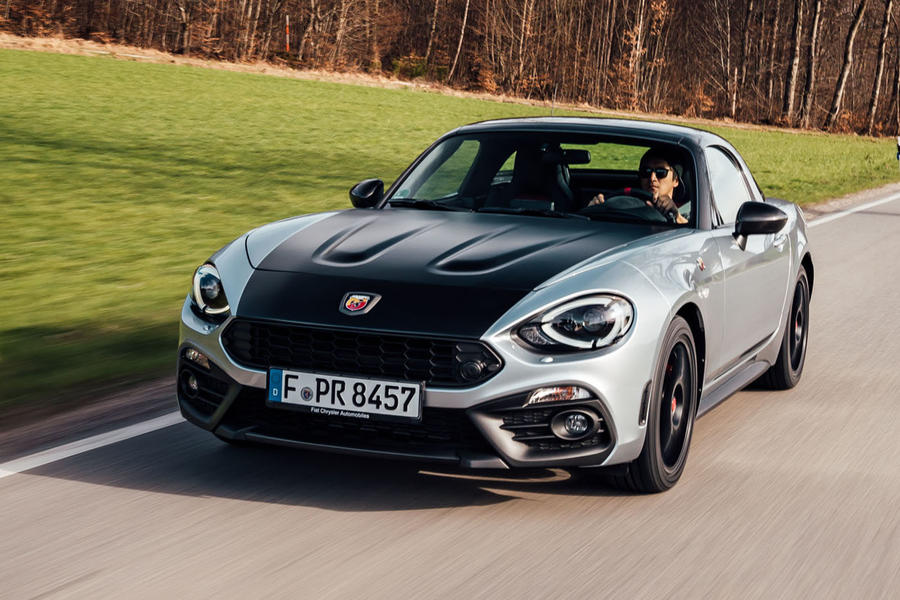 It is a great compliment to Mazda, a relatively small company that makes cars for Toyota and FIAT. Judging from customer surveys of Toyota and FIAT cars, I feel much more confident to buy the toyotally Japanese cooperation.

What do you expect? Its called spam. Of course its going to be dodgy. And your not helping by quoting it..

...must be immediately deleted by the admins of the Autocar website !!!

(Wouahaha -- I could bet you'll find their invasive postings unchanged, next year and so on.)

Ontopic: this very Abarth 124 version brings me back precious memories from the seventies, when I was watching with my father (big Fiat fan and 850 Coupe owner) rallye images with Markku Alen drifting crazy donuts...

...make a coupe out of this and I'll have one instantly ! (that means a version excluding the folding roof mechanism and the textile roof itself.)

The horrendous asking price would be then lower (here in Romania, it costs +43K euros without the CFK hardtop) and the kerb weight also,.with the rigidity and insonorization advantage.