BACK TO ALL NEWS
Currently reading: BMW to introduce radically different EVs from 2025 onwards
UP NEXT
Future BMW M3 to be ‘groundbreaking’ EV with traditional feel

The BMW Group will enter the 'third phase' of its transition to electrification from 2025, by which point it plans to have sold two million pure EVs to customers worldwide.

Termed 'Neue Klasse' (New Class) in reference to the hugely popular BMW saloons and coupés that were sold in the 1960s and 1970s, this new era will see the brand usher in a new generation of electric powertrains, adopt a "radically new" approach to sustainability and introduce a new software platform.

The first stage in BMW's transformation process began with the launch of its 'Project i' programme, under which it launched its first electrified models and explored new avenues in software and "digital interaction with the vehicle". The second phase introduced the 'Power of Choice' strategy whereby all BMW models are available wih a variety of powertrains ranging from combustion, to hybrid, to pure EV.

And now, in this third stage, BMW will develop and offer a "completely novel user experience never before seen in series production vehicles". It will be centred around a new approach to vehicle platforms that will usher in 'regionalisable technology stacks', which will allow each vehicle's operating system to be customised according to the region in which it will be sold.

BMW will also introduce a new 'digital first' approach which will offer individually configurable upgrades and new features throughout the vehicle's lifecycle for "an increasing proportion of revenues". The first step in this process will be the introduction, this year, of the firm's new eight-generation iDrive system in the iX SUV - which offers high-speed over-the-air updates.

By the end of this year, BMW says, it will have the world's largest fleet of "vehicles capable of installing new or upgrading existing functions over the air". 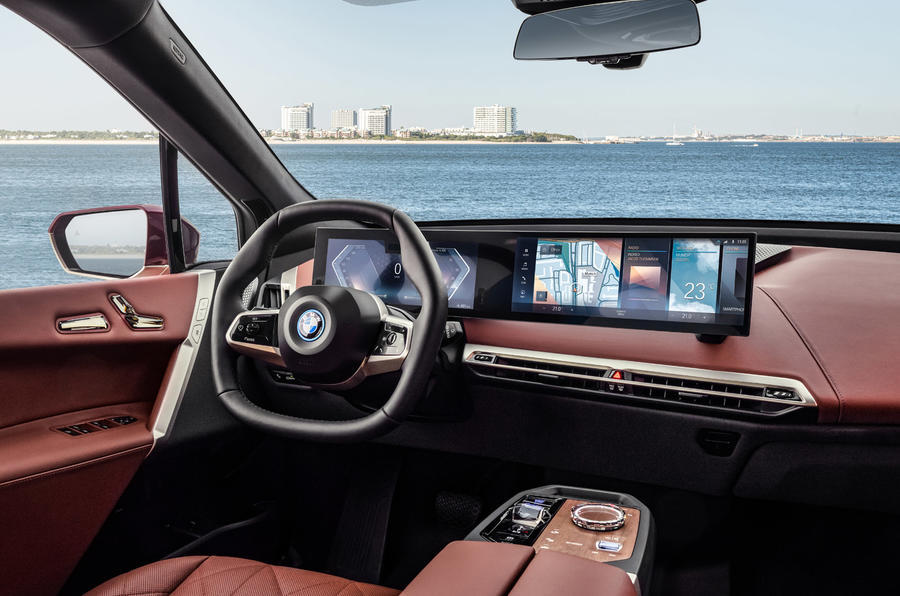 Neue Klasse models will be drastically different in their design to BMW's current cars, with "proportions that differ from the past", an emphasis on aerodynamic optimisaiton and more interior space than current BMW EVs.

The firm will also take a modular approach to powertrain differentiation, with variations of the same system used for its most accessible models right through to top-rung M performance cars - a branding that will be used throughout the transformation. The system will be based around a newly developed battery concept which uses an "optimised" cell design to offer significantly improved efficiency and reducing manufacturing costs.

BMW hints that it will preserve the "typical BMW driving experience" in its new EVs, but that it will be enhanced with the use of advanced driver assistance functions and autonomous capabilities.

Combustion powertrain output will be gradually wound down in line with the brand's electrification ambitions, while the number of fully electric BMW models available will grow by 20% annually between 2025 and 2030. By this point, the Group says, at least 50% of its global sales will be fully electric.

The firm has also hinted at a commitment to hydrogen powertrain development; it will build a 369bhp hydrogen-powered version of the X5 SUV later this year on a limited basis, but Zipse said he could "see this as a production car" in the future. The firm will seek to reduce FCEV development costs in time for hydrogen infrastructure worldwide to be expanded and improved, in order to bolster the technology's feasibility for production cars.

“The BMW Group is never satisfied with what it has achieved so far – that's what sets it apart from the rest of the field. This spirit will characterise the Neue Klasse: high tech on four wheels for customers intent on experiencing in just five years' time how mobility will feel in 2030,” said CEO Oliver Zipse.

By 2023, the Group will have 12 pure EVs on sale worldwide, offering at least one electric car in 90% of its current market segments. As part of this strategy, the Mini brand will go all-electric by "the early 2030s", launching its final combustion model in 2025, and CEO Oliver Zipse said "you can expect fully electric models from Rolls-Royce as well".

Sustainability will play a key role in the brand's revamped model strategy. Neue Klasse models will be built using a "sharply increased" proportion of recycled materials, using them wherever quality and availability allows. To avoid material mixing during the vehicle recycling process, the firm will also increase its use of 'monomaterials' - which will ensure a higher proportion of the vehicle's make-up can enter the recycling loop.

A concept previewing this new approach to vehicle production will be shown at the Frankfurt motor show in September 2021.

By 2030, BMW plans to reduce CO2 emissions per kilometre by 40% for each of its models, in line with which it will overhaul its component supply chain to offset the environmental impact of electric vehicle battery production.

New 2021 BMW i4: production model on sale in autumn

I hate the migration to touch screens, they are so user unfriendly  -when compared to more tactile knobs and switches where you can use muscle-memory to find the control and bio-feedback to measure the application of torque of switch action.

I really don't like glass dials either. The design of the dials is oart of the internals ambiance of a car, adding character to a dashboard. Something that a glass screen can never do.

None of BMW's new EVs are as convincing as the i3 because they refuse to commit properly to developing EVs instead of building combustion engined cars and then thinking it's OK to add an electric motor instead of the ICE. As a current BMW owner and past i3 owner there is nothing they've done or shown that at all interests me.

This article is just rewritten BMW fluff which they seem to be constantly releasing instead of doing something serious like actually releasing good EVs.

BMW has already done radical with the lightweight high tech i3. I just wish the company had stuck to this concept rather than trying to make EVs conventional with long bonnets, heavy weight and ever bigger wheels. Maybe profits come first and customers are not yet ready for sensible efficient designs that may look a bit different to established combustion cars.

BMW has already done radical with the lightweight high tech i3. I just wish the company had stuck to this concept rather than trying to make EVs conventional with long bonnets, heavy weight and ever bigger wheels. Maybe profits come first and customers are not yet ready for sensible efficient designs that may look a bit different to established combustion cars.

But, aren't all car makers doing the same?, and, to an extent, I am glad there is still a long bonnet and a grill, they may not need to be, but, I believe a car has to have a face for want of a better description, and larger wheels look better and suspension technology is removing the brittle ride,plus, when the price to produce comes down, carbon fibre wheels will be used, they are 40% lighter than conventional alloys.