BACK TO ALL NEWS
Currently reading: BMW axes 6 Series GT in UK due to SUV demand
UP NEXT
2022 Mercedes-Benz EQE: images preview EV's radical design

BMW axes 6 Series GT in UK due to SUV demand

BMW is withdrawing the 6 Series Gran Turismo from the UK due to slow sales of the five-door executive liftback.

The UK was expected to be one of the biggest markets for the model, which replaced the 5 Series GT in 2017, but BMW has confirmed it won’t offer the facelifted version that has been unveiled for sale in other countries. The current model will be removed from UK price lists next month.

The demise of the 6 Series GT in the UK is put down the increasing popularity of BMW’s SUV models, which, company officials say, offer similar levels of practicality in combination with greater ride height and a higher seating position.

Just 209 examples of the 6 Series GT found homes across Europe during the first month of 2020. The model was also axed from the US last summer due to similarly slow sales. Anecdotal reports suggest the model, as with the 5 Series Gran Turismo it replaced, stayed on sale for so long as it was a personal favourite of BMW board chairman Norbert Reithofer.

Among the key changes to the Audi A7 Sportback rival for its facelift is an exterior styling upgrade that ushers in a new-look front grille and altered headlights.

Revisions at the rear are more subtle and include reworked tail-lights that feature a more structured look than before and a redesigned bumper with trapezoidal tailpipes.

There is also a revised dashboard with new trim pieces, high-gloss controls and a 12.3in infotainment display. There are subtle mechanical changes across the board, with both petrol and diesels still offered. 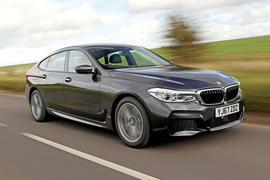 The high-rised 5 Series GT was a troubled car. Has BMW sorted it this time round with the 6 Series Gran Turismo?

All previous "GT" models were

All previous "GT" models were rather ugly. However this one has a good looking front end.

Perhaps a niche to far for BMW's UK customers, like it's 3&5 GT siblings was really neither fish nor fowl not having the capacity of the estate models or the raised driving postion of the company's SUV's,perhaps BMW are starting to spread themselves to thinly by producing too many models

Perhaps a niche to far for BMW's UK customers, like it's 3&5 GT siblings was really neither fish nor fowl not having the capacity of the estate models or the raised driving postion of the company's SUV's,perhaps BMW are starting to spread themselves to thinly by producing too many models

it actually has more load space than the 5 series estate amazingly. Around 20% more.

I've a 6 series GT. In a world of invisible but ultra common SUVs, I love driving something a little different. They're rare, and resales are a little better than most.