BACK TO ALL NEWS
Currently reading: Better than the real thing? Bell Sport & Classic Ferrari 330 LMB driven
UP NEXT
New Morgan Plus Four CX-T is rally-ready sports car

4500 hours of work went into restoring and modifying this homage to Ferrari's LMB racer. We get behind the wheel
Share
Open gallery
Close
Share story

You have to be very rich to own one of the more desirable 1960s Ferraris, but you have to be very brave to actually drive it. The rising valuations for the sort of premier cru classics that get the best spots on the lawns of upmarket Concours events has turned them into hugely valuable assets – hard to insure and, if the very worst was to happen, almost impossible to replace.

Yet take the need for proven provenance out of the equation and it is possible to create all but identical versions for much less. That’s the logic that has spurred the move by some manufacturers to create their own officially sanctioned ‘Continuation’ models. But it’s also led some brave souls to effectively build their own dream cars. The one you see here isn’t one of the four original Ferrari 330 LMB racers. But it is very nearly identical, and the experience of driving it on public roads is every bit as special and a fair bit less nerve wracking.

The car has been built by Bell Sport & Classic in Hertfordshire. The project was originally begun by a Ferrari enthusiast called Ed Carter who decided to make his own LMB rather than one of the more common GTO or SWB replicas. He bought a relatively common 330 GT to serve as the basis of the conversion and commissioned a specialist team to start work. Tragically, Bell died in a crash in 2015, leaving the car unfinished.

Bell Sport & Classic bought the LMB and decided to complete it. Not as a commercial project, but rather a manifesto piece for their restoration business, demonstrating the altitude of the standard they hope to achieve on other period sportscars. Getting the LMB finished and to the standard you see here took at least 4500 hours of work, including making many rarer parts from scratch. 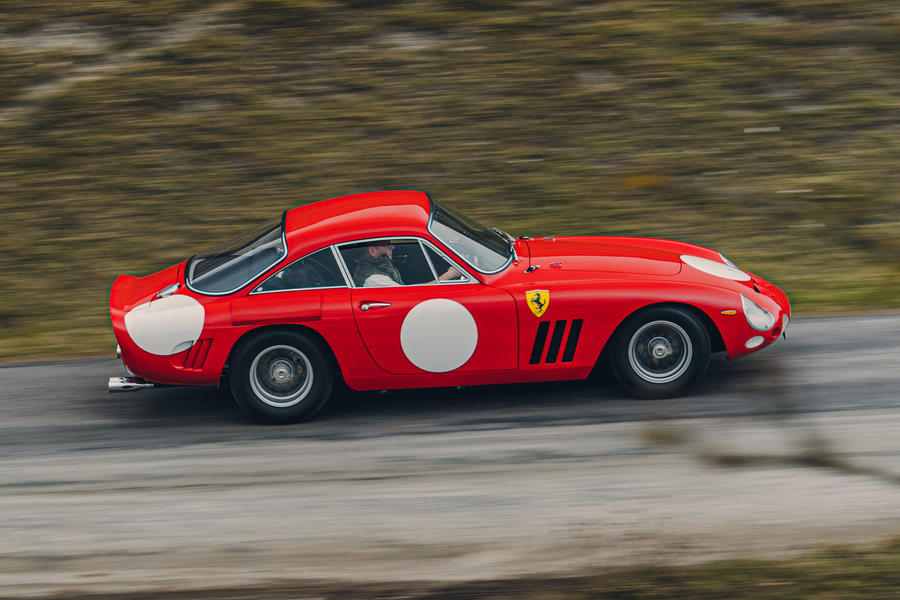 The commonality of many ‘sixties Ferraris meant a fair amount of the 330 GT could still be used. The donated 3.0-litre ‘Colombo’ V12 was fully rebuild, its capacity was increased to 4.0-litres and a dry sump lubrication system fitted. Carefully balanced, the engine has proved itself capable of making 390hp at 7600rpm on a dyno, almost exactly what the original LMB racer was claimed to be capable of. The hand-formed aluminium bodywork features a far crisper paint finish and tighter shutlines than any contemporary Ferrari would have enjoyed in period. Components including the window catches and aluminium housing for the vast gear lever were newly made, existing alternatives not reckoned to be good enough. The Ferrari shields on the LMB’s wings have a slightly lumpy finish because they have been hand painted, just as they would have been in period.

There have been changes, although all of the sort that most early ‘sixties Ferraris were later upgraded to: a plusher interior, an electric cooling fan to keep the engine happy in traffic and some sound deadening. A modern fuel tank is also mounted inside the leak-prone riveted original. It also has a five-speed synchromesh gearbox in place of the four-speed ‘dog’ box Ferrari used for racing. 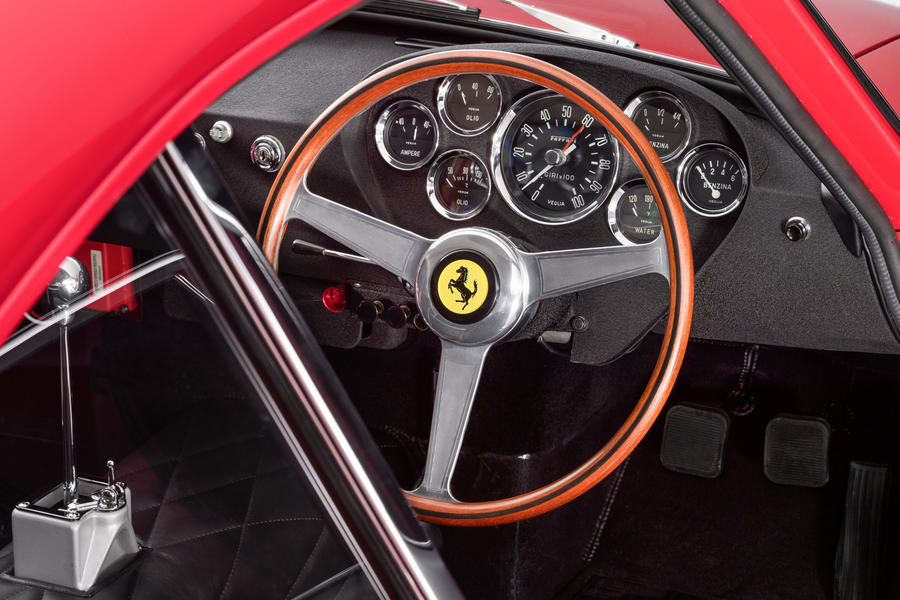 The driving experience is entirely special, even at everyday speeds. The engine is impressively tractable at low revs and sounds spectacular when worked harder, performance impressively brisk even by 2021 standards. The gearchange is smooth and accurate and the brakes are powerful; surprisingly so – the LMB raced with a servo, unusually, and this car has one too.

The chassis is surprisingly compliant, they competed in comfort in those days, and although the tall Michelin XWX tyres start to surrender grip early when pushed, they do so progressively and predictable, the steering relaying plentiful feedback from the front axle. Even on tight, busy roads and well within speed limits the Ferrari feels edgy exciting.

The LMB is a one-off, not the start of a series. Next in line for workshop time are an L-Series Dino and a 275 GTB, and anyone wanting their own car to be finished to a similar standard is invited to get in touch. Even brief acquaintance is proof that dream cars can be built, not just bought off the shelf, and that a replica can feel every bit as special as the real thing.

I appreciate all the man hours that went into building this car, and it looks nice, but, it's just not an exact copy, even an expensive looking Kitcar look about it, a sort of 8/10ths version, but, if your customer is happy, then that's fine.

I agree there is something not quite correct here.....I have studied the windscreen height....not sure if it is the photography, but you could be right....it is out of synch.

The track width is also way out....the original cats fill the arches out on similar size wheels (this one definitely doesnt).

The 330 LMB is probably my favourite Ferrari -even more so than the 250 GTO and 250L of which it shares styling cues. I could never understand why it was worth less than a GTO, especially given its far greater rarity than a GTO.

As soon as I saw the photos I could see there was something fundamentally wrong with the fake 330LMB.  It's the windscreen.  Look at its height in relation to the side windows - it is about two inches too high.  The effect is to make the whole car look out of proportion, dare I say a little like those ghastly '250GTO' Datsun 240Zs.

It is strange that so much effort clearly went into the building of this car yet one big mistake compromises the whole enterprise.