BACK TO ALL NEWS
Currently reading: Best cars of 2014 – Ford Tourneo Connect
UP NEXT
UK car finance tightened to become 'fairer' for customers

I’ve been to Colin Goodwin’s house. It’s lovely, but it doesn’t have a driveway, so he’ll be waiting an awfully long time to charge his Tesla Model S from an extension reel.

Meanwhile, Matt Prior’s horsebox won’t look quite as right towed behind a shiny new BMW i8 as it does behind his Land Rover Defender. Chas Hallett would end up so protective of the cabin of his beautiful Roller that he’d probably make his eight-year-old lad put on a zorbing ball before he got in. These, much as I like them, are not real-world cars.

Unlike the Ford Tourneo Connect, which might be the best real-world car I’ve driven in years.

If it wasn’t a van, that is. There is no denying it. But it’s a better-handling van – a proper European Ford in most dynamic departments. Incredible hard-working practicality and value for money would be the reasons you’d buy one, of course.

But next to utilitarian rivals that often aren’t even very pleasant to drive, never mind engaging or interesting, the Tourneo ends up selling itself on its unlikely dynamism almost as hard.

Here’s the figure that matters: 2410 litres. That’s how much carrying capacity this vehicle has, loaded to the roof with the back seats taken out. That’s as much as you can squeeze into your typical large family estate car like a Ford Mondeo or Mercedes-Benz E-class, plus a couple of hatchback boot space worths for good measure.

The cargo bay is wide, long, tall and square – and that’s the difference between being able to carry really bulky stuff like lounge furniture, trolley barbeques and hardware panels and having to leave them by the kerb. Pushbikes go straight in, wheels on. Spec your Tourneo carefully and it even comes with a folding front passenger seat.

Having bought a Tourneo, you wouldn’t ever think twice about using it, either – wherever you were going. The ride is fine. Its steering is hefty, quite direct and consistently paced and weighted – damn near as creditable a system as you’ll find on a new Ford Focus, really. And the car’s handling is equally creditable.

The body control is remarkably good, grip levels are well balanced, and although the long wheelbase prevents you from calling it agile, it’s still a sight more engaging than it has any right to be.

Doesn’t make it desirable, of course, but think of this car as one half of a perfect double act. The Tourneo is the kind of car that makes room in your life for an ambitious restoration project, a mad track special or the modern two-seater that you’ve always hankered after.

I’m a big believer in spreading your bets when it comes to your domestic motoring – instead of buying that Porsche Macan Turbo, having the Cayman and a cheeky Tourneo to go with it. That way happiness lies. No car can ever do everything, but this one’ll certainly do everything you need.

Come back tomorrow as we reveal another star car of 2014 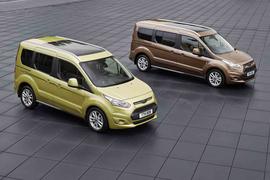 The new Ford Tourneo Connect is a practical and flexible family MPV, but those looking for luxury will want to look elsewhere

I thought it was just me having problems with the site since its update, much prefer the old Autocar.
Daniel Joseph 31 December 2014

I thought it was just me having problems with the site since its update, much prefer the old Autocar.

As well as this problem, the "track" function on the profile page has disappeared since the website was "improved" a couple of weeks ago. Maybe North Korean hackers are behind it...
March1 30 December 2014

And while we are complaining about the website changes, is it just me or do the images no longer pop out to a larger size when you click on them??
catnip 29 December 2014

Can anyone tell me how to

Can anyone tell me how to read more than one page of comments on this forum? I thought this problem might have been sorted by now, but until then it seems pointless adding anything. Thanks in advance for any advice, though if this goes over one page I won't be able to take advantage of any help.
View all comments (4)