BACK TO ALL NEWS
Currently reading: Bentley Bentayga vs Range Rover - luxury SUV comparison
UP NEXT
Hidden gems: A peak behind the scenes at Beaulieu

Bentley’s Bentayga aims to combine the abilities of a luxury car, sports car and 4x4, but can it upstage a £150k Range Rover?
Open gallery
Close

If you’re a British nonagenarian head of state and you want to let your 94-year-old husband drive the leader of the free world and his wife around, really you’ve only got one choice of transport. At least, until now you’ve only had one choice. You did it in a Range Rover.

And if you’re going to do it in any Range Rover, might I recommend one of these newfangled SVAutobiography models? It’s the slightly awkwardly named recognition that people with an unmentionable amount of money don’t always want to be seen in a supercar or what might be mistaken for an airport limousine. They might be prepared to spend an incredible amount on a 4x4.

This seems blindingly obvious now, but until recently, it’s as if there has been a cap on the money an SUV can ask. But like Roger Bannister breaking the four-minute mile, once somebody does it, everyone realises they can. Hence the Bentley Bentayga, which had been a quietly mooted, should-we-shouldn’t-we project at Bentley Motors until Wolfgang Dürheimer arrived as Bentley’s gaffer (the first time) in 2011 and just told them to get on with it. He’d seen what the Cayenne had done for Porsche.

The following year, we all took a deep breath and a step backwards when he pulled the covers off the EXP 9 F concept at the Geneva motor show; even Dürheimer talking to a bloke with a falcon on his arm couldn’t quite distract from its face. 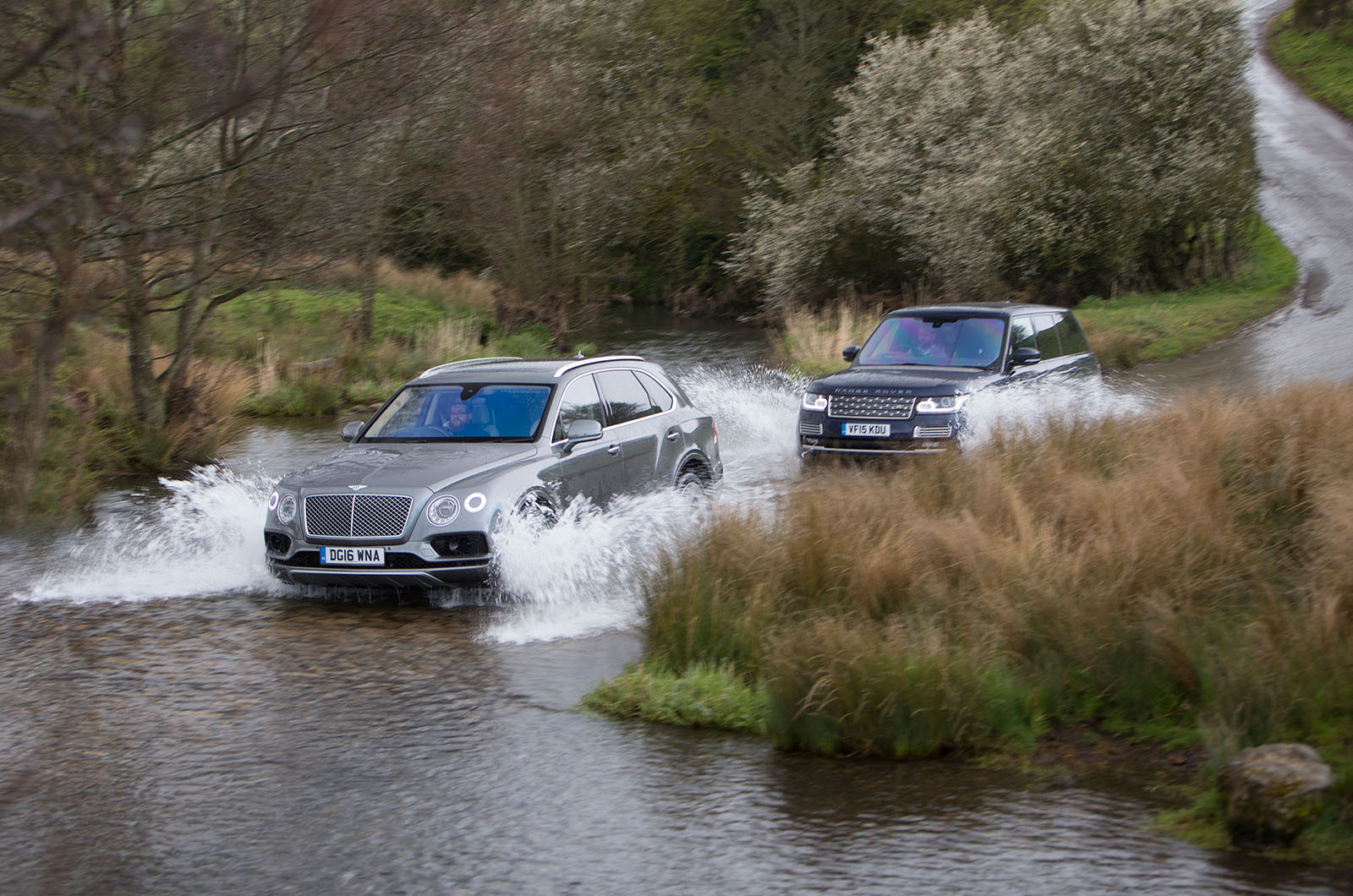 Today? Well, the EXP 9 F has morphed into something slightly less noticeable, but it’s still unmistakably a Bentley. With that nose, it couldn’t be anything else. I don’t know whether an SUV is just a more natural fit with Bentley than it was Porsche, or whether we’re just more accustomed to the existence of 4x4s, but here it is. But being a Bentley brings with it some broad demands.

Such as? They won’t let it out of the door unless it has a top speed of 187mph and it can do a passable impression of a sports car while it’s at it. Which means it has to have 600bhp. Which means it gets a twin-turbocharged 6.0-litre W12 engine because, this being a Bentley, it’s quite heavy because, being a Bentley, there’s an awful lot of bull leather and burr veneer in there. This is, after all, a luxury car. Oh, and it’s an SUV, and there’s the outside chance that somebody minted will decide they want to drive up the edge of a sand dune without getting stuck, or tow a 3.5-tonne boat and trailer out of one of the great lakes without rolling back into one. Plus – genuinely one of the hardest things to do in a car – drive up some wet grass at the races. All while retaining the ability to do 187mph. I don’t think there’s a modern car with a broader remit than the Bentayga’s.

To that end, then, the Bentley-owning VW Group chucked the whole shebang at it. The platform, in effect, is shared with the Audi Q7, but it’s inconceivable that Bentley could make this car do all it wanted to without the adoption of the 48V system that the Bentayga shares with the SQ7. There’s no electric engine charge-boosting here (a 6.0-litre W12 with two turbos being perceived as quite enough already, thank you), but it does have beefy, electronically controlled active anti-roll bars that can slacken off when the car is going straight to give Bentley the kind of ride quality it wants yet can firm up in corners to give the kind of body control it needs. 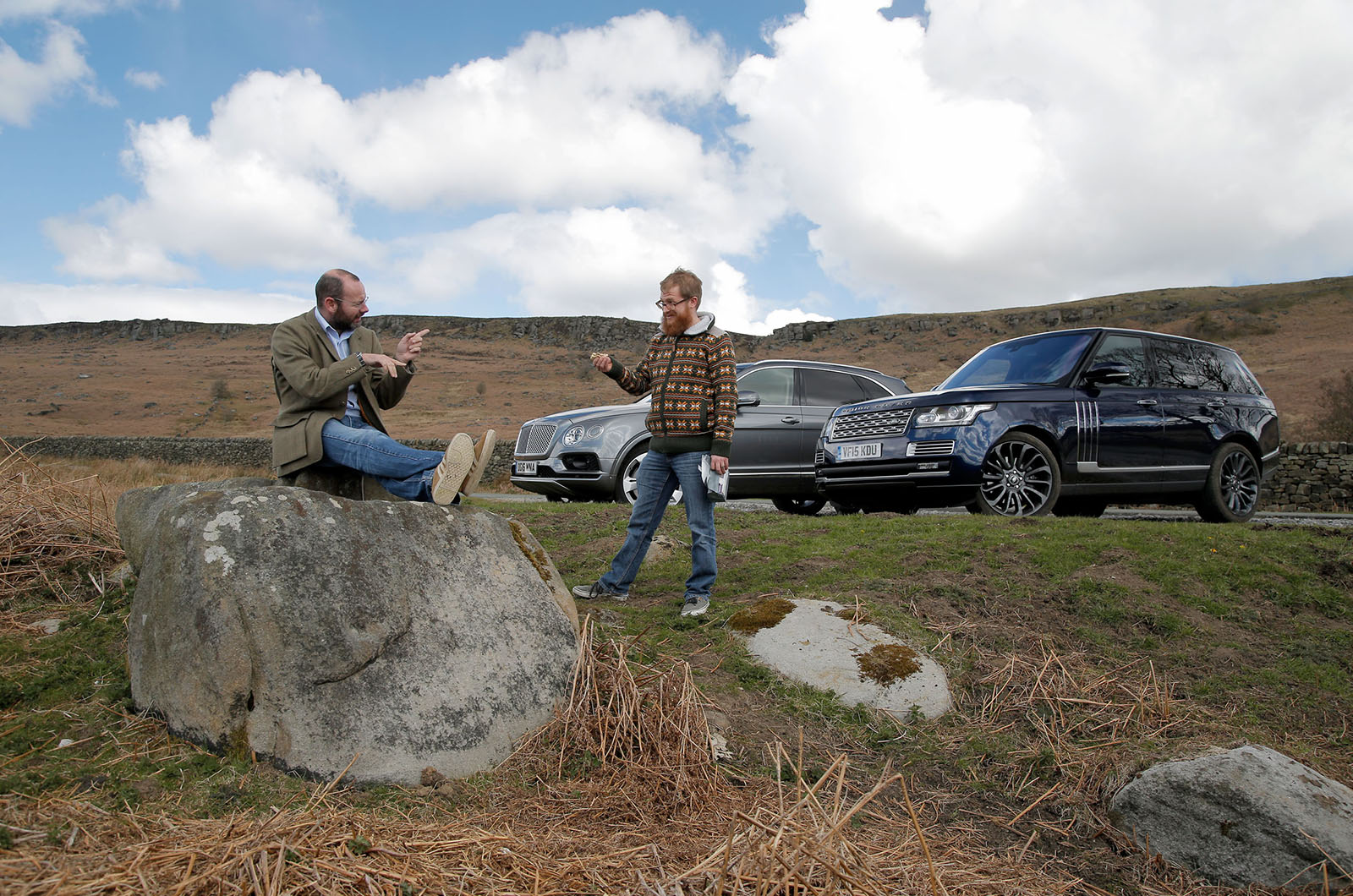 The Range Rover is a bit more old-fashioned. Or, at least, it had its remit nailed on a few decades earlier. This is a car that’s very comfortable in its skin – a luxury car (although Bentley would consider it premium rather than luxury, one suspects) that can go quite far off road. A very long way off road, in fact, should you ask it to, and people sometimes do. Or if they don’t, they expect it to effortlessly get them to the places they do ask it to go, where its reserve of ability is quite reassuring. You don’t need Alan Titchmarsh to water your geraniums, but it’d be nice to know he’s got the skills in hand.

But even in its premium/luxury  (argue it out among yourselves) past, Range Rover has never asked the car to quite do this before: sell at £149,800 before options in this short-wheelbase V8 petrol form.

So what do you get? Knurling. Lots of knurling, that diamond-shaped finishing on metal surfaces. There is also an awful lot of wood and leather everywhere, including around the two individual rear seats, which get TV screens, heating and ventilation, and it’s telling that every time we stop to take photos of the Bentley, I come back to find the Range Rover’s driver in one of the back seats.

But it’s the front I’m more interested in – trust me, Michelle, the back of either car is really very nice indeed – because the intrinsic characters of these two cars are very different. Even their driving positions give some of that away.

The Range Rover first, then, because it’s a car you’re more likely to know. You’re seated high, there’s a lot of glass area (the windows stretch to halfway down my arm) and, like the pilot of a boat, you’re afforded quite the view – of where the front of the bonnet ends and the flat sides in the big door mirrors. The Range Rover is a large car (4999mm long and 1983mm wide), but it doesn’t always feel it on the road. This is a car that feels big enough for places like the US but still like it was developed for narrow British country lanes. Which, I suppose, it was.

So, too, was the Bentley, but without, you can’t help thinking, the same amount of thought for threading it through narrow, muddy gateways on the way to the shooting field. (At 5141mm and 1998mm, it’s longer and wider.) The driving position is lower and the window line much higher – up to my shoulders. But, by gum, it isn’t half nice in here. 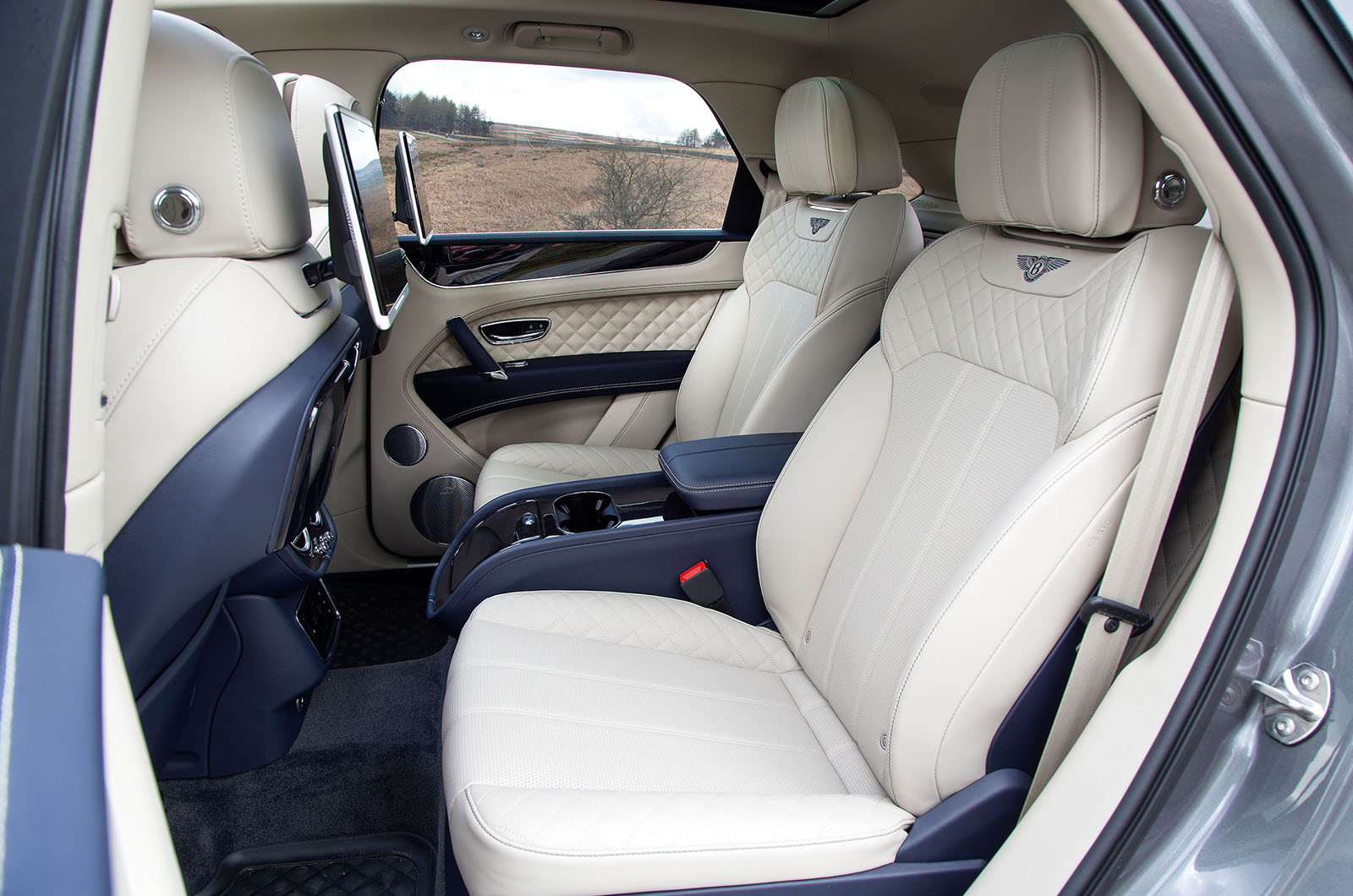 Sit in the Range Rover in isolation and you’d think that it’s a nice spot. There’s leather, there’s wood, there’s knurling, all that stuff. But then hop into the Bentley and you realise why ‘luxury’ manufacturers sometimes get a bit sniffy about the rest of the world. It’s in the detail (see separate story, overleaf). The veneer is impeccably finished and attached to other lumps of solid wood. You can’t ease your fingers underneath and bend it up. Where there’s what looks like metal, it is metal. And the Bentley’s leather is first rate. In the Range Rover, there are ruffles in the steering wheel leather where it’s stitched. Not so in the Bentley.

Yes, at £160,200, the Bentley is more expensive and there’s plenty of room to make that price start with a two. But whereas the Range Rover feels like it’s being pushed out of its comfort zone, the Bentayga is barely getting into its stride.

Is it better to drive, though? Yes, if you accept the premise that it should do more things than the Range Rover. Because if you want the best-riding, most comfortable car, then the Range Rover is the one. It has a long-travel throttle pedal and easy, oily steering – maybe a bit too little self-centring around straight ahead – and that contributes to what makes an exceedingly relaxing gait. If I were going to trust a 94-year-old with the president of the US in any car, this’d be right up there. It would most likely smooth out surface imperfections better were it not on 22in wheels, but you hear, rather than feel, most bad surfaces. And the engine, which has been tweaked up to Range Rover Sport SVR spec with 542bhp, sounds magnificent. 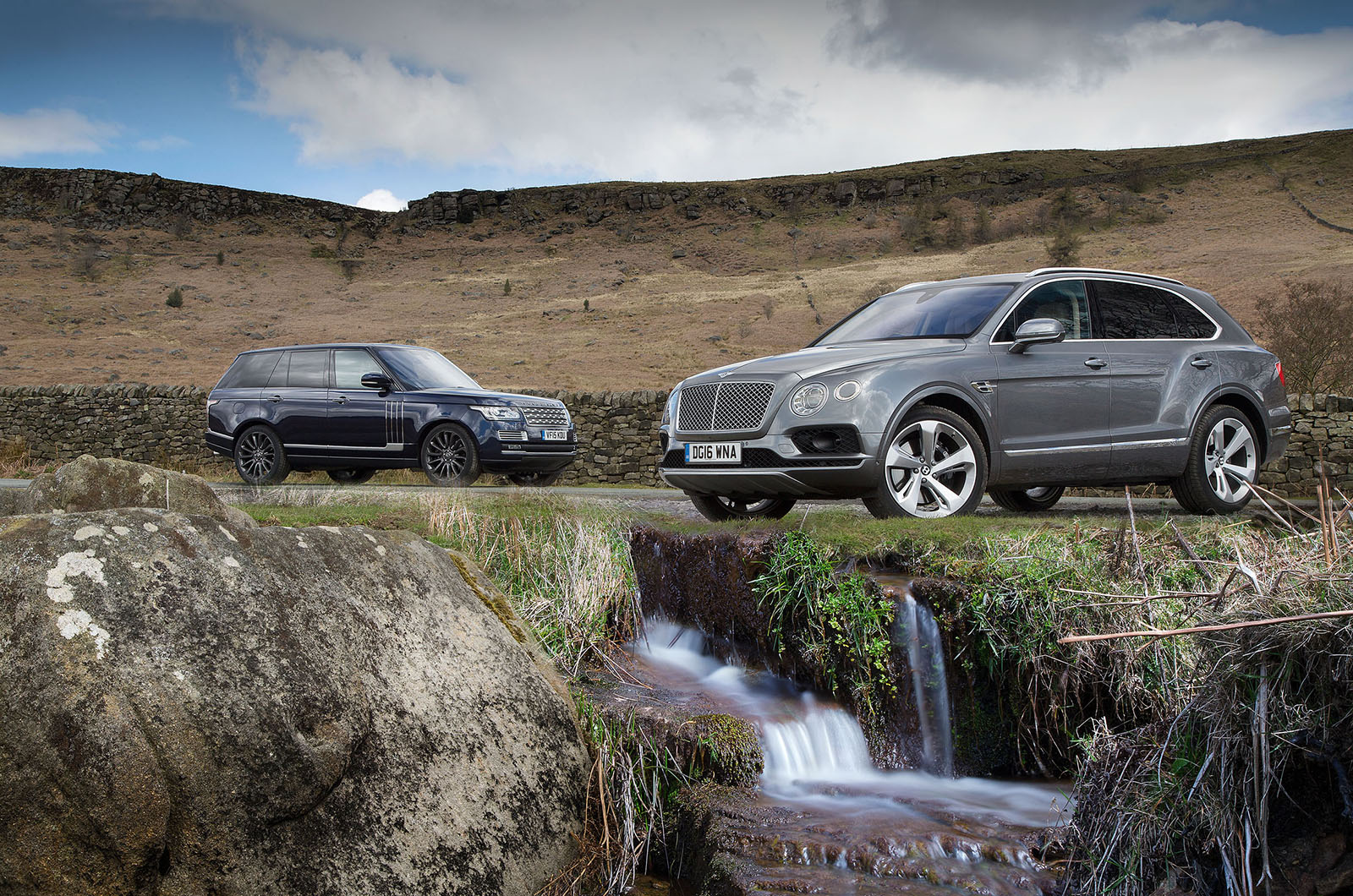 It isn’t as quick as the Bentley, though. There’s a touch of lag at low revs in the Bentayga, but then it really charges. The claim is that, at 4.0sec, it’s 1.1sec quicker to 60mph from rest than the Range Rover. The SVAutobiography’s more immediate, supercharged response doesn’t always make it feel that way, but after a brief turbo spool, the Bentley flies.

To try to manage all it’s supposed to do, the Bentayga gets three chassis modes: Comfort, Sport and Bentley, a recommended middle ground that’s closer to Sport than Comfort. It’s a bit too close for my liking – we’re on 22in wheels again, which probably doesn’t help – but even in Comfort, it can’t deflect bumps quite as well as the Range Rover. It does it well enough, though, and if you ask a lot of it on a winding road, the payback is there. Body control is tight and the steering direct, and although it’s a touch nose-heavy, the way it grips and goes is pretty remarkable. Like the off-road capability, that dynamic prowess probably won’t get put to the test all that often, but it’s good to know it’s there.

Does the Bentayga’s do-everything status compromise it? Undoubtedly. Remove any one of the three things it’s supposed to be – luxurious, sporting and versatile cross-country – and it’d be able to do the remaining two even better. And with a V8, it might sound nicer (it’s unremarkable as it stands) and feel more agile.

But although this might not be the perfect Bentayga, it does enough to see off what is not the perfect Range Rover. Inside, the SVAutobiography feels too Accessorize diamante to be comfortable at £150k, whereas the Bentayga is entirely happy where it is. The Range Rover is a better car at a far more reasonable price. The Bentley is the only – and by definition, best – luxury 4x4. And it’d take an impressive car to beat it.

This article was originally published on 21 May 2016. We're revisiting some of Autocar's most popular features to provide engaging content at this challenging time.

Well if u watch Grand Tour in Germany with these two cars, it explanes it exactly which is the best.

Yes, you're about to read it right - two more metres to stop...

The SVR feels smoother and more agile and the Bentley cannot shake it off on a winding road. In decelerating 100-0 km the Range Rover was clearly superior, the Bentley taking two more metres to stop.
» Drag Race | May 19, 2016 | Autovisie

Strange that you didn't notice the Bentley's brakes, Autocar?