BACK TO ALL NEWS
Currently reading: Autonomous Nissan Leaf: riding in Britain's self-driving trailblazer
UP NEXT
Britain's Best Driver's Car 2020: The main event

The organisers of a record-breaking drive by an autonomous car on UK roads have hailed the event as a major step forward for the technology.

A modified self-driving Nissan Leaf travelled 230 miles from the Japanese car maker’s technical centre in Cranfield, Bedfordshire, to its factory in Sunderland on an trial dubbed the Grand Drive. That route, the longest single journey achieved by an autonomous car in the UK, included B-roads, motorways and challenges such as unlined roads, complex roundabouts, multiple traffic lights and, on motorways alone, overtaking manoeuvres.

The record-breaking run was one of two trials undertaken as part of a £13.5 million development programme called HumanDrive and carried out over 30 months with the aim of creating a more human-like autonomous vehicle (AV) experience. The second trial, a test track-based activity, used machine learning to explore how blending human-like driving behaviour and autonomous technologies can enhance users’ experience of self-driving vehicles.

This work was carried out at the Multi User Environment for Autonomous Vehicle Innovation (MUEAVI) facility at Cranfield University. Leafs were equipped with artificial intelligence systems developed by Hitachi and containing data on previously encountered traffic scenarios and solutions. These formed a ‘learned experience’, enabling vehicles to deal with similar scenarios on the test track – for example, plotting a safe route around an obstacle that felt natural rather than robotic.

The trials were led by Nissan engineers and funded by the government through the Centre for Connected and Autonomous Vehicles (CCAV) and Innovate UK, plus nine other consortium partners. Nissan Japan has pledged to provide funding until 2023. 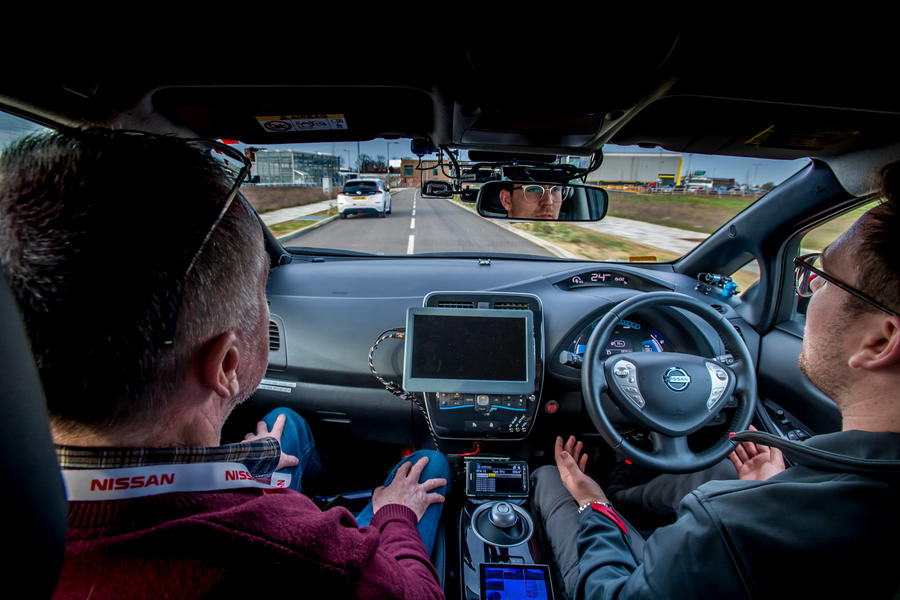 Autocar experienced a 13- mile section of the Grand Drive route – running from Cranfield to a service station on the M1 and back – in an autonomous Leaf similar to the one that completed the record-breaking run. For the first three miles, the car followed a B-road that, during development, had been recreated in the virtual world by a team of engineers at Catapult, the organisation managing the programme.

Details such as broken lane markings, cambers and road signs were all replicated in the model. An autonomous Leaf then drove through the real environment, with its trajectory and behaviour overlaid onto this digital visualisation. Data from human drivers following the same route enabled engineers to compare the cars’ trajectories, with the aim of fine-tuning the Leaf’s autonomous responses to provide a more human-like experience.

During our ride, the Leaf behaved naturally, driving around a parked car smoothly, slowing for corners, holding its direction through changing cambers that might have thrown it off-line, and accelerating and slowing progressively through changing speed limits.

At the end of the road, we approached a complex roundabout above the M1 with multiple traffic lights. With the first set of lights showing red, the Leaf pulled up smoothly before, once they’d changed, pulling away to the next set, also on red. Soon, we were clear to drive down the exit ramp to the motorway and the Leaf gained speed progressively before joining the traffic. Once on the motorway, the car held position but, unlike on the Grand Drive, avoided overtaking.

David Moss, Nissan’s senior vice-president of R&D, said developing a system that feels natural will be key to winning customer support for autonomous technology. He said the focus on improving the accuracy of the sensors means that “our system is much less reliant on road markings. We combined this technology with the way our own drivers performed to give the system more human-like behaviour.

“We won’t be able to map every road in anything like the same detail that we mapped the test route’s first three miles, which is why the machine-learning work at MUEAVI that enables a computer to recall and learn from scenarios will be vital to the system’s development.”

Professor James Brighton, a senior lecturer at Cranfield University’s Advanced Vehicle Engineering Centre, added: “We wanted to make overtaking as comfortable as possible, so we improved forward planning to make the process smooth and secure-feeling.” 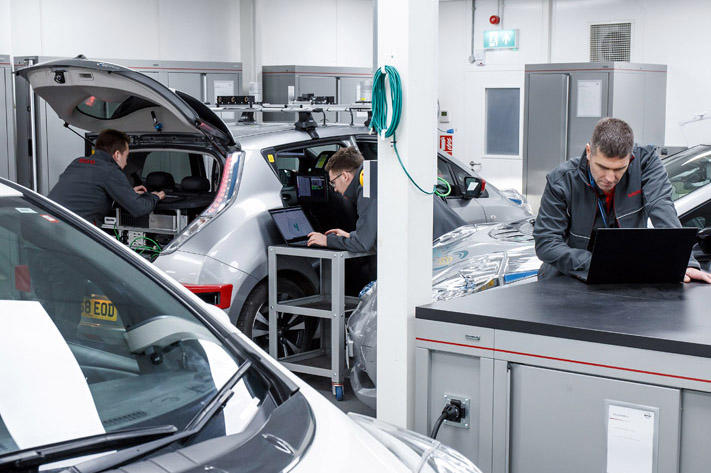 Brighton said that although some autonomous cars overtake in the most efficient manner, it doesn’t feel natural, so “the autonomous Leaf positions itself earlier, follows a more natural overtaking line and leaves a comfortable space between it and the other vehicle”.

Autocar experienced this on the 0.62-mile-long MUEAVI test track, with a car parked at the side of the road. The Leaf began its manoeuvre in ample time and cleared the car with plenty of space to spare. Engineers are still working out how it will make the same manoeuvre in the presence of an oncoming car.

Brighton explained that human perception has played a major part in refining Nissan’s and Hitachi’s AV systems. For example, a narrow width restriction makes drivers slow down automatically, whereas an AV won’t, potentially upsetting passengers. A high-sided vehicle that’s passing will make a human driver instinctively move aside but an AV will continue on regardless.

Brighton said those differences in behaviour mean that, to create an AV that drives like a human, “we had to investigate and consider drivers’ attitudes to a car’s longitudinal velocity and lateral position on the road”.

Moss said the Grand Drive trial was a great success and rejected claims voiced elsewhere in the AV industry that driving around on public roads teaching autonomous systems how to react to situations is dangerous, inefficient and ineffective.

“Safety is our primary concern,” he said. “Over 93% of accidents are caused by human error. The technology we’re developing will make future cars safer while elements of it will soon find their way into our production cars.” 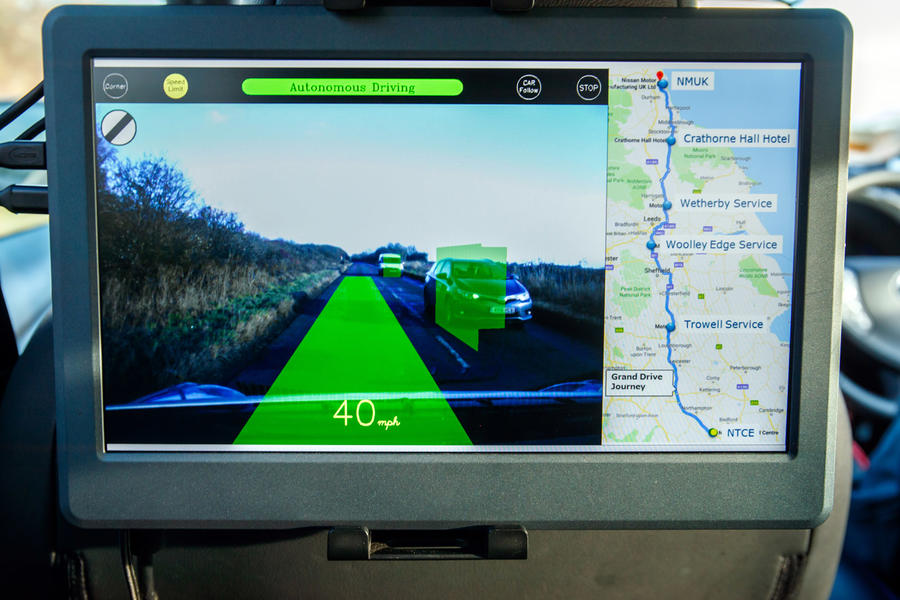 The Grand Drive Nissan Leaf bristles with stereo cameras, laser scanners, a radar and a military-grade GPS system. All feed data to multiple autonomous driving and vehicle control ECUs. The boot is filled with a rack of computer equipment that, Nissan claims, will eventually be miniaturised.

The Hitachi-equipped cars used for the MUEAVI trials have forward-facing stereo cameras working with rear- and side-mounted lidar sensors to provide the richest possible picture.

Behind the scenes, Leeds University used its Virtuocity driving simulator to capture driving style and behaviour data for modelling and refining the autonomous driving controllers to behave in more human-like ways.

be interesting to know the value of the car that was used, including all of the autonomous tech.

This seems similar (ish) to when fuel cell vehicles first appeared as a large Mercedes bus costing x millions, then a Vito van some years later followed by it being finally packaged in an affordable (ish) GLC.

What I mean is that costs will reduce and miniaturisation of the tech will eventually enable it to be packaged in cars realistically.

I don’t really have a feel where we are on this journey with autonomy though and the danger that the required legislation, and who takes responsibility for problems, might render all the tech redundant anyway.

So we currently drive on roads designed and built by humans, in vehicles which are designed by humans, the drivers are pretty much 100% human with all that that entails! however only 93% of acidents are caused by humans. That to me sounds like we are doing pretty well. I guess we can look forward to a time when more accidents are atributed to computers in the future. Can somebody explain to me how designing automated vehicles to drive more like humans do would improve things?

These stories keep turning up.  No mention of how many times the driver intervened, if the car had no steering wheel or pedals then I'd be impressed