BACK TO ALL NEWS
Currently reading: 60 years of the M1: how we covered the opening of the UK's first motorway
UP NEXT
New 2023 Ford Mustang breaks cover in production bodywork

60 years of the M1: how we covered the opening of the UK's first motorway

The “London-Birmingham Motorway” opened for business 60 years ago this year. Here’s what Autocar had to say as the ribbon was cut
Open gallery
Close

Last Friday was exactly 60 years since the opening of the first section of what would later become known as the M1, the oldest ‘motorway’ (first called) in Britain and one of our most historic and beloved roads.

Connecting London to the north of England, the motorway is now an established and even - especially to the jaded commuter - mundane part of our motoring landscape, but travelling along the M1 wasn’t always such an everyday thing. In fact, when the motorway first opened for traffic, its appearance was immensely exciting, and seen by many as a symbol of modernity.

This sense of excitement and anticipation is palpable in a feature on the “London-Birmingham Motorway” in the 30 October 1959 issue of Autocar, just prior to its official unveiling. “On Monday, 2 November, the new Minister of Transport, Mr Ernest Marples, will snip the tape at Pepperstock junction as simultaneously police in radio contact will remove the barriers at all the connecting flyover access points, and traffic will begin to flow up and down the new London-Birmingham Motorway - the M1, as it is to be called,” the piece begins, registering the huge sense of occasion that accompanied the new motorway’s completion. In a wonderfully heady moment, the writer refers to the M1 as “our first real Motorway”.

One of the main reasons the M1 was groundbreaking was because of its scale. Italy had had motorways since the 1920s, but Britain had to wait until nearly 40 years later for its first such road, a motorway which bypassed Preston (and which would eventually be incorporated into the M6). This road, however, was significantly shorter than the M1. To build the longer motorway, roughly 13,000,000 cubic yards of earth had to be shifted, 150 bridges were made, 148 emergency telephones were constructed and over 4500 people were involved to create the iconic road. All these facts were dwelled on in Autocar’s original coverage - far from the everyday road that it’s seen as today, the M1 was a triumph of modern engineering and human resolve.

While Autocar was excited about the M1, however, we also highlighted the importance of caution. There had, we noted, been “too much glamour and talk of ‘throwing open the motorways of Britain.’ We must be rational, and consider the road as what it is - an important start to the provision of a network of modern roads in Britain.” 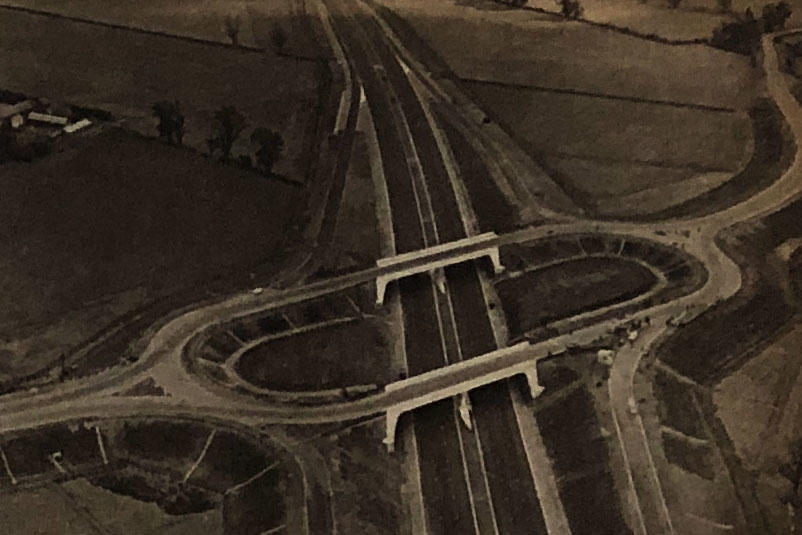 This note chimes with a similar one sounded by Ernest Marples, in his speech at the opening of the road: “This motorway starts a new era in road travel. It is in keeping with the bold, exciting and scientific age in which we live. It is a powerful weapon to add to our transport system. But like all powerful instruments it can be a power for good or evil.” He emphasised that drivers must “use discipline, common sense and obey the rules,” or else risk “disaster and tragedy”.

As well as celebrating the motorway, then, a large part of our coverage was also centred around explaining the road and advising drivers how to use it efficiently and safely.

“At the terminal roundabouts drivers will simply feed into the appropriate carriageway,” we wrote, “accelerate to a cruising speed happily within the car’s capabilities, and sustain it until the opposite terminal is reached, or until some earlier access flyover if the driver wishes to leave the Motorway before the end. Joining and leaving at flyover access junctions is equally simple, but requires some explanations. 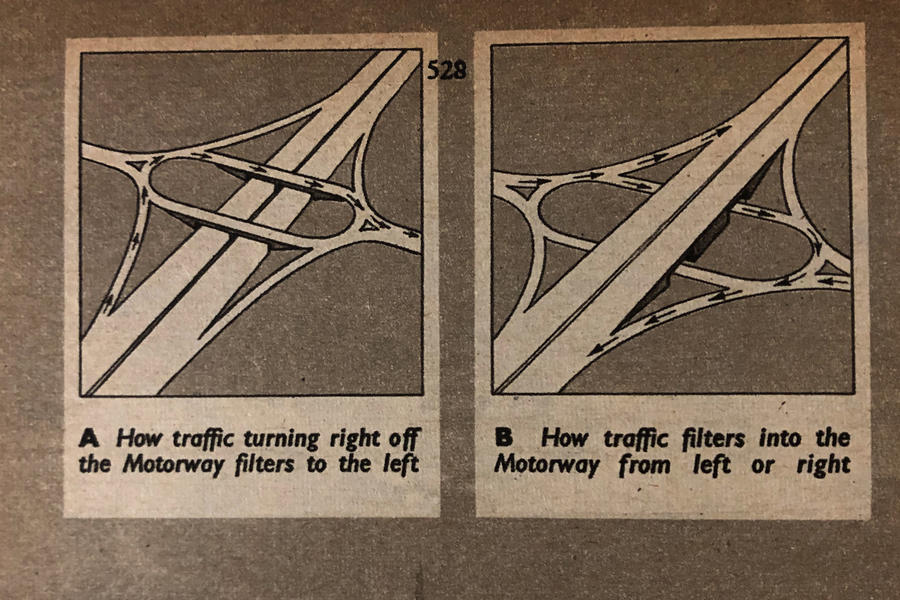 “Second, one never makes a turn. The accent is on filtering, and the ramps join and leave the main carriageways at a gentle angle. They should be entered at speed, and braking (while leaving) and acceleration (while joining) should be done on the main carriageway every time it reaches a flyover-access junction, though drivers will be well advised - particularly in these early months - to be prepared for inexperienced drivers who may brake unnecessarily before filtering away, or who may filter in while travelling much too slowly. Diagram B shows how traffic joins the Motorway by the same filter ramp, regardless of the previous approach direction.”

Of course, in 1959, there were no sat-navs, so a sharp memory was paramount if you didn’t want to miss your junction and have to keep on driving in the wrong direction until the next flyover. Autocar advised drivers to “memorize before they start the road number of the flyover at which they must filter out. For a driver who misses his filter ramp there is no stopping, reversing or turning round: he must press on to the next flyover, filter out, go round the roundabout, filter back on the other carriageway, and return to the one he has missed.” Drivers also needed to check they had enough petrol for their journey before joining the motorway - for, when the M1 first opened, petrol stations serving it had not yet been built - as well as keeping a close eye on their tyre pressures, which were crucial given the relatively high speeds cars would be travelling on the newly-built road. 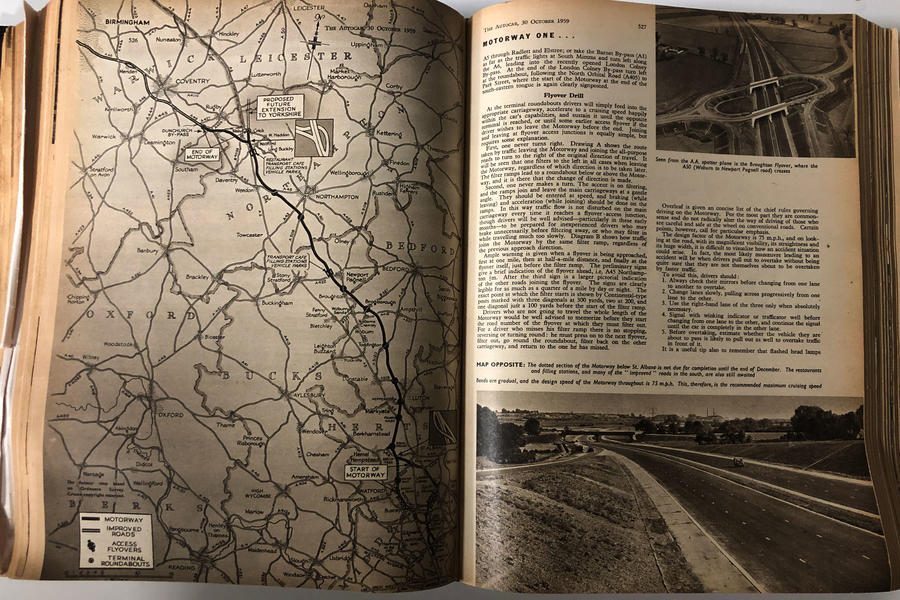 Despite this close focus on educating drivers, Autocar was upbeat about the motorway’s prospects.

“The table below gives an idea of the gains and losses of distance and time when the Motorway is used between key points. The times given are pessimistic because an average speed of 50 miles an hour has been taken as the mean speed for cars on the Motorway; in fact they are likely to be higher, and it is probable, judging by Continental motorway experience, that many drivers will regularly take little more than an hour to cover the 69 miles.

“More important than the saving in time will be the reductions in accidents, vehicle wear, fuel consumption and nervous energy on the part of the drivers. With modern vehicles, sustained cruising at a reasonable speed is far less wearing on all components than normal stop-start driving on all-purpose roads.”

We concluded: “The benefit of the Motorway will not be appreciated in full until the northern section from Crick to Doncaster is built. Work is in hand on the bridges for that road already, but the carriageways are awaiting the final planning authorisation. We trust that Mr Marples will make this one of his most urgent responsibilities.”

The day Jack Sears hit 185mph on the M1 motorway

How Autocar writers would fix Britain's roads and transport

Notes from a 10-car motorway pile-up - does emergency braking work?

No change there, then

Looking at that top pic, interesting to see that middle lane hogs aren't a recent phenomenon.