BACK TO ALL NEWS
Currently reading: Audi reveals new e-tron Vision Gran Turismo
UP NEXT
Analysis: Why the decline in diesel sales has slowed in 2022

Audi has revealed a new four-wheel drive 805bhp electric-powered supercar to be deployed as a race taxi at selected Formula E events, hinting the low slung two-door holds clues to a zero-emission flagship being considered as a performance figurehead to sit above the company’s recently confirmed four-door e-tron GT in an extended line-up of pure electric production models due out in the coming years.

Originally conceived as a virtual race car for the 15th anniversary of the Gran Turismo video game on Sony’s PlayStation 4, the e-tron Vision Gran Turismo has been turned into reality by Audi as part of a marketing campaign built around its new e-tron electric car sub-brand.

The one-off prototype, constructed at Audi’s pre-production workshop in Ingolstadt, is planned to be used to provide selected customers and guests of the German car maker with high-speed passenger rides during Formula E race weekends, starting at the Rome event in Italy on April 14. 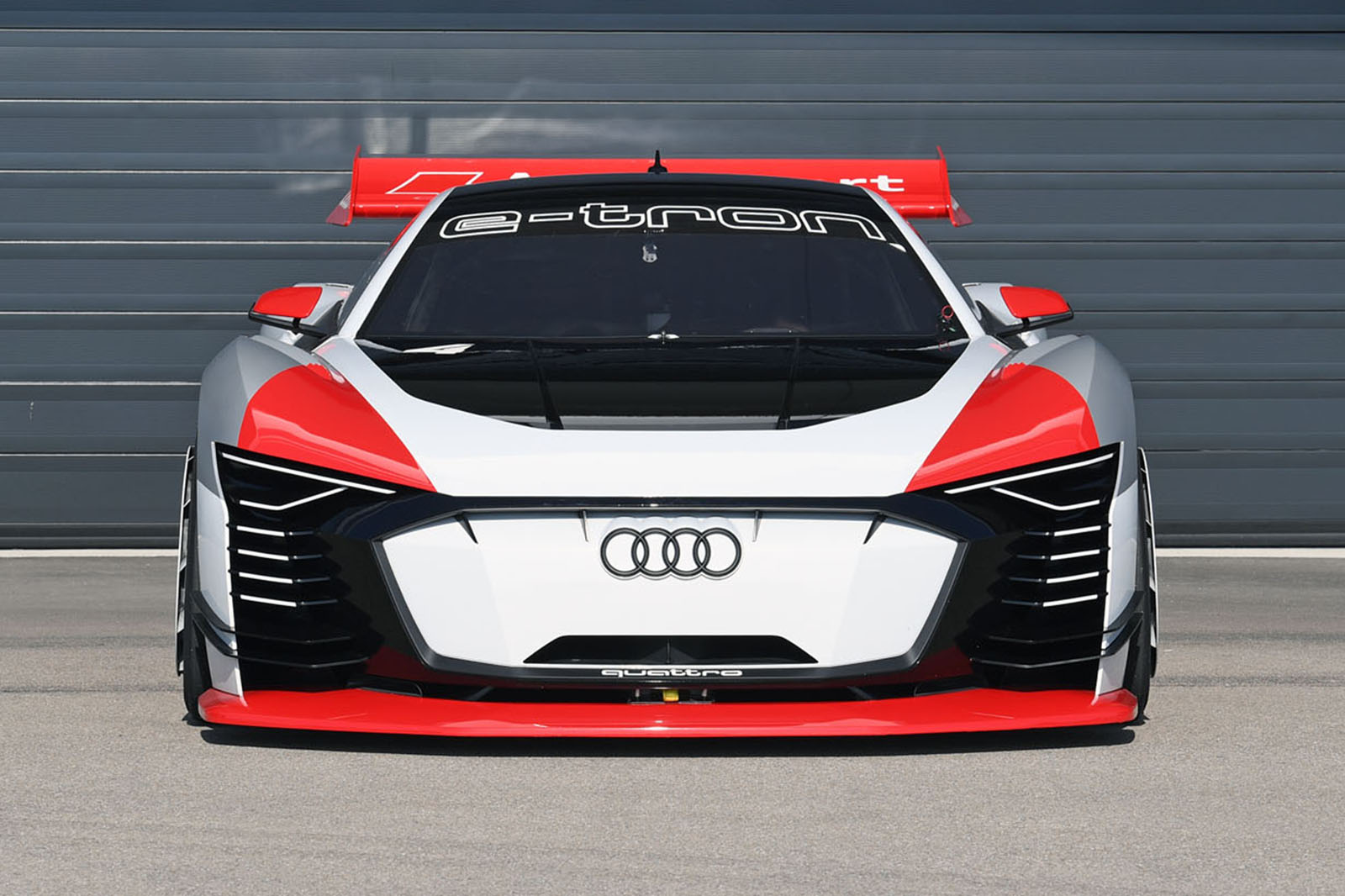 The decision to build the electric powered supercar makes the e-tron Vision Gran Turismo the first simulated race car developed for Playstation’s Gran Turisimo to be made fully functional, according to Audi.

It also hints at possible plans by Audi to bolster its presence in the supercar ranks with a new performance-based e-tron model that, Ingolstadt insiders suggest, could complement the R8 with pure electric drive.

“With the Audi e-tron Vision Gran Turismo race taxi we are turning electric mobility into a tangible experience for our customers and guests as part of the Formula E races – in the middle of the world’s metropolises,” says Peter Mertens, head of Audi R&D, adding, “we are also expanding our gathering of valuable experience in extremely demanding conditions”. 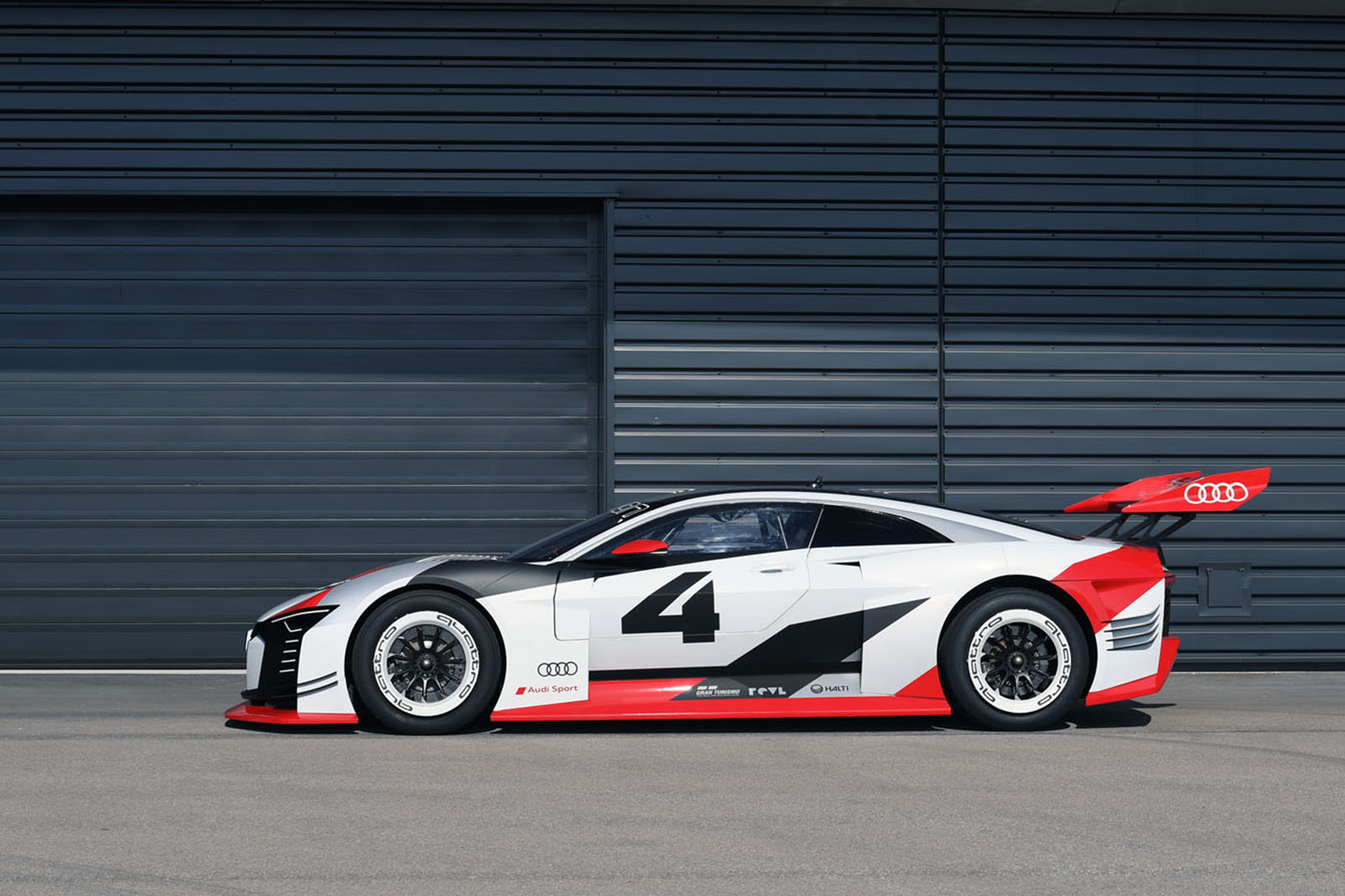 The e-tron quattro, a Telsa Model X-rivalling SUV, and e-tron Sportback, a high riding five-door liftback, are planned to be produced at the company’s plant in Brussels, Belgium, with the former set to go on sale during the second half of 2018.

The more exclusive e-tron GT is set to roll out from a dedicated production line being established at Audi Sport division’s showcase Bollinger Hof factory in Neckarsulm, Germany, with the first customer deliveries planned for 2020. 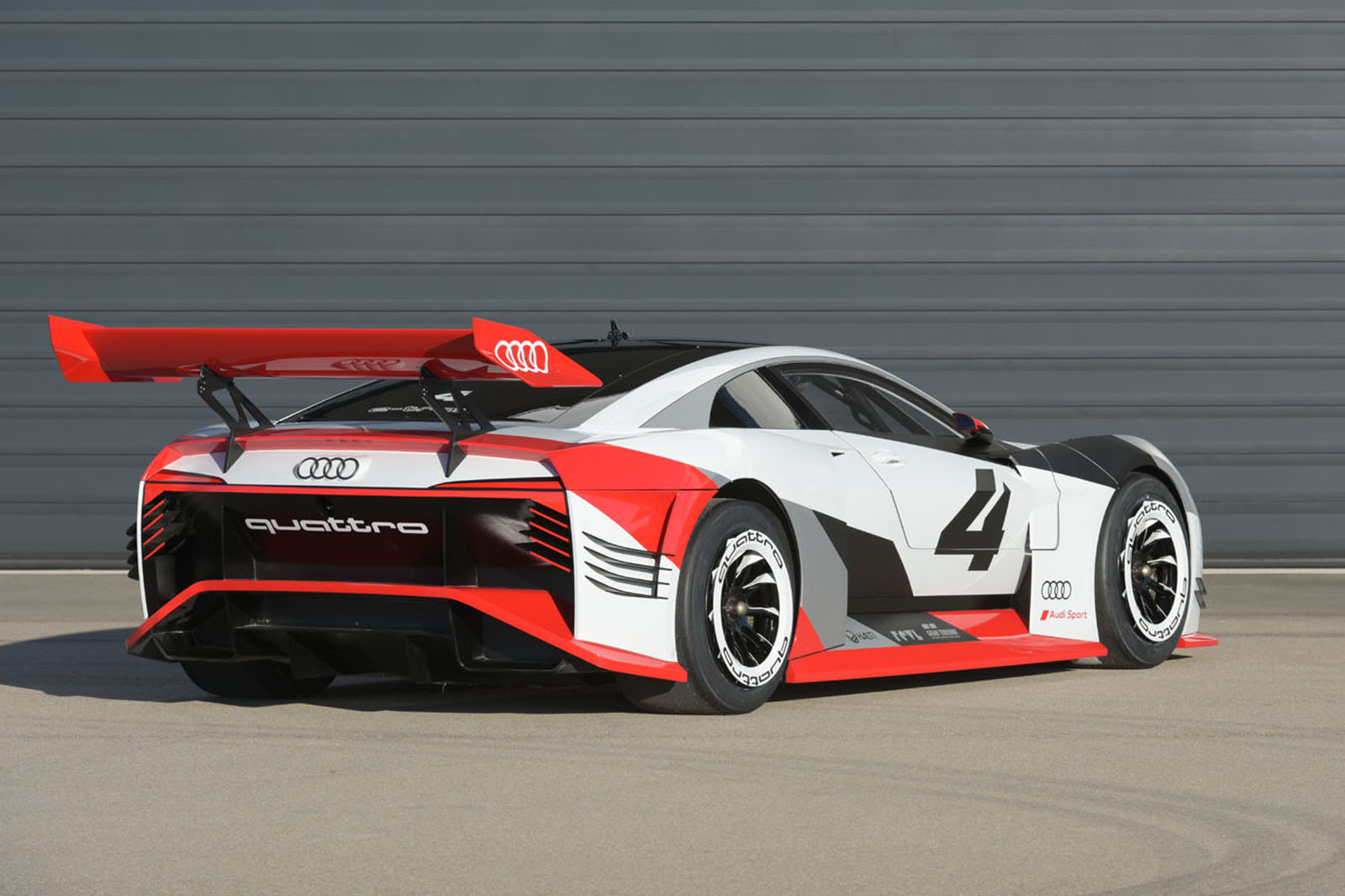 Backing up claims that the e-tron Vision Gran Turismo could one day see production are comments from senior Audi officials that it represents more than a mere concept.

“Although the design of a virtual vehicle allows greater freedom and the creation of concepts which are hard to implement in reality, we did not want to put a purely fictitious concept on wheels," says Audi design boss, Marc Lichte. 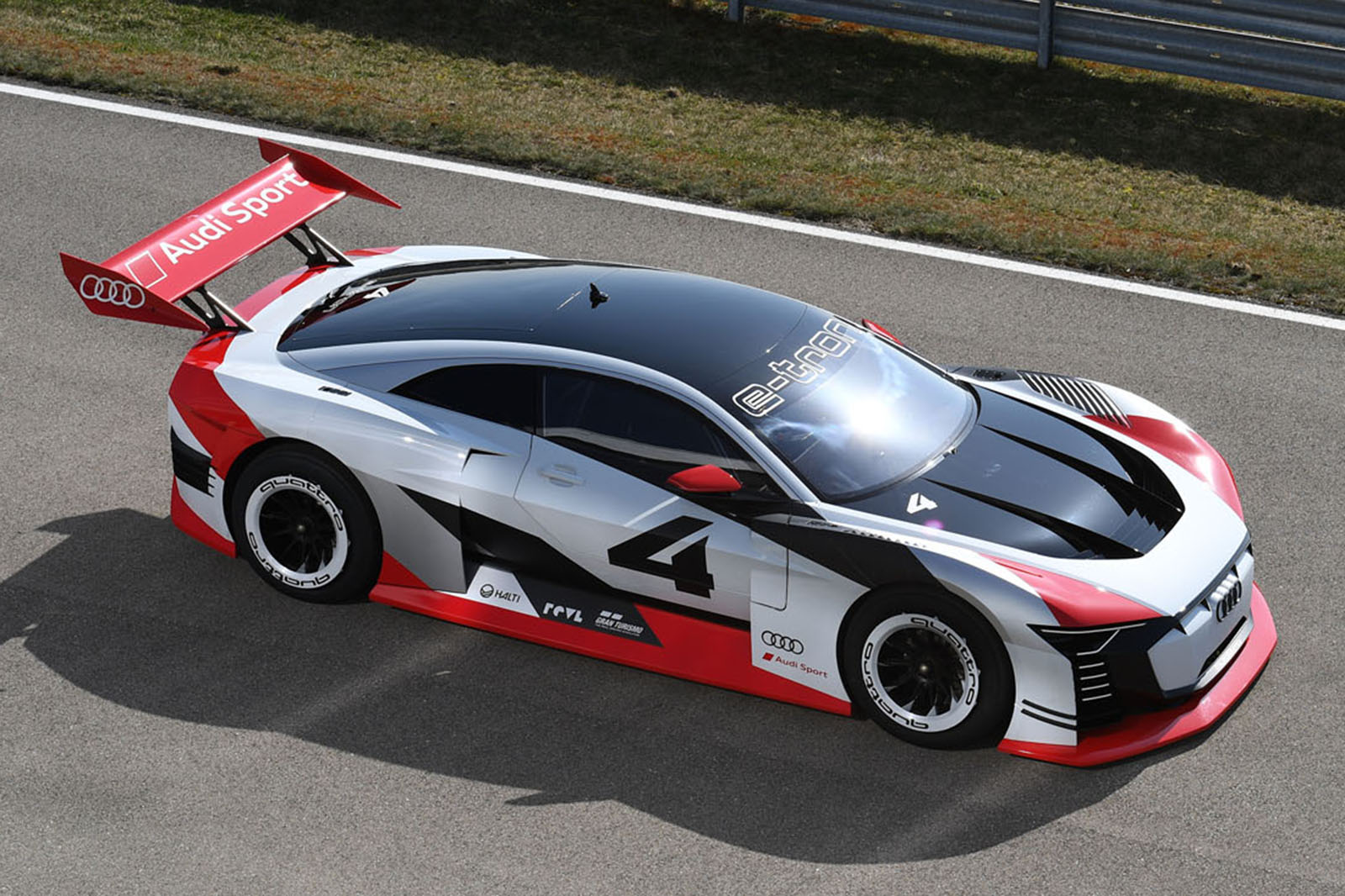 Drawing on technology used by the ultra-low-volume R8 e-tron as well as the three upcoming e-tron production models, the e-tron Vision Gran Turismo is powered by three electric motors - one sited up front providing drive to the front wheels and two at the rear driving the individual rear wheels - each with 200kW, or 268bhp.

The electric motors used by the new supercar are based on the production unit set to be unveiled in the upcoming production version of the Audi e-tron quattro. Developed in-house at Audi parent company, Volkswagen, they are produced at its plant in Kassel, Germany.

Altogether, the three electric motors provide a combined 805bhp - sufficient, according to Audi, to provide its new 1450kg coupe with a power-to-weight ratio of 555bhp per tonne. 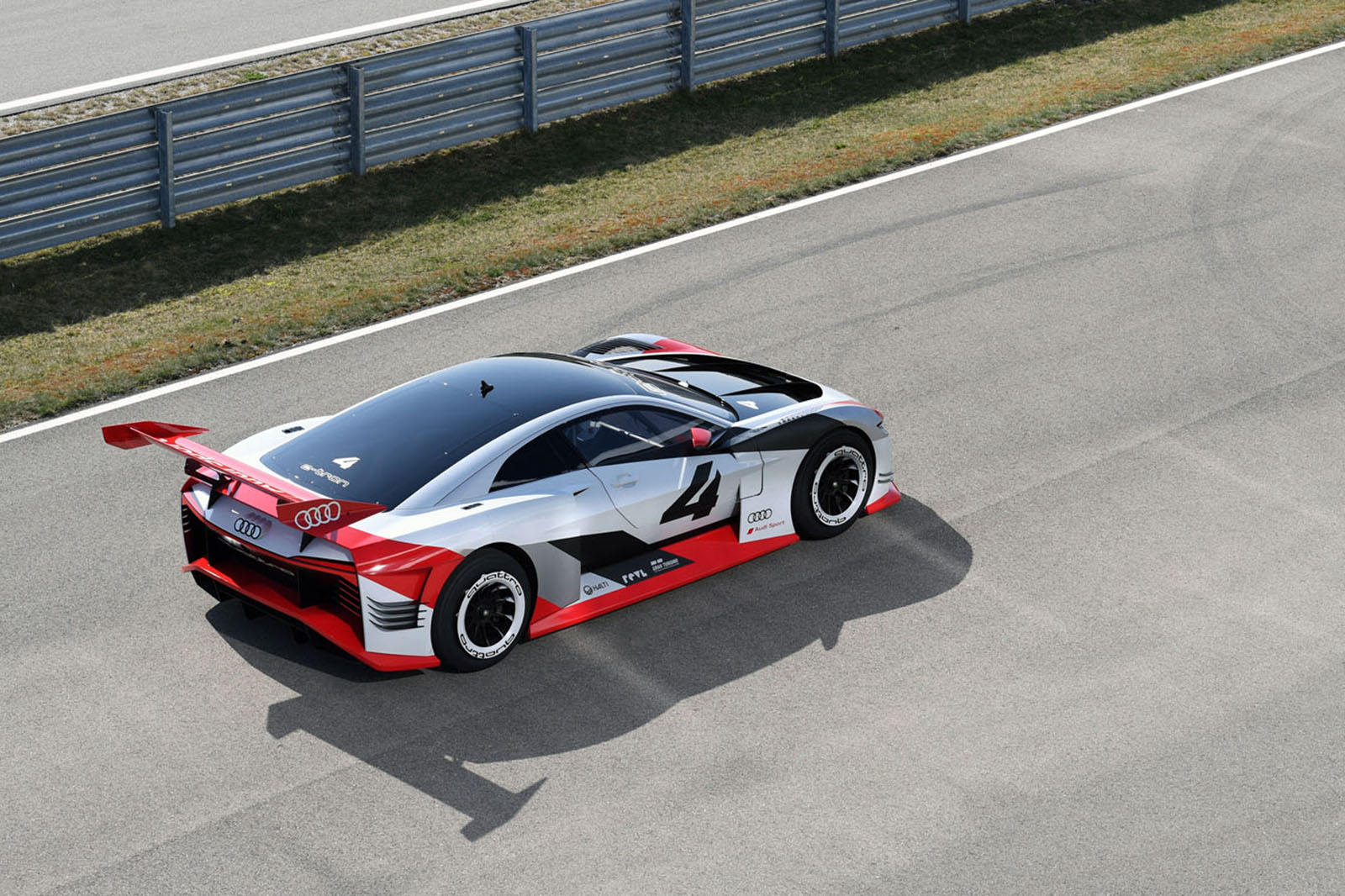 No official torque figure for the new Audi prototype has been revealed, though officials from Audi’s pre-production workshop have revealed to Autocar the trio of electric motors deliver more than 1000Nm, which translates to over 737 lb ft.

With a specially developed quattro four-wheel drive system providing variable drive distribution between the front and rear axles as well as the individual rear wheels, the e-tron Vision Gran Turismo is claimed to accelerate from 0 to 62mph in 2.5sec.

By comparison, the 1840kg R8 e-tron, which was revealed in definitive production guise at the 2015 Geneva motor show prior to being dropped from the line-up after an unspecified production run, boasted two electric motors acting on the rear wheels with a  combined 455bhp and 678lb ft. 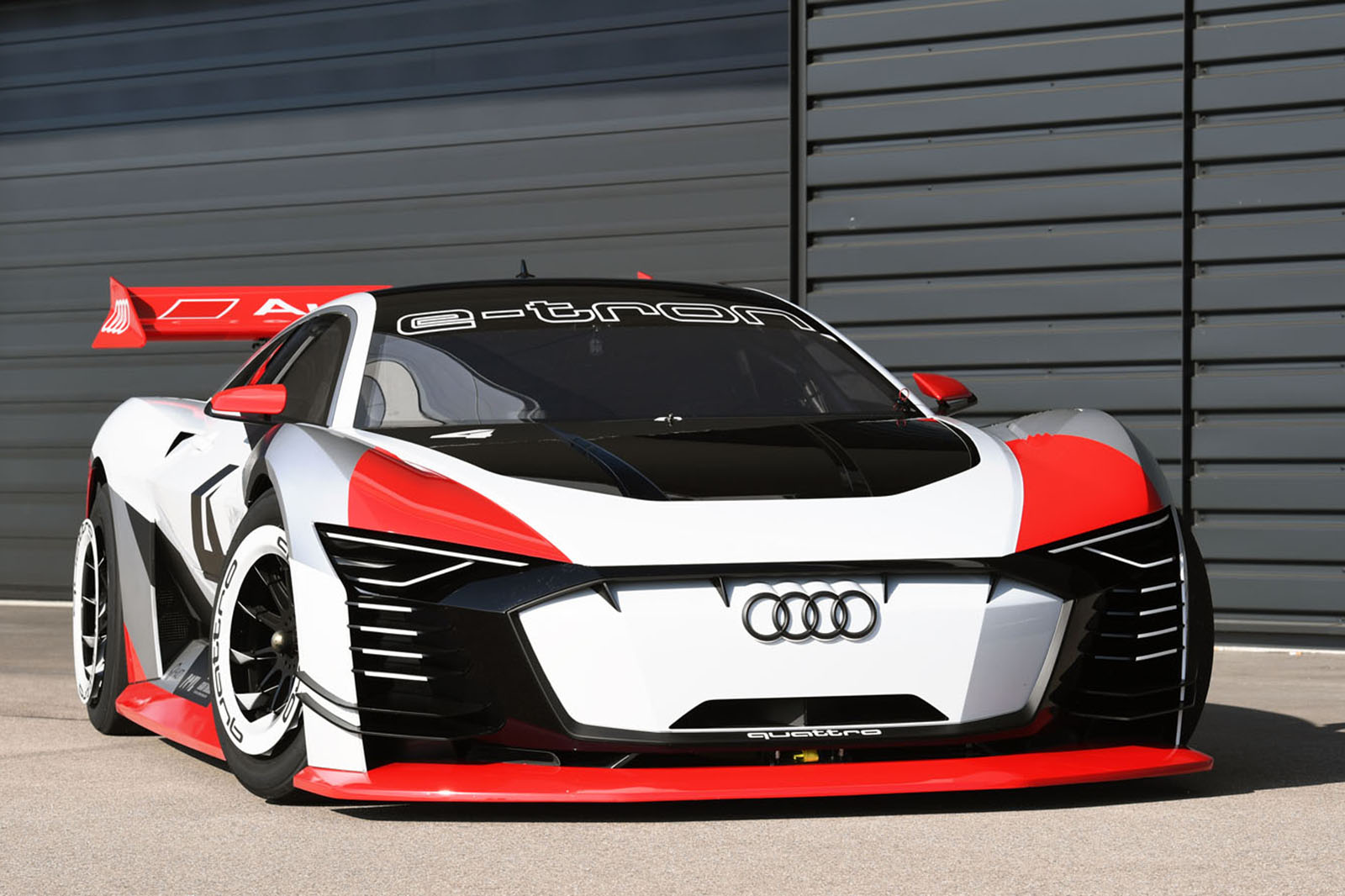 Audi is yet to provide details to the battery used by the e-tron Vision Gran Turismo, although Autocar has been told it shares its technology with the lithium-ion unit planned to appear in the production version of the e-tron quattro due out later this year.

Among those Audi has chosen to drive the e-tron Vision Gran Turismo on the sidelines of Formula E races is former DTM race driver Rahel Frey and Le Mans victor Dindo Capello.

If the future of Formula One were electric

Teams vying to bring pitstops down to under two seconds hours.

Teams vying to bring pitstops down to under two seconds hours.

Well, that's the limitations of the Autocar website for you.  Strikethrough doesn't register.  Just imagine there's a line through "seconds".  It's easier than imagining a successful future for electric cars.

done in the style of Japan

done in the style of Japan Super GT cars of the 15 years ..