BACK TO ALL NEWS
Currently reading: Aston Martin Vanquish Zagato Volante and Speedster spotted testing
UP NEXT
Sorry, wrong number: the forgotten problem of car clocking

Aston Martin is adding the finishing touches to its limited-edition Vanquish Zagato Volante and Speedster models, ahead of planned customer deliveries next year.

The two drop-top versions of the Vanquish Zagato coupé will be produced in partnership with world-renowned Italian design house Zagato in a total of just 127 units: 99 Volantes and 28 Speedsters.

The Volante gets a folding soft-top and the Speedster (pictured below) ditches a roof altogether, in a similar vein to the Aston Martin DB AR1 of 2003. The models also clearly take influence from the Aston Martin Vulcan, One-77, CC-100 and DB7 Zagato. 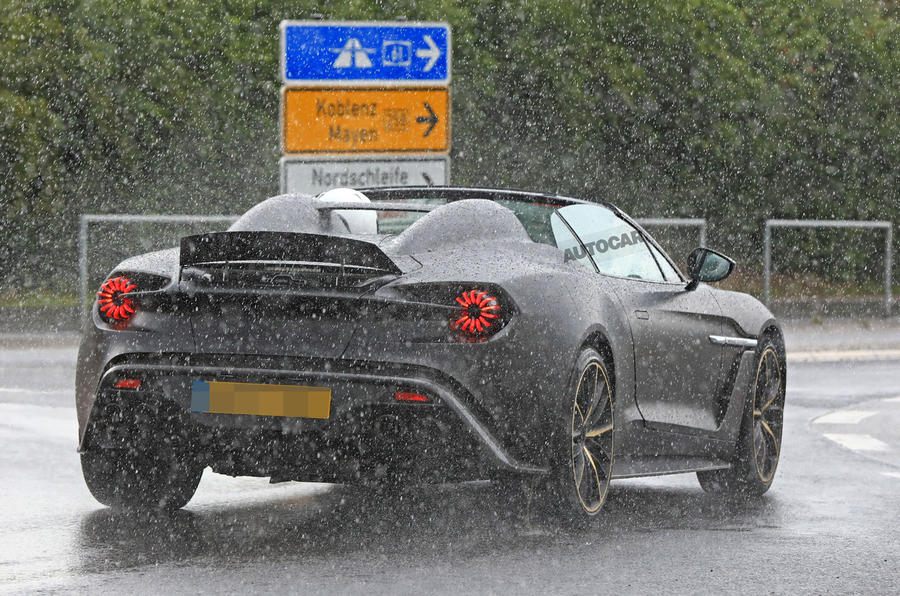 First sightings of the models undergoing pre-production testing in the rain suggest Aston Martin used the time to assess waterproofing and, in the topless Speedster, the cabin's weatherproofing.

The limited-run V12 models use the same naturally aspirated 5.9-litre engine as the Vanquish Zagato coupé, with a maximum power output of 592bhp - 27bhp more than the regular Vanquish.

The Zagato Volante can sprint from 0-60mph in 3.7sec, but losing the convertible roof in the Speedster would decrease this time. Top speed will be about 197mph.

The Speedster will command the highest price, at about £1.3 million; the Volante is expected to cost more than £500,000. Of the 28 Speedsters to be made, just seven are destined for the UK.

How long has Zagato been a sub-brand of Project Kahn?
jer 2 May 2017

Convertible is a bit challenging but thats the idea with Zagato's the idea that in the next 50 years it will at some point be tasteful.
Symanski 2 May 2017

I *love* Aston Martins. But Zagato is definitely beyond it's sell by date. The DB4 Zagato is beautiful, alas everything since just living off the name. A pastiche of themselves, and Aston.