BACK TO ALL NEWS
Currently reading: Alpine A110 first ride: will it be a Porsche 718 Cayman beater?
UP NEXT
Ford backs call for European ban on new ICE cars from 2035

We’ve seen the Alpine A110 production car – the model that revives the famous Alpine name – on the show stand at Geneva and we’ve learnt all about its technical specifications, but we won’t actually drive the car until October. However, I have just spent a day riding in it at Renault’s Aubevoye test facility in the north of France.

Before I was allowed to belt myself into the A110’s fixed-back bucket seat, Chief Engineer David Twohig and Product Planning Director Eric Reymann took a few minutes to set the scene. "We started doing some customer clinics as far back as 2012," says Reymann, "first with pure car guys, people who owned specific Porsches, Caterhams or Lotuses, and then with everybody else. We found there was an appetite for a sports car that could be comfortable to use every day, but that was also fun on the circuit."

"We wanted to build a car that was a pleasure to drive on the road at 40mph," adds Twohig, "but still bloody good when you go and do a track day every couple of months." From there, Twohig and his team defined the A110’s technical specifications, placing lightness front and centre.

"If the car is light,’ he continues, "that allows you to bring the spring rates down, so you don’t have a super stiff car that’s a pain to drive every day. That’s why the A110’s body is made from aluminium.

"The second important thing is the suspension set-up. We’ve got double wishbones all-round, which is very unusual in this class. The 718 Cayman, for instance, has MacPherson struts on its front axle."

It’s worth revisiting chapter one of the vehicle dynamics textbook here, because those double wishbones, as well as the lightweight build, really do underpin every one of the A110’s dynamic characteristics. Double wishbones allow the engineers to control wheel camber in hard cornering, whereas a less sophisticated strut arrangement does not. By controlling wheel camber, you’re keeping the tyre contact patch flat to the road surface, rather than allowing it to ‘fall over’ into positive camber, where it can’t grip effectively.

In a car with strut suspension, that can be achieved by fitting whacking great anti-roll bars to stop the body from leaning over in a bend. But that simply ruins the ride quality.

Let’s dive a little deeper. The A110’s suspension arrangement, says Twohig, gives it best in class camber linearity. That makes it progressive at the limit rather than spiky and unpredictable. Furthermore, in really hard cornering, the toe angle adjusts to slight toe-out, which gives gentle understeer characteristics, meaning there’s a safety margin built in. The basic chassis balance can therefore be tuned to be quite neutral, or even oversteery. All of that makes for a car that’s fun and adjustable at low and medium speeds, while also being stable and secure at high speeds. We call that the Holy Grail.

It’s worth noting, though, that double wishbone suspension isn’t without its drawbacks, mostly relating to packaging. A strut arrangement would have enabled a bigger front storage compartment. It’s encouraging to know Alpine’s priorities are as they should be.

There aren’t many people on this earth better equipped to demonstrate the A110’s dynamic ability than Laurent Hurgon, and there can’t be many better places to experience the car right on the limit than Aubevoye’s high-speed test track. Hurgon, the French racing and development driver, pilots the A110 with such commitment and ability around the flowing track – which links terrifyingly fast bends with tight, complex corners – that I can hardly believe I’m riding in a car so dainty and benign looking. This thing feels like a wild animal. 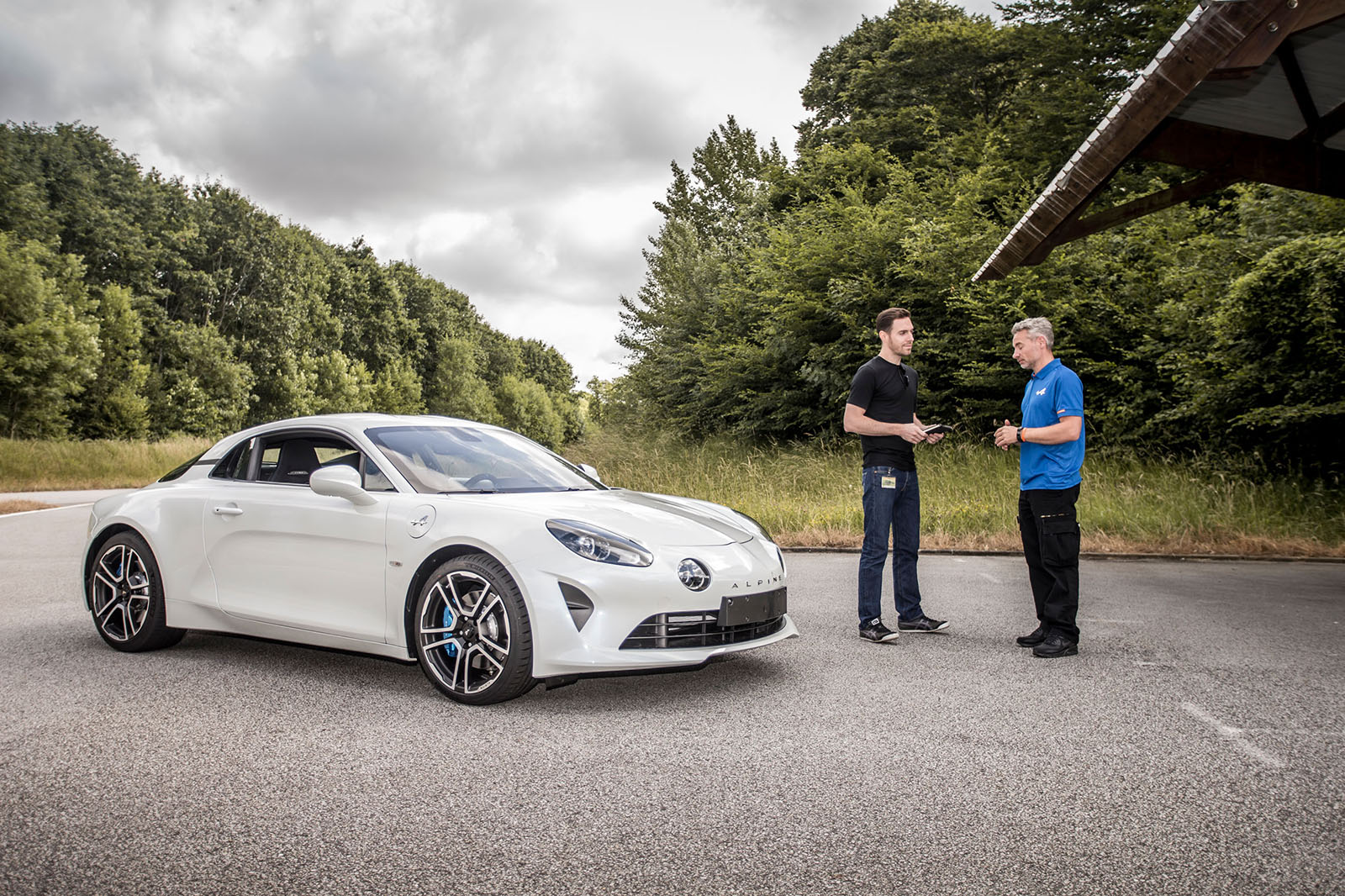 Straight-line performance is strong and there’s even an authentic sports car soundtrack to go with it, while the double-clutch gearshifts feel sharp and snappy. The Track ESC mode allows a certain amount of slip – enough that the car will drift slightly in low-speed corners but not beyond that – and with the systems switched off entirely, the car will hold long, lurid and very progressive slides. It also feels amazingly agile and responsive in direction changes while being safe and stable at high speed.

Over rougher sections of the test facility – by which I mean surfaces that would cause many cars to leap clean over the perimeter fence – that pliant ride quality is very plain to see. I don’t know of many cars that combine body control and ride quality as well as this.

Does any of that actually make the A110 fun to drive? We won’t know until we drive the car later in the year. I am now more confident than ever, though, that the Alpine will have what it takes to give the mighty Porsche 718 Cayman an equally mighty scare.

Weird that car-lovers get so negatively protective about brands. I mean, if you love cars, why wouldn't you celebrate Alpine having the balls to build what could be a great driver's car and challenge the establishment? Why worry so much about the badge on the car? It's just a car..

Having said that, this thing looks like a handy peice of kit. Could do with being £30K mind.

Does it need to beat the

Does it need to beat the Cayman? The fact that there will be a genuine alternative is worthy of celebration, provided that it is good enough to be an alternative, which it certainly appears to be so far. Fingers crossed.
Russkyh 6 July 2017

The first production run models of these sold out in hours and most people who bought them did so to add to their current collection of cars. Most customers already owned Porsches etc and this car just adds something different. It's only ever going to be a limited model run and I'm sure that Renault aren't looking to suddenly topple established rivals. The Alpine brand adds something a bit more special to the Renault/Nissan Alliance which obviously already has Dacia, Lada, Abtovaz, and recently Mitsubishi worldwide. The fact that Renault are happy to invest millions in development costs in a limited models just shows their desire and commitment and demonstrates what a great position they are currently in compared to years gone by. People will buy it because it isn't a Porsche/MX-5/TT/GT86 etc. They are almost common now due to PCP's etc
View all comments (16)