BACK TO ALL NEWS
Currently reading: Alpina at 50 - how to improve on BMW's finest work
UP NEXT
New Mercedes-Benz EQA revealed as sub-£40k electric crossover

Alpina at 50 - how to improve on BMW's finest work

For 50 years, Alpina has been making good BMWs even better, and it isn’t about to rest on its laurels
Share
Open gallery
Close
Share story

Even for a company that has a history of doing things a little differently, Alpina’s recent 50th birthday celebrations were a bit out of the ordinary.

The specialist manufacturer closed its factory in Buchloe, Bavaria, for a full week. Around 400 guests turned up every night for a string of lavish dinners, and the plant gates were thrown open on a Sunday afternoon for anyone to have a look at the facility and the 20 or so classic models dotted around the place.

It was a confident statement from a family firm that is in a good place. In 2014 Alpina’s 220 staff enjoyed the firm’s strongest sales year yet, with more than 1700 cars delivered globally – and although the volumes are expected to shrink a little this year (a result of the 3 Series being facelifted and the 7 Series being replaced), the company’s turnover should rise again.

The close relationship with BMW – still unique in the car industry – is as strong as ever. Started when Burkard Bovensiepen developed a twin-carburettor kit for his BMW 1500, the partnership now operates on a rolling five-year deal and includes assembly on BMW’s own production lines and its dealers honouring Alpina’s warranty.

It’s a business arrangement – Alpina is charged a storage fee for any parts batches that turn up outside of BMW’s ‘just in time’ production process – but it’s very strong. BMW feeds Alpina’s engineers CAD data on upcoming models more than four years before they start production, after all.

And yet for all this stability, there is a feeling of transition at the company. Bovensiepen is a sprightly 79-year-old who still lives in a house on the factory site (the hot gas from one of the engine dynos heats his pool). He splits his time between maintaining what he calls the “fundamental  basis of trust” between Alpina and BMW and finding new product for his fine wine business.

But he has recognised that a longer-term management plan is required, so his sons Andreas (Andy) and Florian now have senior roles. Crucially, they have a majority vote between them, with the potential to overrule their father if they see fit.

It has been used a few times already, too – most notably with the XD3, Alpina’s first SUV, which went on sale last year, much to the annoyance of the company founder. “To start with, my father wanted nothing to do with the project,” says Andy with a wry grin. “He doesn’t like dirty cars, let alone the idea of an SUV. Then he said he would try it after all. Now all he’ll say is that it’s better than he’d expected…”

The car has been a sales hit for Alpina. Production figures were hampered by a shortage of capacity in Bavaria – not to mention the extra logistics involved in producing the car on BMW’s line in North Carolina – but they’d have sold more if they could have made them.

The next major step will be an entry to the Chinese market, due next year – although if major manufacturers find it difficult to set up operations in the region, you can imagine what it’s like for Alpina. “Our biggest challenges are the  taxes on engine sizes and what we do with local production,” says Andy. “We’ll probably do a different version of our B7 (7 Series) for China, so while European and American cars will be 4.4 litres, we’ll do a 4.0-litre Chinese edition to help with the taxation.”

That principle could extend to a straight six version of the 5 Series-based B5, although the complex Chinese business regulations hurt the bottom line. “The rules say that if we build that car in China, we’d have to share the profits not only with BMW but also with Brilliance [BMW’s local partner],” Andy sighs. “It’s hard enough to make a profit as it is, without dividing it up further.”

That focus on the bottom line comes across frequently, in fact. Alpina invests about €10 million (£7.1m) in each new model line, through powertrain development, chassis tuning, aerodynamic research and marketing. So it needs to extract the maximum from every commitment it makes. Indeed, Andy suggests that one of the UK’s most popular Alpinas in recent years, the four-cylinder diesel D3, contributed far more to the sales volumes than it did to the coffers. 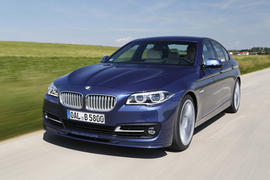 Anniversary edition of Alpina's hot 5 Series gets 591bhp and can hit 204mph. Is it now a match for a Panamera Turbo?

“There was an opportunity for us to do the four-cylinder diesel with the E90 [previous] 3 Series,” he says, “and we did a single-turbo and then a twin-turbo version. But now with F30/F31 [current 3 Series], BMW is using a hot four-cylinder turbodiesel itself – and while we could take that and have up to 250bhp, it would be expensive to produce and then to sell.

"To be honest, that was the problem with the four-cylinder before. We tried to do something on price and we know it was popular in the UK, but with the strength of the pound it was hard to make any money on it.

“We’ve looked since then at a new cheaper model, but our customers are quite clear on what they want. They don’t want front-wheel drive. They don’t want an Alpina version of the Active Tourer. Those things just aren’t going to happen. There is some interest in the existing 2 Series, but only in the coupé – and that makes it hard to justify for us.”

The focus, then, will continue to be on higher-end models. And although the patriarch may not like it, they  will probably include more SUVs.  “I think it’s likely,” says Andy. “If that’s where the market is going, then we have to look there. We haven’t decided whether to go for the X4 or something larger, though.”

Expansion will require greater capacity, and a spare patch of land at Buchloe has already been earmarked as a potential new manufacturing site. The thing is, though, every Alpina still comes with a dash-mounted plaque proclaiming that the firm specialises in “production of exclusive automobiles”. So at what point does it stop being exclusive?

“We have more head room yet,” says Andy. “Rolls-Royce made more than 4000 cars last year, so we joke that we’re more than twice as exclusive as them. But I think that we could make 2000 or even 2500 cars per year and still our customers would consider us exclusive, as long as we keep giving them a different sort of car and experience.”

Six of the best classic Alpinas

Alpina led the development of this famous homologation special at BMW’s request — and built 13 examples in its own specification.

Imagine a 635 CSi but with a turbocharged straight six and up to 326bhp, depending on how you twiddled the boost knob between the front seats.

This astronomically expensive two-door had a V12 engine with 410bhp and with a manual gearbox.

This astronomically expensive two-door had a V12 engine with 410bhp and with a manual gearbox.

Alpina sold more than 10% of BMW’s entire production run of the Z8 — and gave itself a great start in the US market as a result.

One of the classic BMW shapes, enhanced by Alpina’s classic alloy wheels and an uprated V8 with 370bhp.