BACK TO ALL NEWS
Currently reading: All-new entry-level McLaren to be 600bhp-plus V6 PHEV
UP NEXT
New 2022 BMW 3 Series brings redesign and tech upgrades

McLaren will transition to an electrified era in earnest next year with the first truly all-new series-production car since the 2011 MP4-12C – and it’s a plug-in hybrid.

The new model will be launched in the first quarter of next year and go on sale in mid-2021. It will serve as a replacement for the long-established Sports Series range, which includes the 540C, 570S and 600LT. That range will end with the imminent introduction of the GT4-racer-inspired 620R.

The Woking-based maker will move instead to what it calls the High Performance Hybrid (HPH) sub-category, positioned between the McLaren GT and current crop of Super Series models. The new car will effectively replace the 570S, but its price is expected to rise above that of today’s Sports Series cars.

As well as using ground-up new carbonfibre-rich underpinnings, the as yet unnamed model will be the first modern-day McLaren to ditch the venerable Ricardo-sourced 3.8-litre twin-turbo V8. In its place will be another Ricardo-built powertrain: a twin-turbocharged V6 mated to a plug-in hybrid system claimed to offer “astonishing levels of performance and a uniquely intense driving experience”.

Few details of the powertrain’s key specs have been revealed, other than that it will feature “medium-range” pure-electric running, which, Autocar understands, will be a touch under 20 miles. Total system output will be greater than the 562bhp offered by the 570S and is expected to be well in excess of 600bhp. A substantial increase in torque, enabled by the electric motors and available instantly from low revs, is also on the cards.

The downside will be an increase in kerb weight due to the battery and powertrain complexity. However, McLaren boss Mike Flewitt has been candid when previously speaking to Autocar. “I’ve always said my ambition was to launch the hybrid at the same weight as the outgoing car. We’re not going to hit that, but we’re going to be within 30-40kg,” he said. As such, a kerb weight of around 1500kg is expected. For reference, the hybrid Honda NSX is 1725kg.

The key ingredient to keeping weight down will be the all-new McLaren Carbon Lightweight Architecture (MCLA). It replaces the Monocell carbonfibre tub that made its debut on the MP4- 12C, although it was further developed as the MonoCell II for 2015. The MCLA tub will, like the Monocell, combine a carbonfibre central structure with aluminium subframes. It was designed and developed at McLaren’s Composites Technology Centre in Sheffield, where it will also be produced.

Flewitt claims the ultra-light new chassis is “every bit as revolutionary” as the MonoCell was when it was introduced and has “greater structural integrity and higher levels of quality”. It is also said to allow greater bodystyle and powertrain flexibility to help McLaren further differentiate models in each range and offer everything from pure-combustion models to fully electric powertrains. 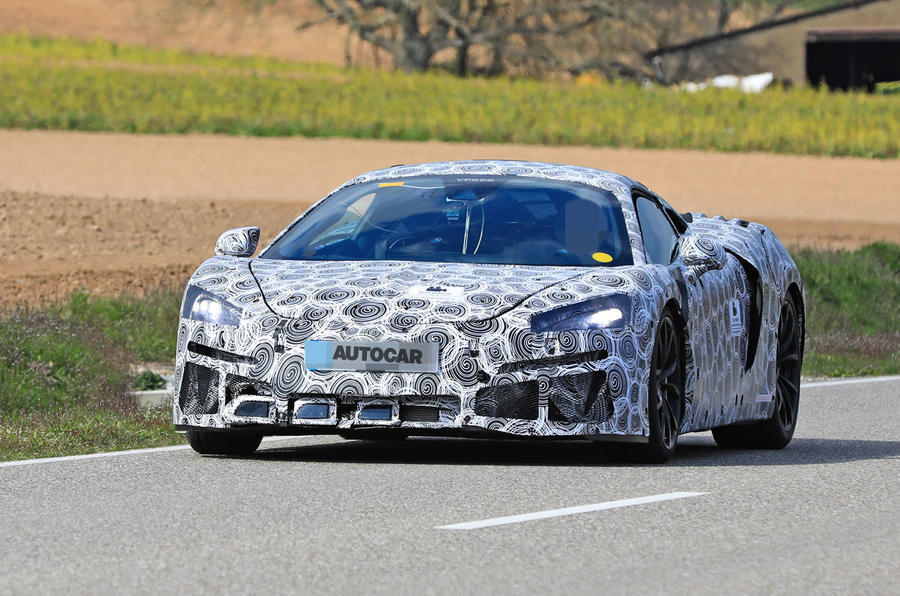 Although pretty much every internal aspect of the new McLaren is revolutionary, the design will take a more evolutionary approach. It’s believed that some inspiration will be taken from the Elva speedster, particularly at the front, and that car’s interior design is also meant to provide a hint to the forthcoming range.

A question mark remains over the name. McLaren has registered a number of name patents with the global brand database over the past 12 months, including Artura, registered in the UK, and the likes of Vion, Arkon and Veo in the US. In 2019, GTZ was also applied for. It’s highly likely that one of these names will grace the new hybrid model when the covers come off next year.

Why McLaren has form when it comes to hybrids

The hybrid revolution at McLaren is one born of necessity rather than desire, as it is with pretty much every car maker that wishes to sell a reasonable volume of cars in the 2020s without battling stringent regulations. Will that make the new Sports Series replacement a half-cocked compliance car? I very much doubt it.

Leaving aside the extraordinary engineering talent within its Woking HQ and beyond, it’s not as if McLaren hasn’t dabbled (to put it mildly) in electrification before.

The P1, one of the modern-day hypercar icons, featured an in-house-developed electric motor and could even travel six miles without ever awakening its twin-turbo V8. The 250mph-plus Speedtail may not have had a discernible EV range, but most people would forgive it that.

Arguably, the challenge here could be the brand’s trickiest yet – packaging all that know-how and at least some of the extraordinary performance into a car that is (in relative supercar terms) affordable, usable and quite easily mass produced.

The price is a big question: will it be a true successor to the 570S or nip uncomfortably at the heels of the 720S? That remains to be seen.

600bhp for the entry level? Calm down lads, the new car doesn't have to be faster to be better, pull your pants up and put the tape measure away

Plug in hybrids with crap range

A pure fudge to get around tax from either manufacturer or personal tax for the ultimate buyer. The recent survey showed full well that the battery elelment wasn't used enough, and a fair chunk of them just lug around the batteries and motors for nothing.

These things are all internet connected, so they should send data to HMRC, and if a certain percentage of the driving isn't done electrically then the full tax should be levied via self assesssment. This would kill the damned things pronto.

The point was to drive down emmissions, it's not working.

I can understand you are annoyed but sending data to HMRC is a huge NO in my book.

If your in the market for a car like this, would you really be that concerned if it was an EV or hybrid?, your buying a cat like this for the thrills, the increase in pulse rate, not how far it goes on a charge or a gallon, these types of cars are for some of them or, for the want of a better description a toy, and, if I was in the enviable position these drivers are, I know where my money would go!

If your in the market for a car like this, would you really be that concerned if it was an EV or hybrid?, your buying a cat like this for the thrills, the increase in pulse rate, not how far it goes on a charge or a gallon, these types of cars are for some of them or, for the want of a better description a toy, and, if I was in the enviable position these drivers are, I know where my money would go!

yeah, I missed this.