BACK TO ALL NEWS
Currently reading: 542bhp Velar SVR to be quickest Range Rover yet
UP NEXT
Jaguar Land Rover CEO on chips, EVs, quality and Discovery

542bhp Velar SVR to be quickest Range Rover yet

Land Rover has shoehorned a supercharged 5.0-litre V8 into a Range Rover Velar to create its quickest model yet.

The V8 variant will go on sale in October as a potent alternative to the BMW X6 M, mixing Land Rover off-road ability with savage performance.

Although it will share an engine with SVR Range Rovers, it is not yet known if it will follow suit of its eight-cylinder siblings and adopt the Velar SVR name. 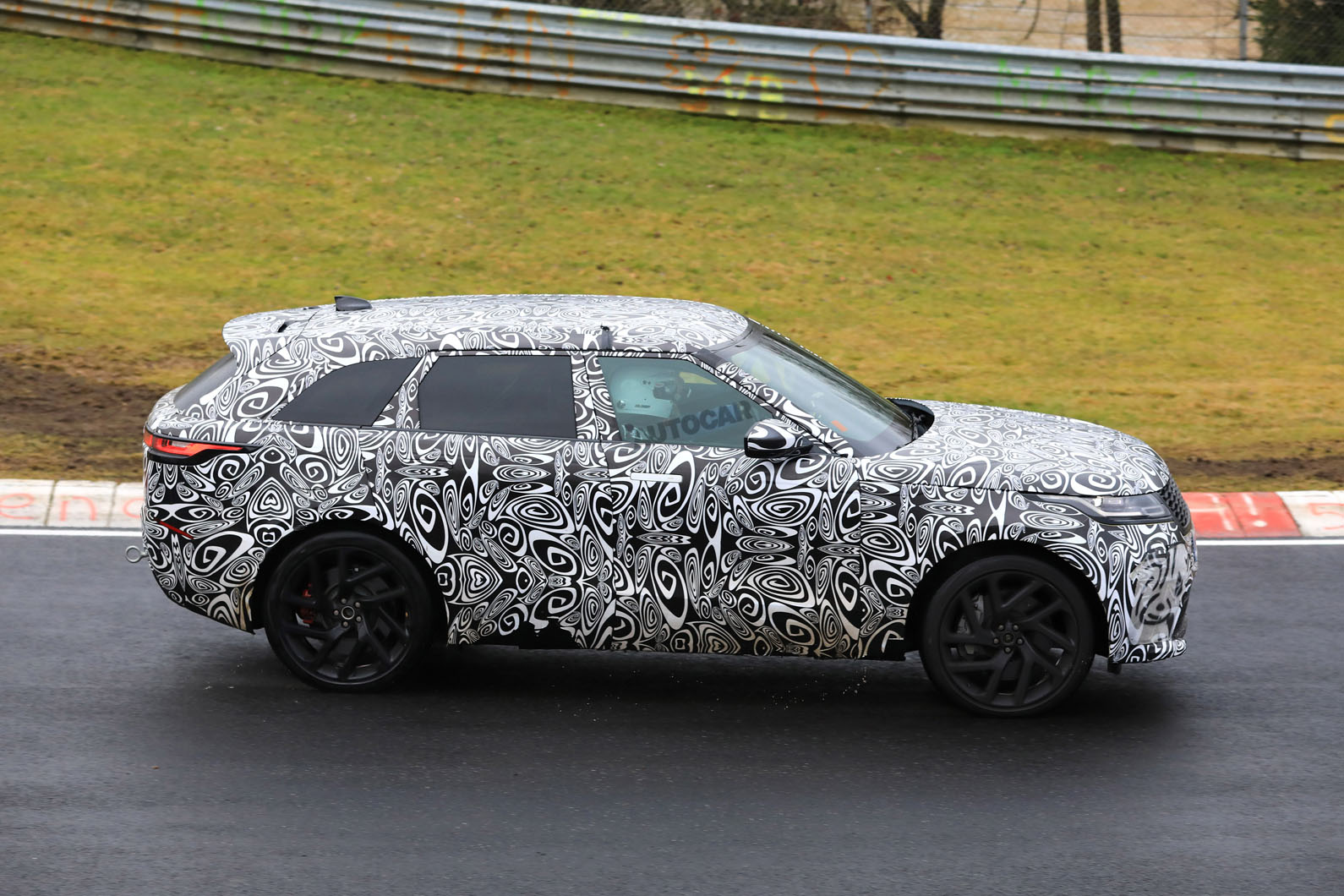 Nevertheless, insurance database information confirms that the hot Velar test car is using a 5.0-litre V8, so it's likely to be Jaguar Land Rover's ubiquitous supercharged motor in identical form to the Range Rover Sport SVR's. This means it'll produce around 542bhp and 502lb ft of torque to give the most potent Velar the ability to get from 0-62mph in around 4.2sec.

Although the SVR-engined Velar, which has most recently been spotted testing at the Nürburgring, will be cheapest model to feature hardware from the Special Vehicle Operations (SVO) high-performance division, it is likely to rank as the quickest, due to its smaller size and lighter weight.

The aluminium-based Velar will receive a host of SVR weight-saving measures to bring its kerb weight down to about 1800kg. While still no featherweight, that would make it a significant 465kg lighter than the X6 M and close to 500kg less than the Range Rover Sport SVR.

SVO's engineers are finalising the car's chassis set-up, which will include new performance settings for the air suspension, including a firmer, sportier mode designed for enthusiastic driving.

Beneath the camouflage, the test car’s rear bumper looks to have gained a diffuser between two new exhaust exits. It also has new, lighter wheels.

Along with the BMW X6 M, the Jaguar F-Pace SVR, which is due to arrive in June, will be a rival from the same stable as the Velar. That car is expected to get the same V8 but in more potent F-Type SVR specification, meaning it’ll produce 567bhp and be capable of 0-62mph in less than 4.0sec. 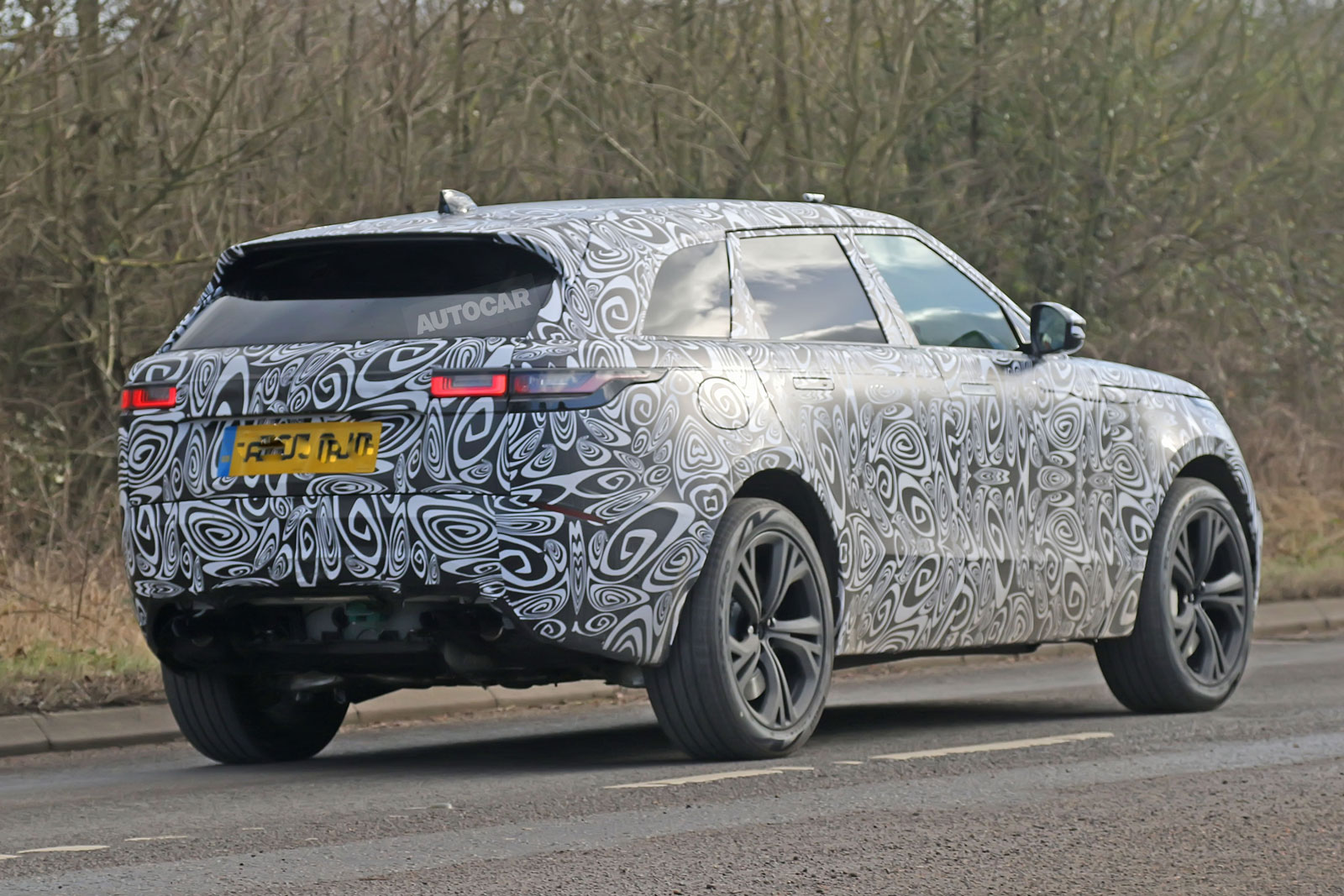 Despite their similarities, the SVR Jaguar F-Pace and Velar models will focus on slightly different areas of the market, with the Jaguar prioritising on-road performance and the Velar retaining more of its off-road ability.

The Velar SVR is expected to be priced at around £90,000, making it almost £10,000 cheaper than the larger Range Rover Sport SVR.

The invariably it’s RR that comes up the outside Lane, two fingers up to the speed limit, cruising at the three plus, not bothered about getting a speeding ticket, don’t we think it’s a lifestyle choice other than a considered choice?, by that I mean, you buy one because your expected to, because if your driving one of these everyone knows your minted.

I think the kerb weight

I think the kerb weight mentioned is ambitious. The current lightest petrol V-engined Velar is 1884kg, the basic hardware required to create an SVR would likely take it well over 1900kg. I wonder what weight-saving measures are then going to be used, that aren't token marketing efforts, to get it back down to c.1800kg?

I'm cautious as I'm recalling the previous Autocar claims for lightweight JLR vehicles, such as the XE that was going to be 1200-1250kg...

Power: A state of mind

Its hardly news thats its newest, quickest, fastest ...whatever 'est. easy to achieve given new technology and the relatively low power base which is used for their comparision..

Every SVR Rangie, Landie and even Jaguar before it and I presume after it will be the fastest/quickest .... its yje one way to ensure headlines..

AAh and the need for speed and the N'ring bragging rights...really worth nothing in the real world but it will appeal to those who ascribe to the "mine is bigger than yours" school of life.