BACK TO ALL NEWS
Currently reading: 2023 Pagani C10 to be revealed on 12 September
UP NEXT
Official: Ford Bronco 4x4 coming to Europe in 2023

Pagani has confirmed that its upcoming C10 hypercar, which is set to replace the decade-old Huayra, will be unveiled on 12 September.

The firm also showed off a sketch of the car's silhouette, revealing a swooping, teardrop-style design similar to that seen in an early leak of the C10.

The darkened side profile image comes after a prototype was recently spotted testing on the road.

Its design - although heavily camouflaged - seems to show a number of elements that also appeared in an alleged leaked rendering of the C10 in January.

The styling blends various elements of previous Pagani designs. The wide front grille and swooping bodywork hark back to the Huayra, while the teardrop cabin shape is reminiscent of the older Zonda. The angular front bonnet in particular evokes the styling of some of the earliest Pagani models, such as the C12 S. 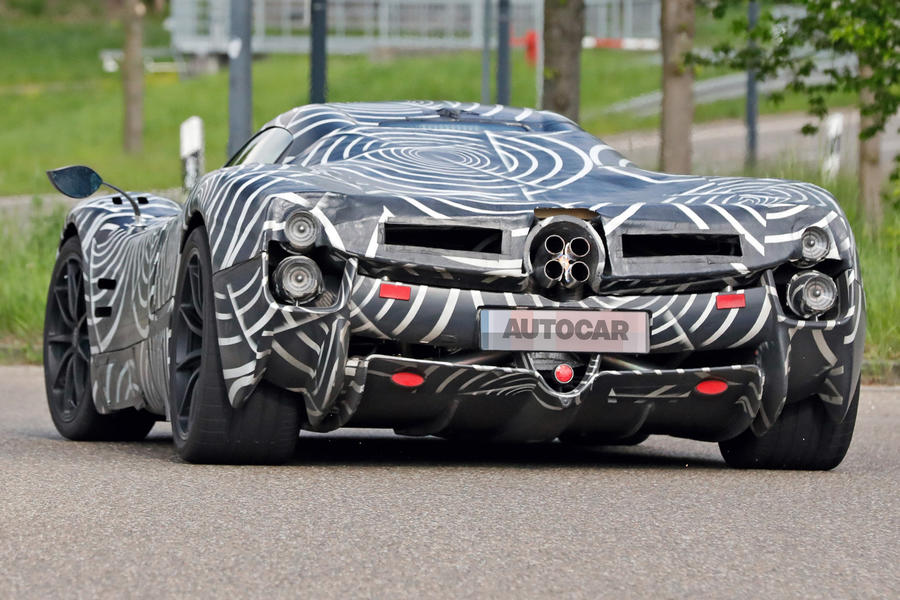 The two small rear wings revealed in the leaked rendering - also a homage to the early Pagani Zondas - appear to be covered over, with exit holes of the would-be wing cut into the rear camouflage and painted bodywork visible within.

Pagani’s signature centrally mounted four-exit exhaust - which has appeared on every model the firm has made - also features. This confirms our suspicions that the car will be powered by an internal combustion engine.

This test mule appears to stray away from Pagani’s traditional vertically split headlights with Perspex covers - a style that the company has used before on unique Zondas, such as the JC and LM one-offs - but these are most likely simply camouflage features, because the leaked rendering shows the car with separated lights. 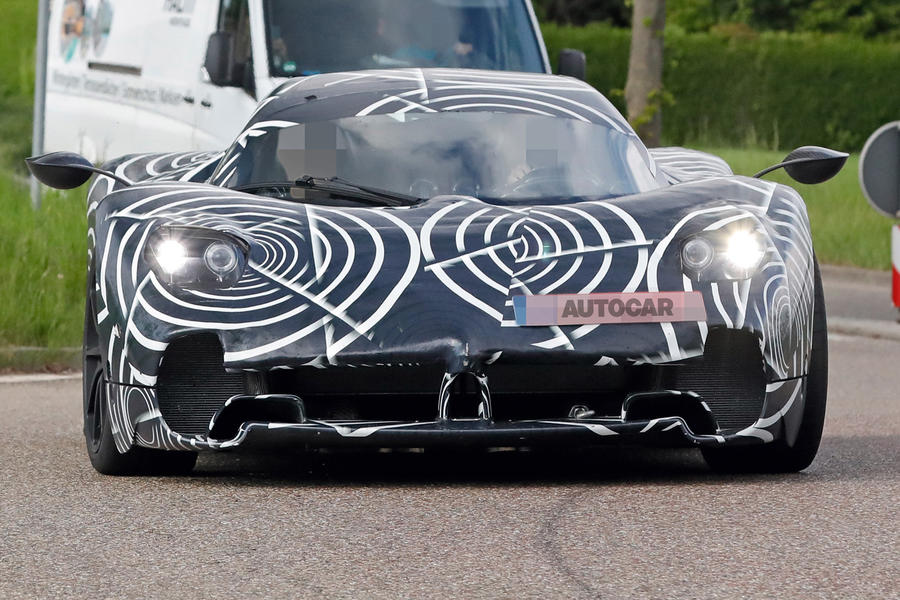 Small winglets in the front grille ahead of the huge radiators look to be possible aerodynamic aids, while subtle yet sizeable air intakes on the roof and across the rear buttresses will draw air into the engine bay.

These spy photographs have also given us our first look at the rear of the car. The overall design appears to be similar to the Huayra, although it features a pair of stacked rear lights that are more reminiscent of the Zonda F's.

The firm also seems to have dropped the Huayra’s gullwing doors. A barely visible shutline behind the window suggests that the C10’s doors will use regular hinges. The skylights depicted in the rendering can be seen on the roof through the camoflauge, albeit very faintly. 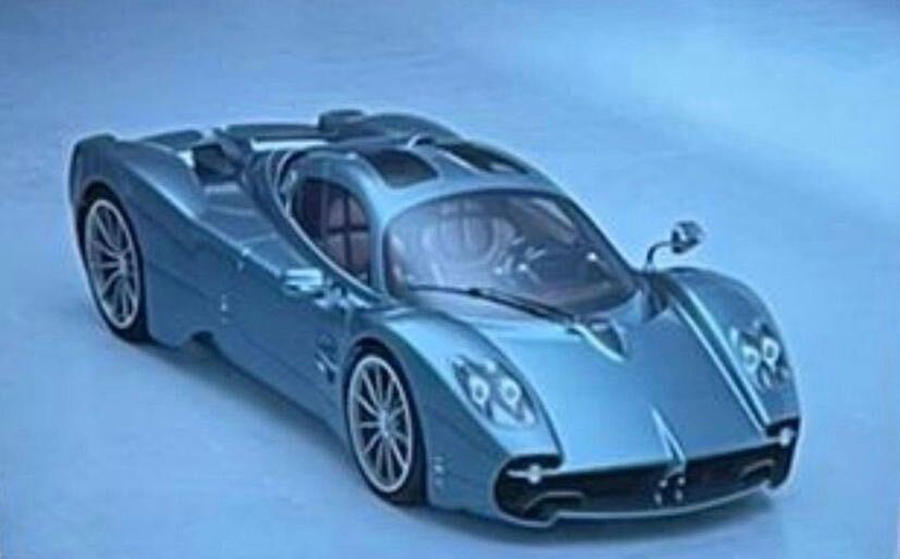 The previous rendering, allegedly of the C10, appeared on a new and anonymous Instagram account at the beginning of the year, accompanied by a picture of a document allegedly targeted at potential buyers, suggesting the leak came from an early customer presentation. The original pictures have now been taken down, but were widely circulated online.

The C10, which is said to already be sold out, is rumoured to use a new version of Mercedes-AMG's 6.0-litre twin-turbocharged V12. Buyers will be offered the option of a manual gearbox or a dual-clutch automatic with shift paddles.

Pagani is focusing on handling rather than power with the C10. In an interview with Italian magazine Quattroruote, founder and boss Horacio Pagani said the company has put more effort into weight-saving than any other aspect of the design. 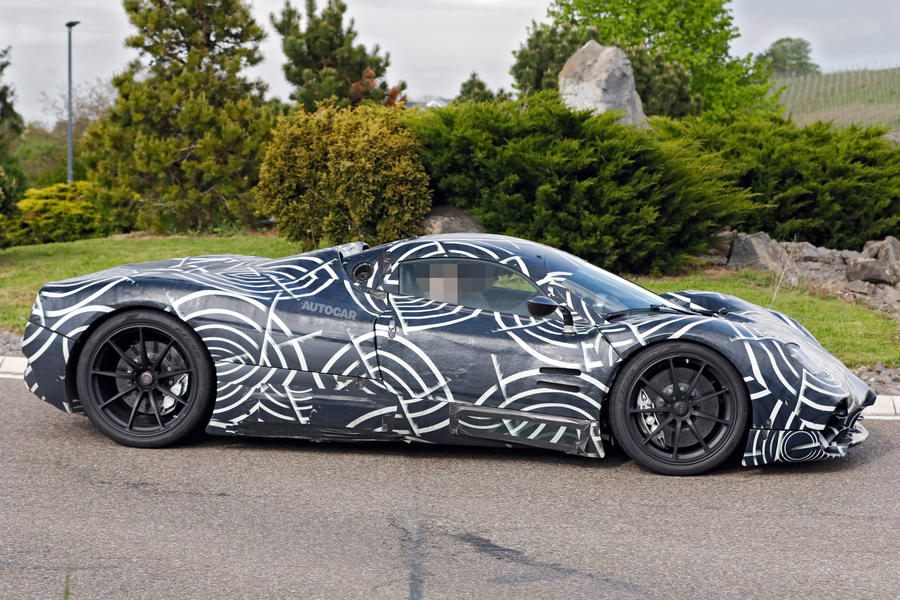 Pagani is planning to build up to 300 examples of the C10, including not only coupé and roadster variants but special models, too.

The Italian company has claimed that interest from American customers alone could have filled the entire production run.

The C10 is expected to be the last pure-combustion Pagani, with future models being hybridised. It will be revealed later this year.

Log in or register to post comments
BlahBlah43 18 May 2022
Sounds fantastic. Lightweight, manual V12 is the dream.
Peter Cavellini 18 May 2022

As Greenday sang: when September....ends?, anyway, you can't judge from a black image with a few white squiggles on it what it will really look like, your imagination kind of creates your own personal image, might actually be better than the delayed Mercedes?