BACK TO ALL NEWS
Currently reading: 2018 Vauxhall Corsa hatch spotted with revised interior
UP NEXT
EV start-up Aehra to launch “ultra-premium” SUV and saloons

The next-generation Vauxhall Corsa will offer more interior space when it arrives in 2018, as well as gaining technology from the new Vauxhall Astra.

Autocar’s spy photographers have again spotted a five-door Opel Corsa hatchback running on the Continent, showing how the rebadged British model will look.

The development car’s heavy camouflaging hides smaller details, but it looks as though the front grille has been raised and made slimmer, likely giving it a look similar to that of the new Astra. There’s a bar across the middle of the grille, which will presumably be a chrome strip with the Vauxhall badge in the middle.

Inside, a light refresh has increased the size of the infotainment screen over the current model, although much of the trim and materials appear similar to before.

The car’s headlights are also well covered, but the outline of a more aggressive design can be seen, suggesting the Corsa will get an angrier face.

The front wheels of this development car sit significantly closer to the front than the current production model, suggesting both axles of the 2018 Corsa will be pushed out into the corners in a bid to increase cabin space. However, the car’s bonnet looks shorter than that of the current Corsa, meaning overall dimensions might not change that much. 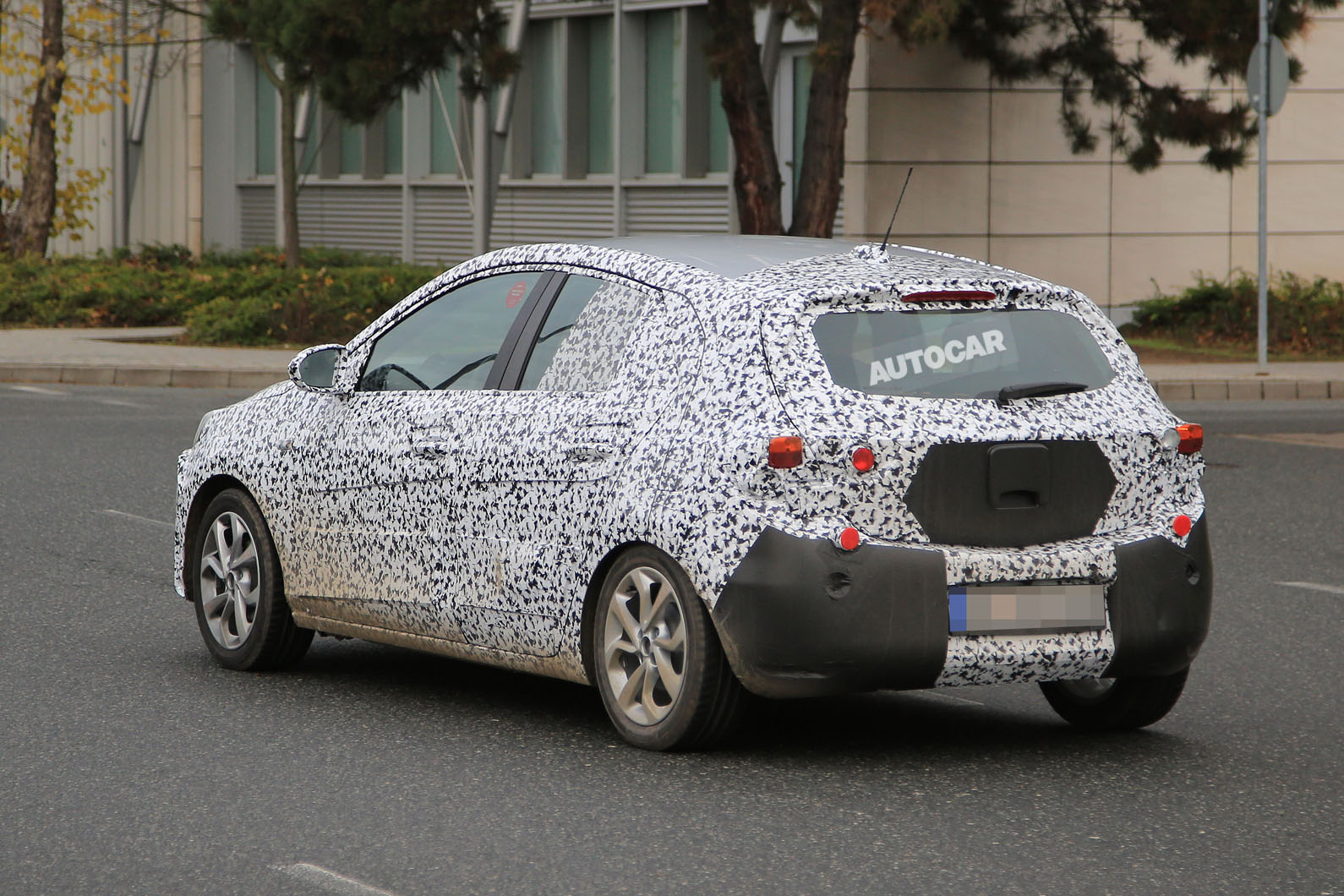 At the back, the outline of slimmer tail-lights can be seen, but covers prevent any other design details from being seen at this stage.

Inside, the Corsa will follow the lead of Vauxhall’s other models and feel more premium with more flashy and decorative foils on the dash and door covers. The touchscreen infotainment system will likely use software first featured in the Astra and it’ll come with optional Apple CarPlay/Android Auto.

All variants of the new Corsa will be built upon a smaller version of the new Astra’s underpinnings, meaning both the hatchback and saloon will benefit from significant weight savings over the predecessors.

Engines will likely be a familiar lineup of turbocharged three and four-cylinder units, with the fastest VXR model making use of a 1.6-litre turbo producing in excess of 202bhp.

The current Corsa is offered in three and five-door bodystyles, and the same is expected for the next-gen model. Before this latest sighting of a hatchback, only a Corsa saloon development car (shown in gallery) had been seen. However, this bodystyle won't be offered to the UK market.

there does appear to be an acknowledgement that drivers need to be able to see where they are going. The 'a' post and windscreen look to have been substantially changed on this model with a much less aggressive angle and removal of the daft small window in front of the side mirror. This should help reduce the dangerous blind spots and interior window reflections caused by the old design.Well done Vauxhall.
Straff 23 March 2017

My wife had a 2008 Corsa and now has a 2015. There is no comparison whatsoever with the old car in the way the new one drives and the interior feels; it is a huge step forward with better build quality and interior ambience. It's also faster, smoother and much nicer to drive.
Straff 23 March 2017

My wife had a 2008 Corsa and now has a 2015. There is no comparison whatsoever with the old car in the way the new one drives and the interior feels; it is a huge step forward with better build quality and interior ambience. It's also faster, smoother and much nicer to drive.
View all comments (6)